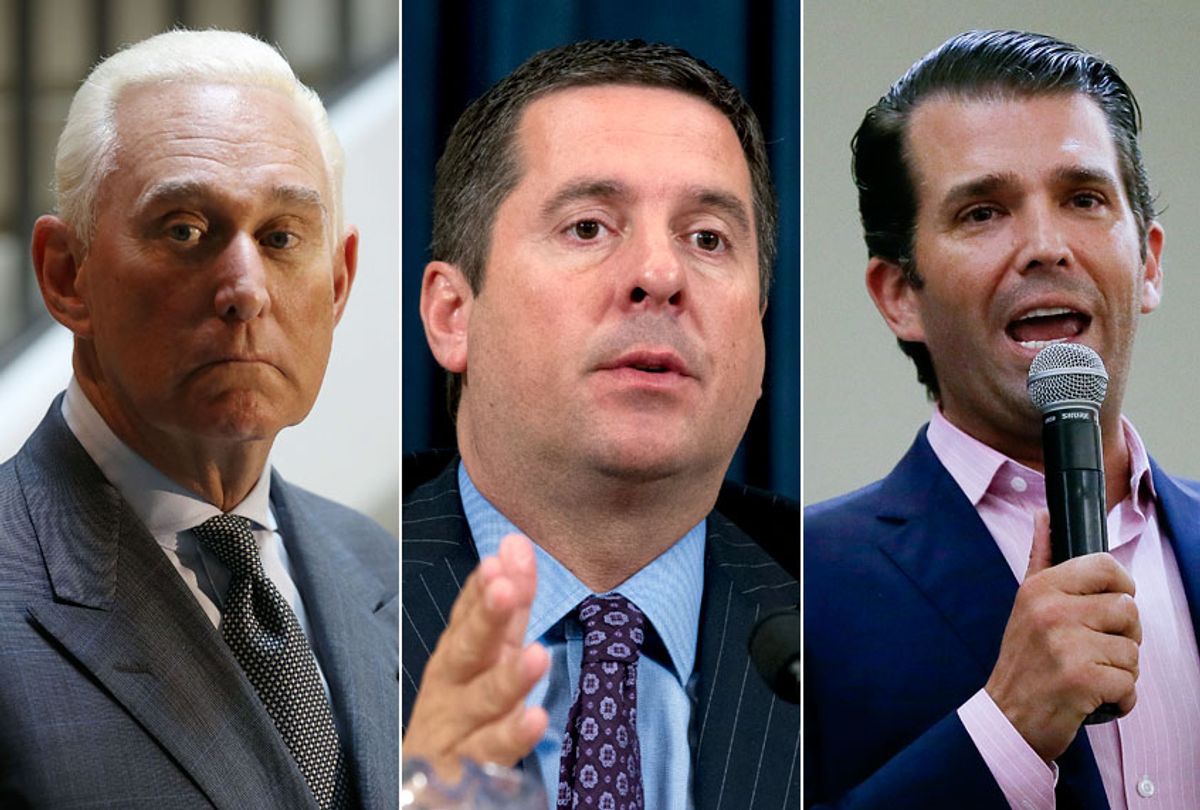 Michael Cohen’s surprise guilty plea in federal court on Thursday not only turns up the heat on close intimates of Donald Trump, like his namesake son and beloved daughter, it once again turns the spotlight on those Republicans in Congress most complicit in the coverup of apparent cooperation between the Trump campaign in 2016 and Kremlin-linked actors.

The president’s former personal lawyer pled guilty to charges he lied to Congress. While Cohen testified in 2017 before the Senate and House Intelligence Committees — both run by Republicans — only one committee referred his testimony to special counsel Robert Mueller for review. According to Democrats, Cohen’s testimony before the House has never been made available to the special counsel.

For nearly two years, Donald Trump has had the benefit of a former campaign surrogate acting as his personal missile-blocking defense system. Rep. Devin Nunes, R-Calif., has run interference on the Trump-Russia probe as chair of the House Permanent Select Committee on Intelligence, blocking the release of pertinent information and obfuscating any findings that could be construed as damaging to Trump.

“We were blocked from subpoenaing Deutsche Bank and other banks to see if there is a financial relationship between Russian oligarchs and the president,” Democratic Rep. Eric Swalwell, D-Calif., a member of the House Intelligence Committee, said during an interview this week on PBS NewsHour. On Thursday, as Cohen entered his guilty plea, German law enforcement officials raided the Frankfurt offices of Deutsche Bank, Trump’s largest bank lender. There is no known connection between the raids and the Russia probe, but speculation has been rampant.

Cohen’s admission in open court on Thursday makes clear, however, there is still time to mete out real legal consequences for anyone who might have broken the rules while Devin Nunes was pretending to exercise congressional oversight.

“I think Michael Cohen’s guilty plea underscores something else, and that is we believe other witnesses were untruthful before our committee. We want to share those transcripts with Mr. Mueller," Rep. Adam Schiff, D-Calif., told reporters on Thursday. Schiff is set to replace Nunes as House Intelligence chair in January. Nunes blocked for Trump’s closest allies and used his subpoena power “essentially as a way to supplement the president’s legal defense fund,” Schiff said.

Nunes, a Trump loyalist who was on his transition team, infamously used his position of power to obstruct investigative avenues in the House Russia probe. He openly worked with White House aides on selective leaks and ultimately ended his investigation last March, concluding there was “no evidence of collusion” between Russian agents the Trump campaign. He even threatened to hold former Attorney General Jeff Sessions in contempt for not declassifying a memorandum that he claimed would prove Mueller’s investigation was an abuse of power. The "Nunes memo" became a right-wing cause célèbre, and Trump eventually declassified it on his own. It proved nothing.

Even in the shameless environment of the Republican congressional majority, Nunes' antics finally became too much, Rep. Mike Conaway of Texas eventually took over the investigation. He didn't exercise any serious oversight either, but did not behave like quite such a toady and buffoon.

Now Democrats, emboldened by the Cohen plea, plan to strike big on the goldmine of transcripts Nunes sat on for many months.

“[B]uried beneath the Capitol at the House Intelligence Committee are pages of lies from witnesses who testified, and their transcripts sit there right now, not being able to go to Bob Mueller, despite Democratic efforts to try to release them to Bob Mueller, because Devin Nunes and the Republicans each time have voted against them,” Swalwell said on Thursday.

Some Trump allies who have previously testified under oath in front of the House Intelligence Committee may now be a bit worried after federal prosecutors went after Cohen for lying to Congress. The biggest names on that list would include include longtime Trump associate Roger Stone and Donald Trump Jr., the president's eldest son.

“We took these witnesses at their word, and they weren't worthy of being taken at their word," said Swalwell. "So now we can contact third-party providers and vendors and subpoena their records to see if what Roger Stone and Donald Trump Jr. and Michael Cohen were saying was true or not.”

According to NPR, Don Jr. told the Senate Judiciary Committee in September 2017 that although there had been negotiations surrounding a prospective Trump Tower in Moscow, they concluded without result "at the end" of 2014, which is quite different from what Cohen now claims.

Cohen’s plea deal has even angered Republicans in the Senate. "This is a reason people shouldn't lie when they're in front of a congressional investigation," Senate Intelligence Committee chair Richard Burr, R-N.C., said after Cohen’s plea deal on Thursday.

Sen. Marco Rubio, R-Fla., told NBC News it was "possible" that other witnesses had lied. "I think there probably will be some efforts to reinterview some people as a result of what happened today."

Donald Trump Jr.’s infamous 2016 meeting at Trump Tower with a Kremlin-connected Russian lawyer peddling “dirt” on Clinton will almost certainly come back up for further review after Democrats take control in January. House Democrats specifically want to look at Don Jr.'s phone records around that time.

“That Trump Tower meeting ... we know that a couple days before the meeting, Don Jr. made a phone call to Russia, and then made a call that was blocked on the cell phone transcript that we have, and then called back to Russia,” Swalwell explained in the PBS interview. “We have strong evidence that suggests that might be communication between Donald Jr. and his father, which would give knowledge by candidate Trump of the meeting that they have so far denied he ever knew about.”

Nunes “refused to look at the phone records so that we could find out," Schiff told USA Today, "because [Republicans] were afraid of what the answer might be.”

For his part, Roger Stone says he still stands by his earlier congressional testimony. But according to Stone's close associate and right-wing birther Jerome Corsi, Stone expects to be indicted for “giving false information” to the special counsel.

“I stand by my statement to the House Intelligence Committee and can prove it is truthful if need be,” Stone said in a recent statement.

Even if Mueller does not indict Donald Trump or his close allies, Democrats empowered with oversight claim they’ll be steadfast in their quest for accountability. A lot has changed since now-retired Rep. Jason Chaffetz of Utah, then the Oversight Committee chair, said in 2016 that he was looking forward to investigating Hillary Clinton “for years” over the Benghazi attacks.