Ivanka and Donald Trump Jr. may be investigated by Robert Mueller for Moscow Trump Tower: report

Robert Mueller is looking into Ivanka and Don Jr. 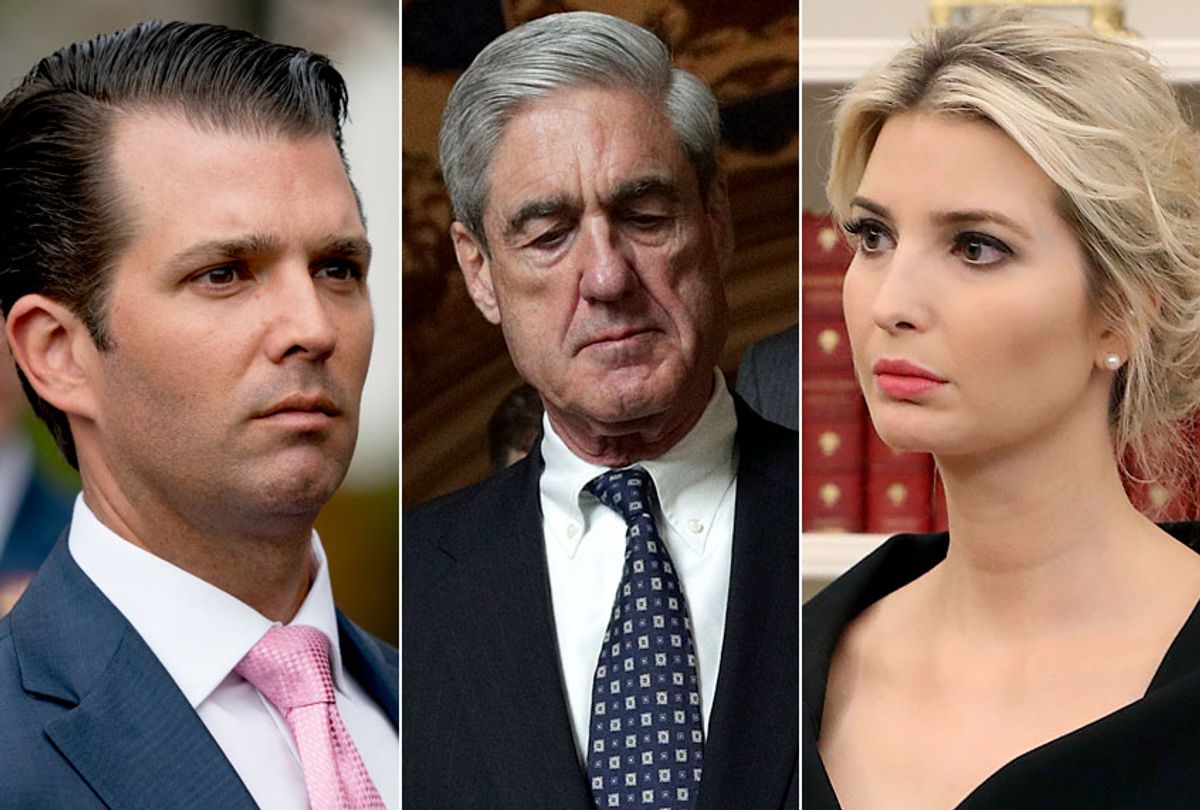 Robert Mueller, the special prosecutor who is investigating allegations of collusion between Donald Trump's 2016 presidential campaign and the Russian government, is reportedly scrutinizing Ivanka Trump and Donald Trump Jr.'s efforts to build a Trump-branded skyscraper in Russia before their father pursued a White House bid.

Ivanka, the president's eldest daughter and a senior White House adviser, and Don Jr., the president's eldest son, allegedly worked to build a Trump Tower in Moscow for several years, concluding their efforts in 2013, Yahoo News reported on Friday. "They were not looking at any other deals after that," a source told the news publication.

The luxury real estate development, which never materialized, is at the center of a plea deal Michael Cohen, the attorney who spent many years working as Trump's personal "fixer," reached with Mueller on Thursday. Cohen pled guilty to lying to Congress about his contacts with Russia during the 2016 presidential campaign, specifically his efforts to build a Trump Tower in Moscow.

Trump's children's efforts to secure a Trump real estate deal in Moscow were separate from Cohen's, Yahoo News reported. "Michael was looking at that deal," a source told Yahoo News. "Don and Ivanka knew about it and Don testified to the Senate Judiciary Committee that he was peripherally aware of it. "

Ivanka and Don Jr. were reportedly aware of Cohen's attempts to build in Moscow in 2016. "That's why we're so perplexed Cohen would lie about briefing them because no one's ever disputed that they knew he was looking at it," the source added.

Trump on Friday tweeted that his business dealings were "very legal" and "very cool." But, Cohen admitted in federal court on Thursday that he was pursuing a Trump real estate deal at the same time on behalf of the then-presidential candidate. He also revealed that Trump was personally aware of the Moscow project, signing a letter of intent and discussing it with Cohen on two other occasions.

Court documents reveal that Cohen made the false statements to "minimize links between the Moscow Project and [Trump]" and to "give the false impression that the Moscow Project ended before 'the Iowa caucus and . . .  the very first primary,'" in an attempt to limit Mueller’s ongoing inquiry.

The president has vehemently denied any collusion with Russia during the presidential campaign and has repeatedly railed against Mueller's investigation into the matter.

He told reporters on Thursday, "When I'm running for president, that doesn't mean I'm not allowed to do business." He said Cohen is "a weak person and not a very smart person," and that his company's plans in Moscow was "a well-known project" that he ultimately aborted.

Earlier this week, Trump accused Mueller's team of "viciously telling witnesses to lie about facts" and comparing the probe to the McCarthy period, when former Sen. Joseph McCarthy, R-Wis., accused hundreds of Americans of being communists or communist sympathizers in the 1950s.