"If they have to, they're gonna use lethal force," President Donald Trump said on Thanksgiving. "I've given the OK" 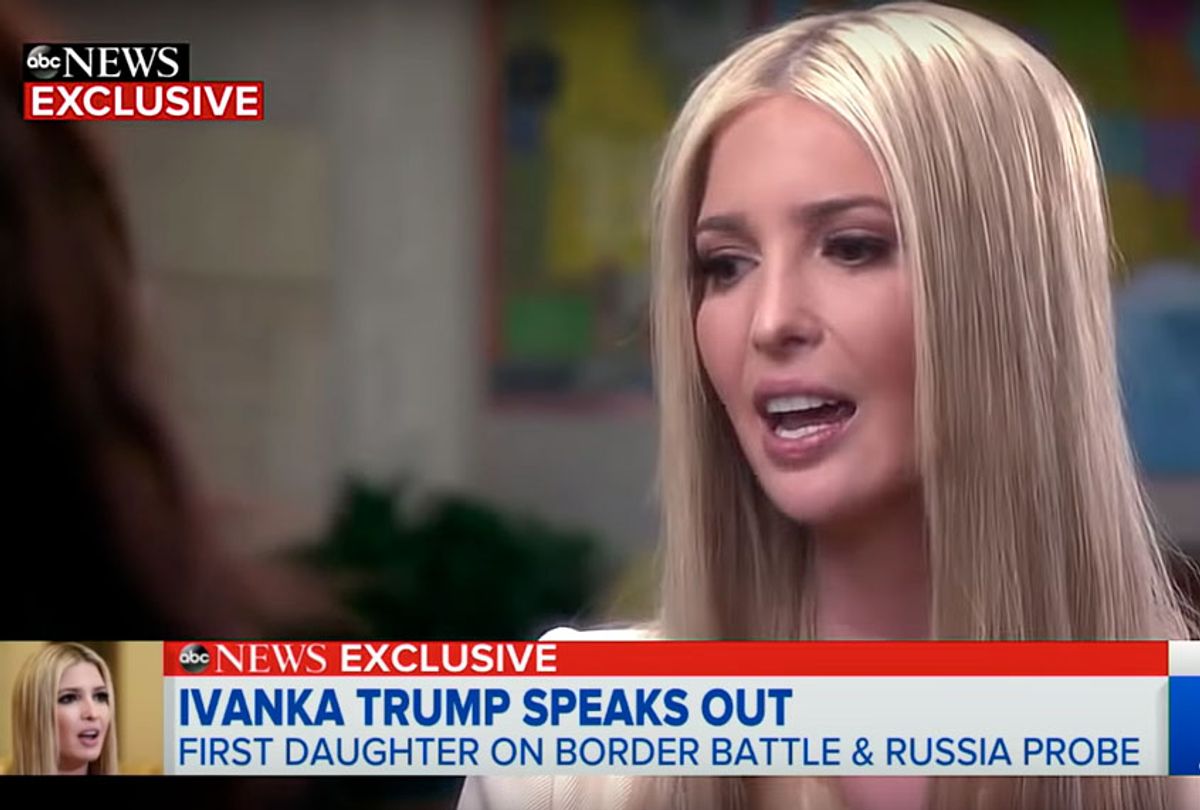 Ivanka Trump, the president's eldest daughter and a senior White House official, appeared confused about her father's immigration policy, specifically his decision to allow the military to "use lethal force," if necessary, against migrant families and asylum-seekers at the U.S.-Mexico border.

In an interview with Good Morning America's Deborah Roberts, Trump was asked whether she was concerned that her father had given troops the authority to use lethal force — a practice which has been widely condemned as "unnecessary" and "illegal," because the Homeland Security Department has concluded that the unarmed families attempting to enter the U.S. posed only a "minimal" threat. Pushing back, she denied that her father had moved to allow troops to use such force.

"I don't believe that's what he said, but his primary role as commander in chief is obviously to protect the nation's borders. He has to protect our country's security," she said of the president. "But I don't . . . lethal force in this case would — that is not I think something that anyone is talking about."

However, the president told reporters on Thanksgiving that he specifically authorized American troops deployed at the border to use deadly force.

"If they have to, they're gonna use lethal force. I've given the OK," Trump said. "Yeah, if they have to — I hope they don't have to . . . but you're dealing with rough people."

When Roberts pointed out to Ivanka Trump that her comments stood in direct contrast to those her father made on camera just days prior, she attempted to downplay her apparent error.

President Donald Trump on Monday denied the use of tear gas against children, despite photo and video documentation that showed otherwise. He told reporters at the White House that border agents "had to use [force], because they were being rushed by some very tough people and they used tear gas."

During her interview with Roberts, Ivanka Trump called the photos and videos that showed migrants and asylum-seekers running away from the border while gagging and screaming "heartbreaking" and "devastating," but agreed with her father that helping secure the southern border is the top priority.

"I think, like any other person with a heart, it's devastating to see the images and seeing children put at risk. Running towards the border is heartbreaking," she said. "But there are people in the caravan who are not so innocent . . . [The president] has to protect our country's security."

She also revealed that she has weighed in on the situation, adding, "Nobody wants to see anyone get hurt. For many months, we've talked about finding that bipartisan solution, fixing this border crisis. No one can now look at this situation we have with the caravans and say that our border is not in crisis. It is."

This is not the first time that Ivanka Trump, who claims to be an advocate for women and children, was criticiitzed for her seemingly contradictory stance on those issues as applied to migrants. The first daughter remained publicly silent for the majority of the time that the chaos of the administration's child separation policy unfolded. As my colleague Joseph Neese wrote:

The silence . . . lead many prominent figures on daytime television to ask, "Where is Ivanka?"

On MSNBC, Mika Brzezinski, the co-host of "Morning Joe," declared that Ivanka Trump had once again missed the mark "every step of the way."

The deployment of tear gas at the border has been widely condemned. Over the weekend, the Mexican government announced they would seek a full investigation.

Homeland Security Secretary Kirstjen Nielsen on Monday released a lengthy statement about the crisis and chemical violence at the border, defending the president and the tactics used by law enforcement.

"The violence we saw at the border was entirely predictable," Nielsen wrote on the DHS Facebook page. "This caravan, unlike previous caravans, had already entered Mexico violently and attacked border police in two other countries. I refuse to believe that anyone honestly maintains that attacking law enforcement with rocks and projectiles is acceptable. It is shocking that I have to explain this, but officers can be seriously or fatally injured in such attacks. Self-defense isn't debatable for most law-abiding Americans."