Trump denies use of tear gas on migrant kids at border despite evidence: We don't use it on children

From Ferguson to Standing Rock, chemical warfare from law enforcement is neither new or limited to asylum seekers 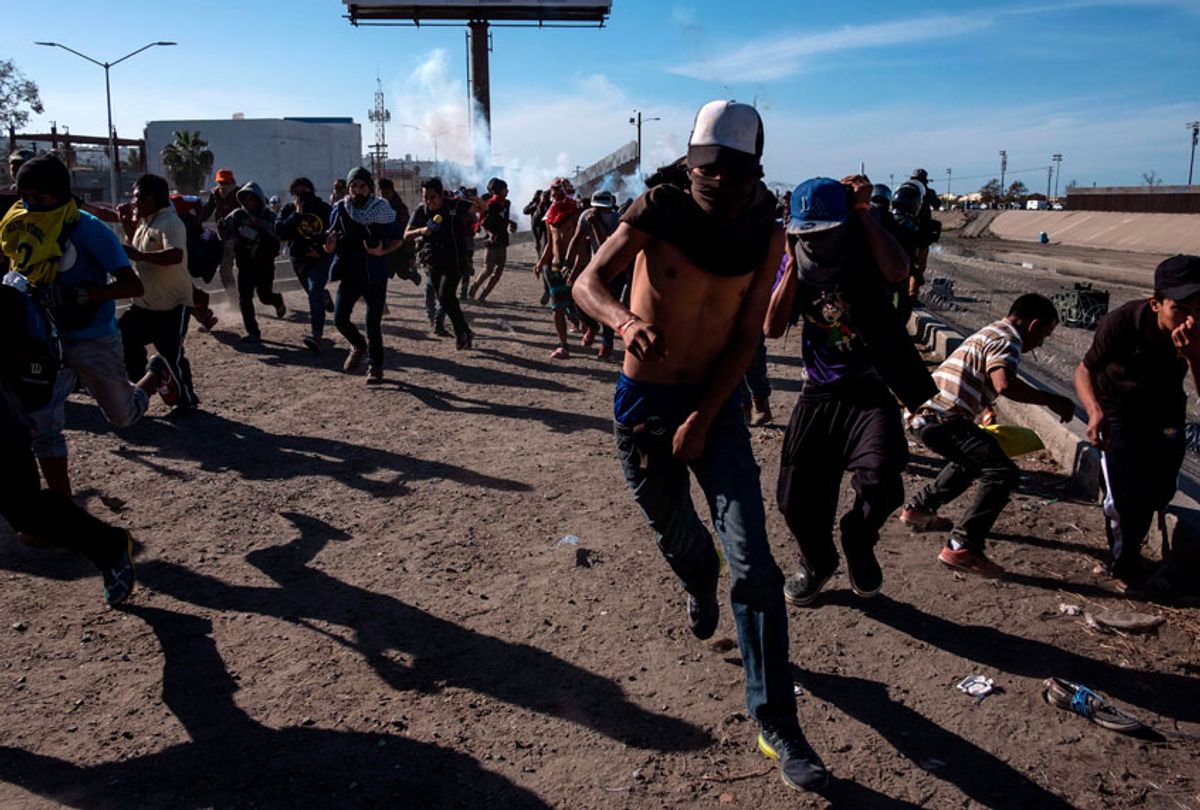 From Sunday afternoon on, the world watched in horror as photos and videos circulated of migrant families running away from the the U.S.-Mexico border, gagging and screaming, after U.S. Border Patrol agents inundated the crowd with tear gas. One of the most distributed and disturbing images was of a Honduran mother, Maria Meza, tightly gripping the arms of her young daughters as she dragged them away from the border area, tear gas trailing closely behind them.

One of the girls is in diapers and the other is barefoot. Her adolescent daughter runs alongside them. Meza told Reuters that she "thought she was going to die because of the gas" and added that "there were lot's of children [there] – not just mine."

U.S. Border Patrol shut down a major border crossing near San Diego for several hours on Sunday, as Central American asylum seekers tried to push through the San Ysidro port of entry. Border officials say some migrants threw rocks and projectiles, and border agents responded by firing into the crowd with tear gas.

But the deployment of tear gas against asylum-seeking migrants from Central American was widely condemned over the weekend, and now the Mexican government is seeking a full investigation, according to Democracy Now!

On Monday, President Donald Trump denied the use of tear gas against children, despite photo and video documentation that proved otherwise. He told reporters at the White House that border agents "had to use [force], because they were being rushed by some very tough people and they used tear gas," according to CNN. "Here's the bottom line: Nobody's coming into our country unless they're coming legally," Trump added.

"Is it OK to use tear gas on children?" one reporter asked, according to CNN.

Department of Homeland Security's Secretary Kirstjen Nielsen released a lengthy statement about the crisis and chemical violence at the border on Monday, defending Trump and the tactics used by law enforcement.

"The violence we saw at the border was entirely predictable," Nielsen wrote on the DHS Facebook page. "This caravan, unlike previous caravans, had already entered #Mexico violently and attacked border police in two other countries. I refuse to believe that anyone honestly maintains that attacking law enforcement with rocks and projectiles is acceptable. It is shocking that I have to explain this, but officers can be seriously or fatally injured in such attacks. Self-defense isn’t debatable for most law-abiding Americans."

No border agents were seriously injured as they wore protective gear, according to a Custom and Border Protection official. Moreover, in the history of Border Patrol, not a single agent has been killed by a rock, said investigative journalist John Carlos Frey.

Nielsen said the majority of migrants in the caravan, which she described as "far larger and more organized than previous ones," are not eligible for asylum in the U.S. "Historically, less than 10% of those who claim asylum from #Guatemala, #Honduras, and #ElSalvador are found eligible by a federal judge," she continued. "Most of these migrants are seeking jobs or to join family who are already in the U.S. They have all refused multiple opportunities to seek protection in Mexico or with the UNHCR, the UN Refugee Agency. Seeking employment or family reunification are not grounds for asylum under our laws, or any international obligation."

The DHS Secretary also charged the "predominantly male" caravan of using "the limited number of women and children" as "'human shields' when they confront law enforcement."

Nielsen also revived many of Trump's fear-mongering claims about the caravan in the lead-up to the midterms. "We cannot confirm the backgrounds and identities of all caravan members which possess a national security and public safety risk to our country," she added. "However, at this point we have confirmed that there are over 600 convicted criminals traveling with the caravan flow. This includes individuals known to law enforcement for assault, battery, drug crimes, burglary, rape, child abuse and more. This is serious. Additionally, Mexico has already arrested 100 caravan members for criminal violations in Mexico."

Nielsen lauded the Border Patrol's response, saying it mirrored the use of "nonlethal force" under the Obama administration in 2013 and "prevented further injury to agents and a mass illegal rush across the border."

It is true that the use of chemical warfare and physical violence from law enforcement is neither new or limited to asylum seekers at the border. In 2014, police in Ferguson, Missouri, shot tear gas at protesters and residents after the police killing of the unarmed teenager Michael Brown. Two years later, in 2016, law enforcement deployed water hoses in freezing temperatures and tear gas against unarmed protesters at the Standing Rock Indian Reservation, who were opposing the construction of the Dakota Access oil pipeline.