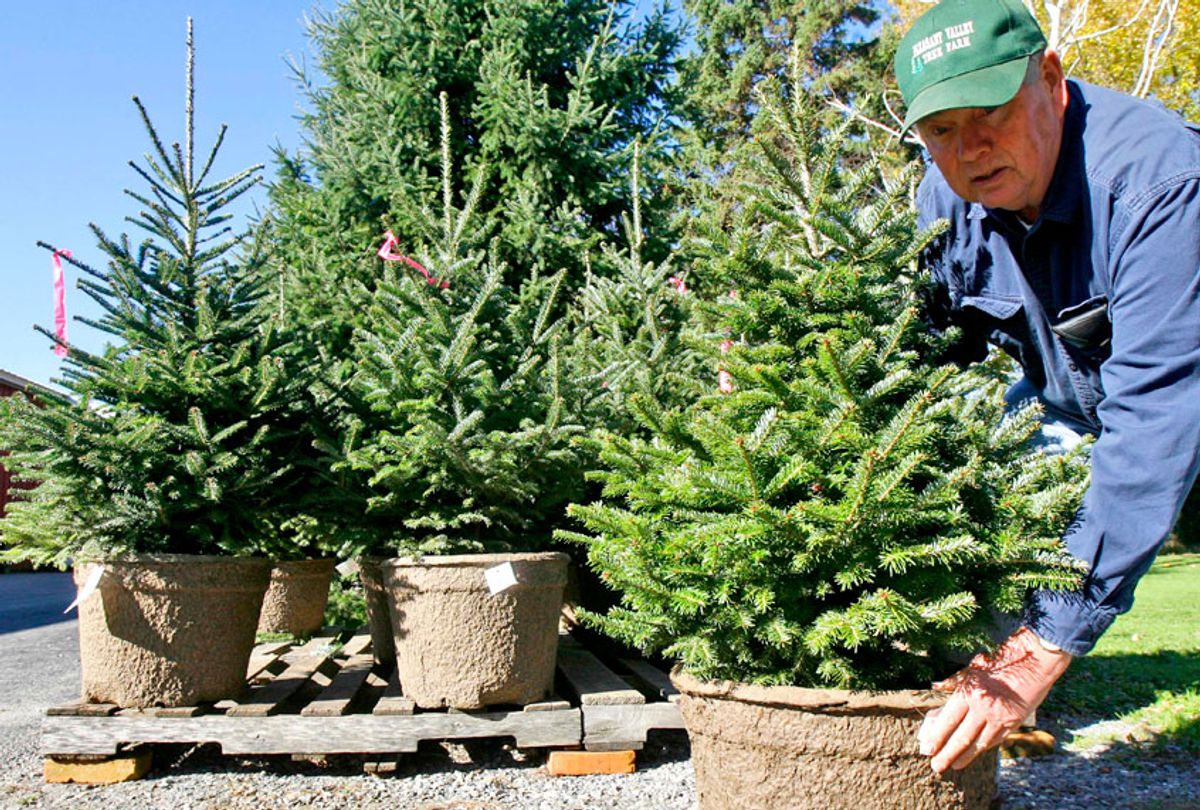 It’s an unfortunate holiday paradox: more festivities means more garbage in our landfills. From wrapping paper to holiday cards, one million extra tons of waste is accounted for each week from Thanksgiving to New Year's Day, a 25 percent increase from the average week in America.

As scientists continue to warn the world about the catastrophic impacts of climate change, many consumers choose to embrace a more environmentally-friendly approach this holiday season. However, the big green dilemma is often only discussed when forced to pick a Christmas tree: do you buy a real tree from a lot or an artificial one?

Yet few consumers realize there's actually a third way — adopting a living Christmas tree — that is by far the most sustainable option.

Though the precise meaning of a "living Christmas tree" varies depending on the organization — not all are traditional pine trees, for instance — in general, they are potted trees that consumers adopt for the holiday season and decorate as one would a normal Christmas tree. In some cases, consumers keep them and re-plant them themselves; in others, consumers rent them, often from urban forestry nonprofits, who then re-plant them outside after Christmas and re-integrate them into the urban canopy.

When asked what the greenest option is — between a living Christmas tree, a dead one from a traditional lot or an artificial one — Clint Springer, the Director of Environmental Science and Sustainability Studies and Associate Professor at St. Joseph's University, told Salon a living Christmas Tree is best for the environment, especially when you’re thinking about what will slow the rate of atmospheric carbon dioxide production.

“I typically think about climate change with my research, and anything that slows the rate of carbon dioxide in the atmosphere is a positive thing in my mind,” Springer said. “And that’s a tree that lives a long and happy life, so a potted tree would be best.”

Over the past decade, there has been some confusion as what is “environmentally-friendly” when selecting a Christmas tree. In 2010, the New York Times published an article asking “How green is your artificial tree?” where one consumer explained that she chose an artificial one to keep real trees from getting cut down.

This logic does not exactly add up. First, Christmas trees are a crop. They are harvested and grown to be sold to consumers. The idea that Christmas trees — which range in breed — are endangered may stem from the late 19th century practice of harvesting trees directly from forests, which caused great concern among the environmentally-minded at the time.

Now, Christmas tree production is an industrialized, farmed affair.  “It’s like cutting down corn to make tortillas because it’s going to be replanted,” Springer said.

In regards to artificial trees, their production and recycling comes at the expense of the environment, since they are often made of metal, steel and polyvinyl chloride (PVC). They’re mostly manufactured in China, too, which means you have to factor in carbon emissions from transportation.

Peter Hambly, the Director of Communications at the Carbon Trust, a nonprofit environmental organization based in the United Kingdom that helps businesses and organizations reduce their carbon emissions, told Salon the only way artificial trees can be environmentally-friendly is if they’re used for 8–10 years. Even then, they’re difficult to recycle.

“Because [of] the way the plastic and metal is combined in the tree, it is quite hard to recycle — it takes too long,” Hambly told Salon. “The most sustainable thing to do is if you get one potted and replant it.”

In San Francisco, urban forestry group Friends of the Urban Forest, in partnership with the San Francisco Department of the Environment, sells living potted trees. After Christmas, the nonprofit collects the trees and replants them around the city. Friends of the Urban Forest have been in the living Christmas tree business for 10 years, and have seen a steady rise in customers. In 2009, they had 21 orders. In 2015, 30. Last year it increased to 147.

Flanagan notes that the trees don't look as plump as artificial or farmed (dead) Christmas trees; he jokes that the organization specializes in “Charlie Brown trees."  Indeed, they look sparser, by virtue of having their root structure confined to a pot. And in the case of Friends of the Urban Forest, many of the trees aren't traditional pines, but other breeds like primrose and olive that do better in the urban forest of balmy San Francisco.

Regardless, those who choose to adopt are happy, and find more meaning in their living trees despite the cultural adjustment.

“It makes a lot of sense to celebrate the holidays with a tree that represents renewal and giving back, and that makes our city better,” Laura Tam, a patron of the Friends of the Urban Forest Living Christmas tree program, told Salon.

Tam transitioned from a traditional real Christmas tree to a living one when she took her 8-year-old son to a place where you could cut down a tree.

“He was like, ‘wait, we are going to cut it down? We can’t do that.’ He said, ‘This is a living tree and i don’t want to kill it,’” Tam explained. “Sometimes it takes the young one among us to point something out and be in touch with the world, and that makes us really question our assumptions.”

Now, her living Christmas tree serves as a point of pride.

“It makes us feel good, which is the point of Christmas trees anyway,” she said. "[People considering the switch] can think about the meaning of the holiday and what stewarding a living being through that time represents, rather than cutting something down... even though it looks different than traditional Christmas trees, it can make you feel better about what you're doing, to give back during that season."