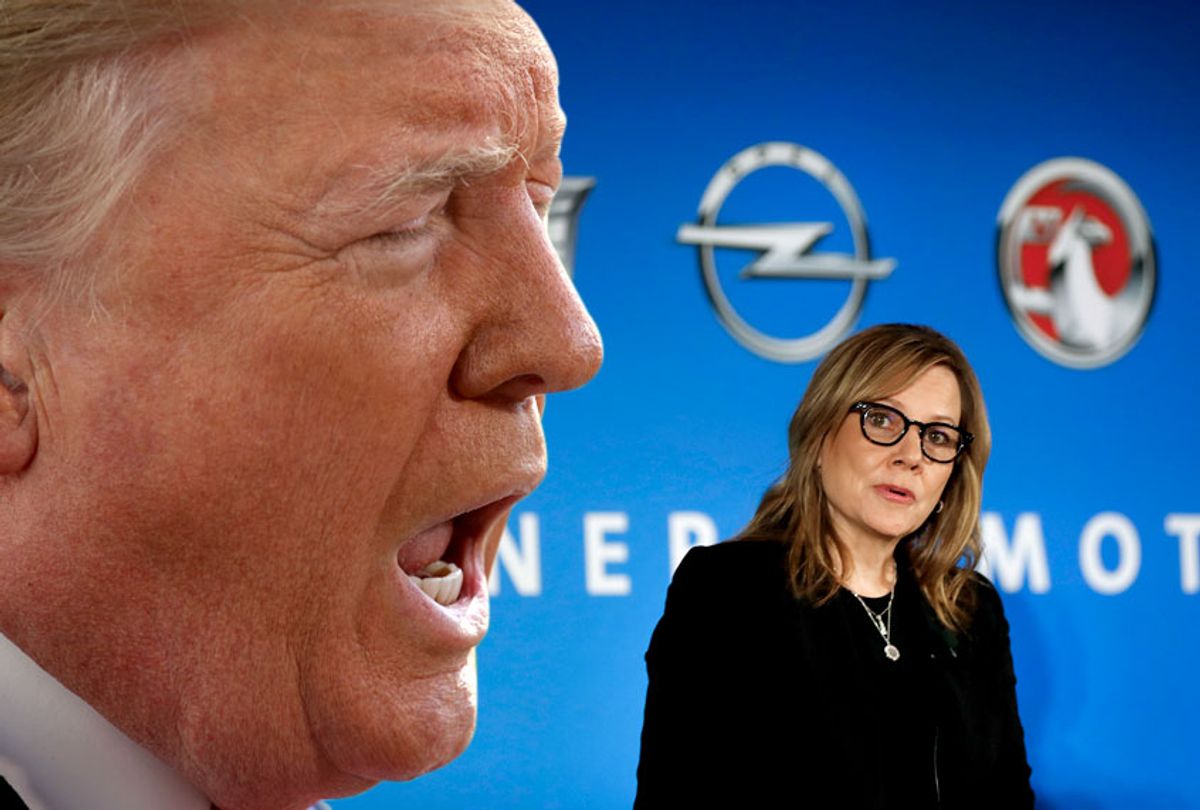 President Trump’s ironclad campaign promise that auto layoffs would cease has evaporated into hot air. At his Rust Belt rallies Trump insisted that if he won the election the auto industry would fear him so much that it would not only end its layoffs of American workers but bring back the factories it had built overseas.

Late last month, General Motors announced it would slash its salaried workers by 15 percent and terminate one in four of its executives. The “reset” will be felt well beyond the company’s plants targeted for layoffs in Lordstown, Ohio; Warren, Michigan; White Marsh, Maryland; and Detroit, as well as across the Canadian border in Oshawa, Ontario.

Earlier this year, the ink was barely dry on Trump and the GOP’s obscene $1.5 trillion corporate tax cut when Wisconsin-based motorcycle maker  Harley Davidson took its tax windfall and announced the layoff of 350 workers here in the U.S. At the same time the company raised its dividend, executed a stock buyback scheme, and went ahead with plans to build a plant in Thailand.

In 2016, Trump insisted that blue-collar Americans would no longer be the victim of this kind of unpatriotic self-dealing global capitalism. The common people had their champion.

Back on Oct. 31, 2016, at the Deltaplex Arena in Grand Rapids, Michigan, candidate Trump electrified the massive crowd with his promise to slap a 35 percent tax on any American multinational that moved manufacturing out of the U.S. and then tried to bring its products produced offshore back into the country.

“And, just the fact that we will do that, would do that, they’ll never move,” he said to a roaring crowd. “They are going to stay in Michigan. Nobody ever told them that.”

This pitch caught fire in cities, towns and villages desperate for economic opportunity that had been devastated by the free-trader policies of Presidents Clinton and Bush. These were the 70 counties that went for Obama twice, but where his “hope” grew moldy and his recovery never took root and still hasn’t.

Two years later, after all of Trump’s 2016 chest-beating, millions are still idle and the worsening opioid epidemic continues to take a deadly toll in communities where there’s nothing better to do than feed your addiction.

The ice caps continue to melt and the sea level rises. Even as the global dashboard blinks hazards ahead, dealing with it remains like dieting, something we’ll get around to eventually.

The student debt ticker just keeps ticking ever upward as the smog from the California wildfires drifts eastward. The world’s still a geopolitical mess as U.S. post-9/11 robo-military spending approaches $6 trillion and the civilian body count keeps mounting, as Trump pushes to spend even more.

His strategic vision is myopically focused on the next news cycle, grateful for visitors like Gov. Andrew Cuomo of New York, who lent the politically wounded president some much needed legitimacy by jawboning about building a new version of the Hudson River rail tunnel killed by former New Jersey Gov. Chris Christie.

In December 2018 Trump, the once fiery populist avenger, has shrunk in stature. He’s now a self-obsessed narcissist, unable to stay focused long enough to keep his "no-collusion" story straight, never mind capable of compelling American multinationals to put American workers ahead of their global pursuit of ever greater profits.

When GM CEO Mary Barra described the cost-cutting she said it was part of the company’s “transformation to be highly agile, resilient and profitable,” meant to ensure it had “the flexibility to invest in the future" and stayed “in front of changing market conditions and customer preferences” for GM’s “long-term success.”

Forget the $85 billion kicked in by U.S. and Canadian taxpayers to save GM and  the other automakers from bankruptcy in the wake of the Great Collapse. As with the predatory banks, all that government intervention was like a "band and release" conservation program.  We nursed the vultures back to health, only to release them back into the wilds of the untamed global market looking for fresh prey.

This is the same old self-dealing GM chronicled by Michael Moore in his essential documentary 1989 “Roger and Me.”

As Moore reminds us, this is the same corporation that went to Michigan Gov. Rick Snyder in 2014 to complain quietly about how Flint’s contaminated public water supply, a consequence of Snyder-inspired cost-cutting, was “causing corrosion issues for its Flint engine plant.”

“A few months after Gov. Snyder removed Flint from the clean fresh water we had been drinking for decades, the brass from General Motors went to him and complained that the Flint River water was causing their car parts to corrode when being washed on the assembly line,” recounts Moore. “The governor was appalled to hear that GM property was being damaged, so he jumped through a number of hoops and quietly spent $440,000 to hook GM back up to the Lake Huron water, while keeping the rest of Flint on the Flint River water. Which means that while the children in Flint were drinking lead-filled water, there was one — and only one — address in Flint that got clean water: the GM factory.”

What Trump and his hires have been doing since he took the oath of office is everything they can to destroy the American labor movement. He has tried to use executive orders to force unions out of the federal workplace, frozen federal workers' pay, tried to roll back Obama-era wage and hour protections, gutted worker safety and environmental regulations, and advanced a “right-to-work” agenda that makes it as hard as possible for workers to organize in their own self-interest.

Based on the midterm results it may be that a growing number of workers now have Donald Trump's number. Let’s hope their vision is even clearer for 2020.