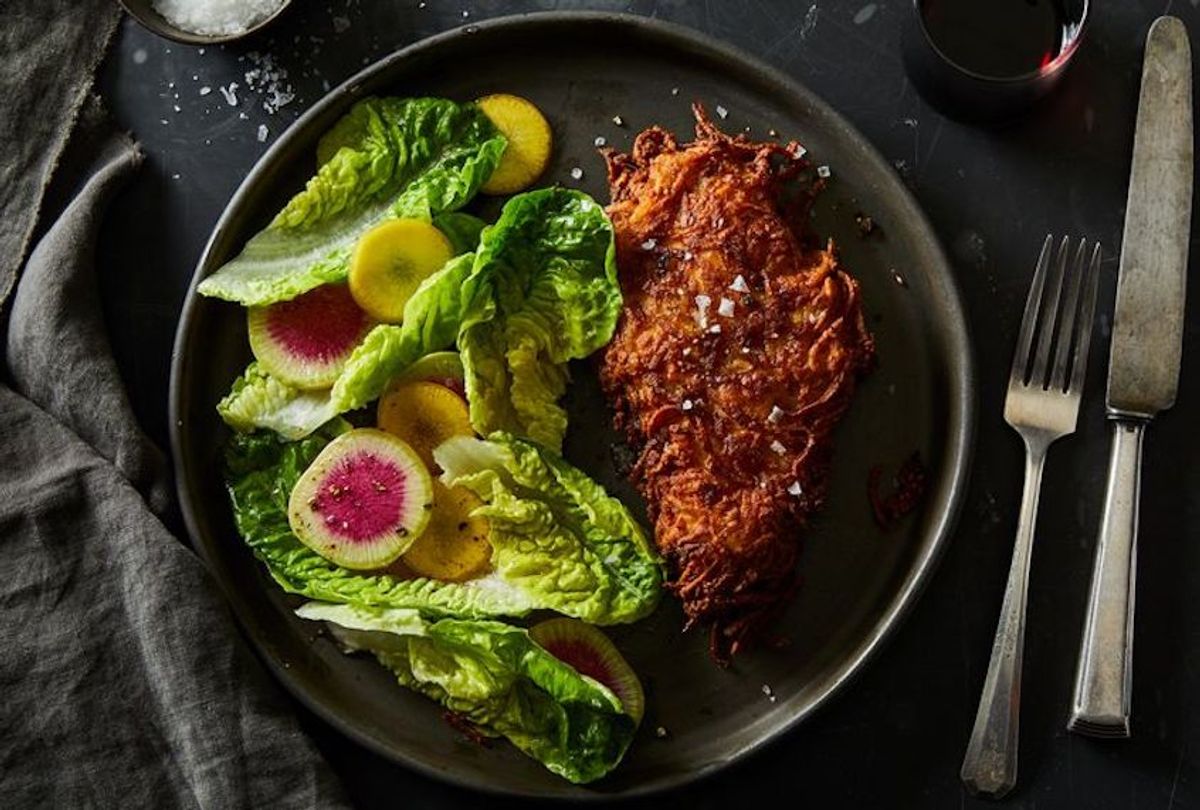 The Hanukkah story goes something like this: A tyrannical ruler was oppressing the Jews. So they rebelled, fought for their freedom, and finally won. After reclaiming a temple in Jerusalem, they lit a menorah to celebrate. There was only enough oil to burn for one day, but by some miracle, it lasted for eight.

Though the historical accuracy of this is up for debate, it’s still the tale that’s been told from generation to generation for thousands of years. It’s the reason why Hanukkah lasts for eight days. And it’s the reason why Hanukkah revolves around one type of food: fried. In places like Israel, this means lots of sufganiyot, or jelly-filled doughnuts. Meanwhile, in places like the United States, it’s all about latkes, or potato pancakes.

Not that I’m biased or anything, but my mom makes the best latkes — always served with applesauce and sour cream because no one should have to pick. She coarsely shreds the potatoes and onions, wring-dries both, binds it all together with just enough egg and flour, and salts everything like there’s no tomorrow. When they fry up in the oil, their edges turn frizzy, and their exteriors get as crunchy as a potato chip.

But our Hanukkahs weren’t about the latkes. My brother and I begged for those plenty, but we begged for something else even more: latke chicken. Or, as we would put it, “Latke chicken!!!!!!” It’s a breaded chicken cutlet, only instead of being coated in breadcrumbs, it’s coated in that same latke mixture described above.

My mom has no clue where she got this idea. She thought it might’ve come from one of her best friends, but her best friend said, Nope, not me. And from there, it’s a downright mystery. A Google search for latke chicken led me to this blog post, a dopplegänger concept, but over a decade too late to have inspired my mom. Plus, this curious chicken latke (not latke chicken, get it?), where shredded chicken is mixed into the potato pancake. And these chicken fat–fried latkes from The New York Times.

That last one got me thinking. As Melissa Clark writes, “Frying latkes in schmaltz — rendered poultry fat — is the traditional Ashkenazi method, what Central and Eastern European Jews typically did before assimilating in America.” Which is to say, chicken is special in Jewish cooking—especially during Hanukkah, when a roast chicken and just-fried latkes are like two peas in a pod.

It was really only a matter of time before someone combined the two. Whether it was my mom’s ah-ha moment on an extra-busy weeknight or an idea she snagged from somewhere (any idea where? Do share in the comments!) it’s been a Most Requested Recipe (MRR) in our family ever since.

It also just happens to be a super smart way to cook chicken breasts. Because the meat is completely insulated by the latke mixture, this prone-to-drying-out cut stays tender and juicy. And because you horizontally halve the chicken breasts — a less messy alternative to pounding — they cook evenly and quickly, about 5 minutes per side.

My mom’s method was simple: Just coat the chicken breast in the latke mixture, then fry. But, as she reminded me, there was this one snafu: the crust kept falling off. What would happen, I wondered, if I treated it even more like a breaded chicken cutlet? What if I assembled a dredging station with flour, egg, then the latke mixture?

Spoiler alert: It worked. By dipping the chicken in flour and egg, you prime the meat to really hold onto its crust. And because the flour and egg are already in the latke itself, this doesn’t weigh down the Big Little ingredient list at all.

All you need is a simple green salad* alongside and dinner’s done. Of course, it’s totally dreamy for Hanukkah — but now that I’ve finally made the recipe for myself, I have a feeling that I’ll turn to it pretty often on those other 357 days of the year. Hopefully you will, too.

*Editors' Note: The photography and video for this article were produced before the current romaine recall. If this is the first you're hearing about that, head here to learn more. While we still encourage serving Latke-Crusted Chicken with a salad, please do not use romaine for this—or any other—recipe until the Centers for Disease Control and Prevention (CDC) and U.S. Food & Drug Administration (FDA) deem romaine safe to eat again. Kale, iceberg, or endive would all be great here instead.