Behind Michael Cohen's deal: All the lies surrounding Trump start to crumble

Michael Cohen has been talking to Mueller and other prosecutors for months: This is very bad for Team Trump 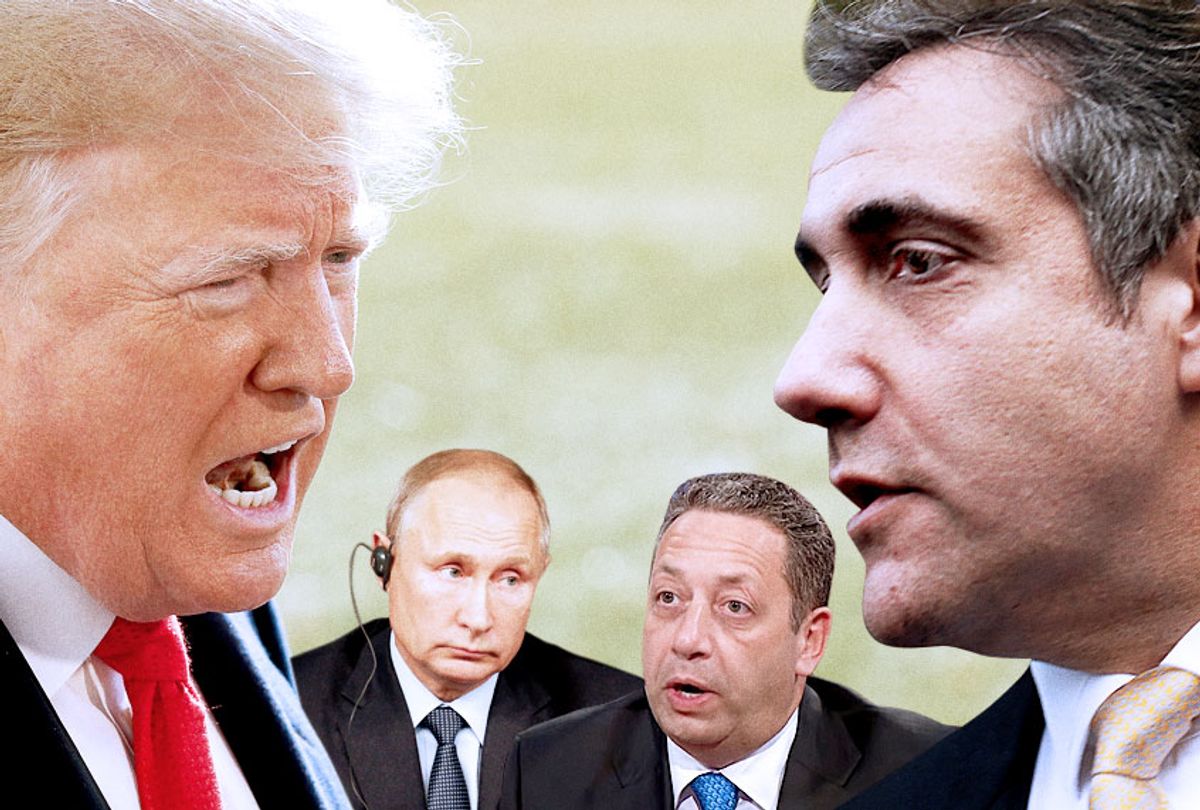 As President Trump was getting ready to take off for the annual G20 meeting in Argentina he let fly at his former lawyer and longtime Trump Organization executive Michael Cohen, calling him a liar and characterizing him as weak for cooperating with the government. He made a point of complimenting "others" for refusing to do so -- an obvious reference to his former campaign chair, Paul Manafort, and their longtime pal Roger Stone -- which was an extraordinary comment coming from the man who is formally in charge of the Department of Justice.

As Salon's Amanda Marcotte laid out in this recap of the week's events, Trump was sore about the surprise guilty plea Cohen had entered on Thursday in which he admitted to lying about his dealings with Russia on Trump's behalf during the presidential campaign. After all, Trump was jetting off for a long-anticipated reunion with Russian president Vladimir Putin in Buenos Aires and this latest news was bound to make that just a tad uncomfortable.

Trump canceled the scheduled meeting with the Russian president, citing the ongoing confrontation with Ukraine. Nobody believes that was the reason. Trump was also uncharacteristically sullen and subdued at the summit, although he and Putin did manage to squeeze in some face time after all. (Nobody knows what they spoke of, as usual, although it's not hard to guess.) He signed the new NAFTA deal and had a meeting with Chinese President Xi Jinping which he is boasting resulted in the greatest trade deal in history but which experts say is really just an agreement to keep talking, aside from a pledge to control the export of fentanyl. Like the North Korean "deal," it's a lot of talk and flattery to make Trump feel like a real president.

It was obvious Trump's heart wasn't in it. He was still obsessing over the Cohen plea on Saturday morning:

He ended up canceling his planned press conference, for which he should be grateful. Those never end well for him. It would almost certainly have featured many questions about the current state of the investigation, including the very interesting memorandum filed by Michael Cohen's attorneys on Friday night in anticipation of Cohen's sentencing this week. In what is perhaps the first of its kind in the whole Russia scandal, it appears to have been done by competent defense lawyers.

First of all, it explains why Cohen didn't seek a cooperation agreement of the kind taken by others like Rick Gates, Michael Flynn, George Papadopoulos and the aborted Manafort deal. It turns out that he has been talking to Mueller's office since before he pled guilty in the hush money case and has done so regularly ever since. Not only that, but he's continuing to cooperate with the U.S. attorney of the Southern District of New York as well as the New York state attorney general in an investigation into the Trump Foundation and something to do with the New York tax authorities. Cohen has been busy.

He didn't ask for a formal cooperation agreement because his lawyers apparently convinced him that the smarter move was to cooperate willingly and preemptively so as to begin his sentence as soon as possible. The memorandum suggests that prosecutors have been convinced that he will continue to cooperate and that he plans to do so. Whether that's true or not, now that he's pled guilty to lying, most observers feel he's "locked in" on the Russia conspiracy side of the Mueller investigation. What Cohen lied about is substantial, despite Trump's characterization of it as "lightly looking at doing a building in Russia" while he was talking up the Russian president on the campaign trail and the Russian government was sabotaging his opponent on his behalf.

Cohen's guilty plea for to lying to Congress has also opened up a huge can of worms for a whole lot of people who came before congressional committees.  Cohen admits that he “remained in close and regular contact with White House-based staff and legal counsel to Client-1 [Donald Trump]” in advance of giving testimony that he now admits was false. There's a lot of evidence that others did the same thing. In fact,  the Republican chair of the Senate Select Committee on Intelligence, Richard Burr of North Carolina, said the committee has referred "a lot" of them to the Justice Department for doing so. It's an open question as to whether or not those witnesses conferred with the president's staff and legal counsel before they testified.

But you can't solely blame White House staff if a lot of people lied to the committees -- particularly the House Intelligence Committee, whose outgoing GOP majority acted as agents of the president and helped engineer the cover-up. As Salon's Sophia Tesfaye pointed out this weekend, the unethical behavior of the GOP leadership, epitomized by House Intelligence chair Devin Nunes of California, pretty much told anyone who testified that they could lie with impunity. Indeed, the partisan "report" Nunes' committee issued exonerating the president exonerated those witnesses as well, since none were referred to the Justice Department.

That doesn't mean they are in the clear. The incoming Democratic chairs of both the House Intelligence Committee and the House Judiciary Committee -- Adam Schiff of California and Jerry Nadler of New York, respectively -- made it clear on the Sunday morning shows that they plan to release all the testimony to the special counsel's office, which the Republicans have refused to do. In fact, Nunes and his fellow Trump henchmen's willingness to scheme with the White House on behalf of the president may have created a sense of false security for prominent witnesses such as Donald Trump Jr., Jared Kushner and Eric Prince, all of whom could soon find themselves in the kind of hot water Cohen just got himself out of.

Both chairmen had ominous words for Trump and his circle. Nadler pointed out that Trump's Moscow Trump Tower deal gave the Kremlin "leverage" over the president and wondered whether Putin was still using it. Schiff said Trump and his business were obviously "compromised." Many more questions still remain, of course.

Keep in mind that a major partner in that Trump Tower deal that everyone has been lying about was a shadowy character named Felix Sater, who has lurked on the edge of Trump's career for decades. This is what Sater told Michael Cohen when they were putting together the deal:

I arranged for Ivanka to sit in Putin’s private chair at his desk and office in the Kremlin. I will get Putin on this program and we will get Donald elected. I know how to play it and we will get this done. Buddy, our boy can become president of the USA and we can engineer it. I will get all of Putin’s team to buy in on this.

Perhaps this was just "salesmanship," as Michael Cohen originally claimed. But no one has ever adequately explained the line of thinking that links a Trump Tower deal in Moscow to getting Trump elected president. I'd guess that Schiff and Nadler will be calling Felix Sater in to fill in the blanks.