Michelle Obama is right about leaning in — and about marriage 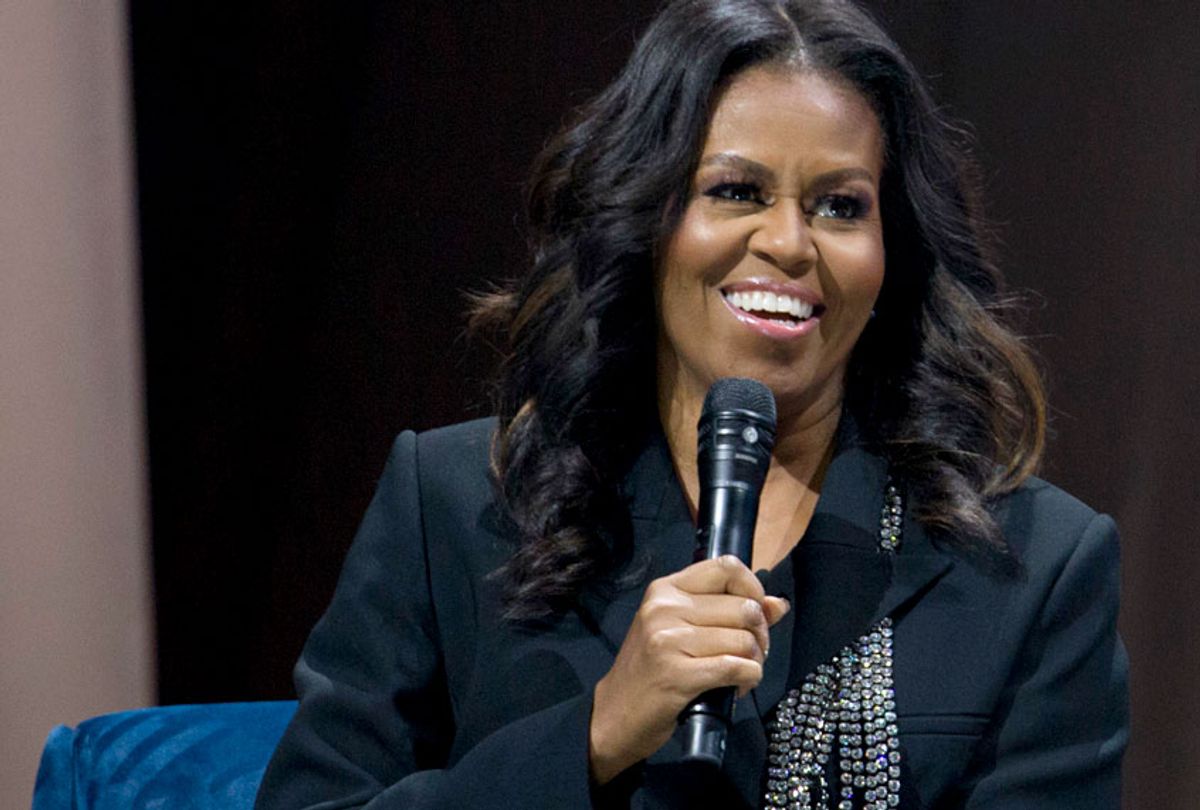 I think I can speak on behalf of a great number of American women here when I say this: Michelle Obama, you want to get wine drunk together some time? Share an order of fries? Just have a big old bitch sesh about the patriarchy and how J. Crew has really gone downhill lately?

The former first lady has been doing the rounds of late promoting her new memoir "Becoming," packing in Ariana Grande-level stadium crowds, while also making stops at small girls' clubs along the way. At an event at the Barclays Center in Brooklyn this past weekend, Mrs. Obama was dealing some straight truths when she reportedly told the crowd, "Marriage still ain’t equal, y’all. It ain’t equal. I tell women that whole 'you can have it all' — mmm, nope, not at the same time, that’s a lie. It’s not always enough to lean in because that s**t doesn’t work." When the crowd went appropriately bonkers, she quickly apologized, adding, "I thought we were at home. I was getting real comfortable up in here. Alright, I’m back now. Sometimes that stuff doesn’t work." Damn. The new, beyond effs to give Michelle is especially glorious.

Since its release last month, "Becoming" has been garnering praise for its candid revelations about the author's life in the public arena and behind closed doors. In it, Obama chronicles her "lonely, painful, and demoralizing" experience of a miscarriage "which left me physically uncomfortable and cratered any optimism we felt," as well her subsequent challenges with IVF to conceive daughters Sasha and Malia. "I felt like I failed because I didn’t know how common miscarriages were because we don’t talk about them,” she told "Good Morning America" last month. ″We sit in our own pain, thinking that somehow we’re broken.”

She also pulled no punches on the birther lies that helped pave a path for a Queens real estate huckster to ascend to the White House. "Donald Trump, with his loud and reckless innuendos, was putting my family’s safety at risk," she wrote. "And for this, I’d never forgive him.”

But where Obama has been striking a particularly timely chord of late has been in her open discussion of the warts and all institution of marriage. In an interview with Oprah Winfrey for Elle, she talked about why she and her husband Barack sought out couples counseling, saying, "What clicked in me was that I need support and I need some from him. But I needed to figure out how to build my life in a way that works for me." And she gave reassurance to other couples on "Good Morning America," observing, "I know too many young couples who struggle and think that somehow something is wrong with them. . . .We work on our marriage and we get help with our marriage when we need it."

At the Barclays event, though, she got even more real, saying, that she and Barack went into counseling because, "duh, marriage is hard, you know. It is hard." Obama went on to say, "I love my husband, and we have a great marriage, and we’ve had a great marriage, but marriage is hard work. Marriage is a lot of work, and it should be. It’s two independent individuals who are trying to come together to build a life forever." Then parenting throws another wrench in the machine, because as Obama put it, "kids are an interrupter; they mess it all up. Barack and I say that’s why they make them cute, because if they weren’t cute, you’d just leave them in a basket." It's like she's met my kids.

Obama's vulnerable bluntness feels especially welcome right now. Eight years ago, when Laura Bush published her memoir "Spoken from the Heart," the New York Times called it "a thoroughly conventional autobiography by a politician’s wife — a rote recitation of travel, public appearances and meetings with foreign dignitaries that sheds not the faintest new light on the presidency of the author’s husband." But eight years feels like a lifetime ago now — a time pre-#MeToo and pre-Leaning In.

Sheryl Sandberg's viral 2010 TED Talk and 2013 book acknowledged women's harder choices "between professional success and personal fulfillment." And encouraging women to "sit at the table," to get over whatever imposter syndrome they may harbor and cultivate leadership is sound advice. I've taken it to heart by way of a female friend who had a surprise career breakthrough after slogging away for decades, who advised me a few years ago, "Ask for what they'd give a white man." Simplistic, yes, but effective when you find yourself afraid to quote a perfectly fair work rate.

Sandberg's reminder that we need to value ourselves has had a legitimate place in moving the conversation about women in the workforce forward, as is her imperative that men must achieve equity on the home front as well. But "leaning in" has also over time become a shorthand, a modern but not very different version of the old "having it all." Per usual, it's also a model that assumes much of the fixing of things will fall to women.

And this is where I imagine that you, I, and Michelle Obama are just good and tired and ready to wave the bartender over with a meaningful nod. The bookshelves are groaning with advice for women on achieving life/work balance, on getting that corner office while simultaneously kicking parenting butt. But where maybe before November 8, 2016, we had the luxury of leaning in and all the ease and languor that implies, many of us have since transitioned to a different mode — what author Gemma Hartley described in her recent book as "Fed Up."

Leaning in, for all its 2010 relevance, still puts the onus of asking and changing upon us. Being fed up implies an evolved sense of "why doesn't someone else figure it out for once?" What Hartley correctly identifies as "emotional labor" takes into account that gender true equity, and a system that is nourishing and healthy for men and women alike, means giving value and attention to not just to our C-suite ambitions but the drudgery of picking up socks and making dentist appointments. It means, in the domestic sphere of straight relationships, women legitimately moving from being managers to partners.

Yesterday I ran into a friend, massively pregnant and wild with fury, who had issued herself a time out when her toddler wouldn't stop throwing her shoes in the toilet. She said her husband had been stunned when she'd told him she was leaving and he was on deck for a few hours. He asked her what to do, and she advised him to take the the shoes out of the toilet. "I shouldn't have to say that," she'd told me. No, she shouldn't.