Why are conservatives so furious about the links between George H.W. Bush and Donald Trump?

After Bush's death, I noted that he was closer to Trump than some believe. This enraged Trump voters: But why? 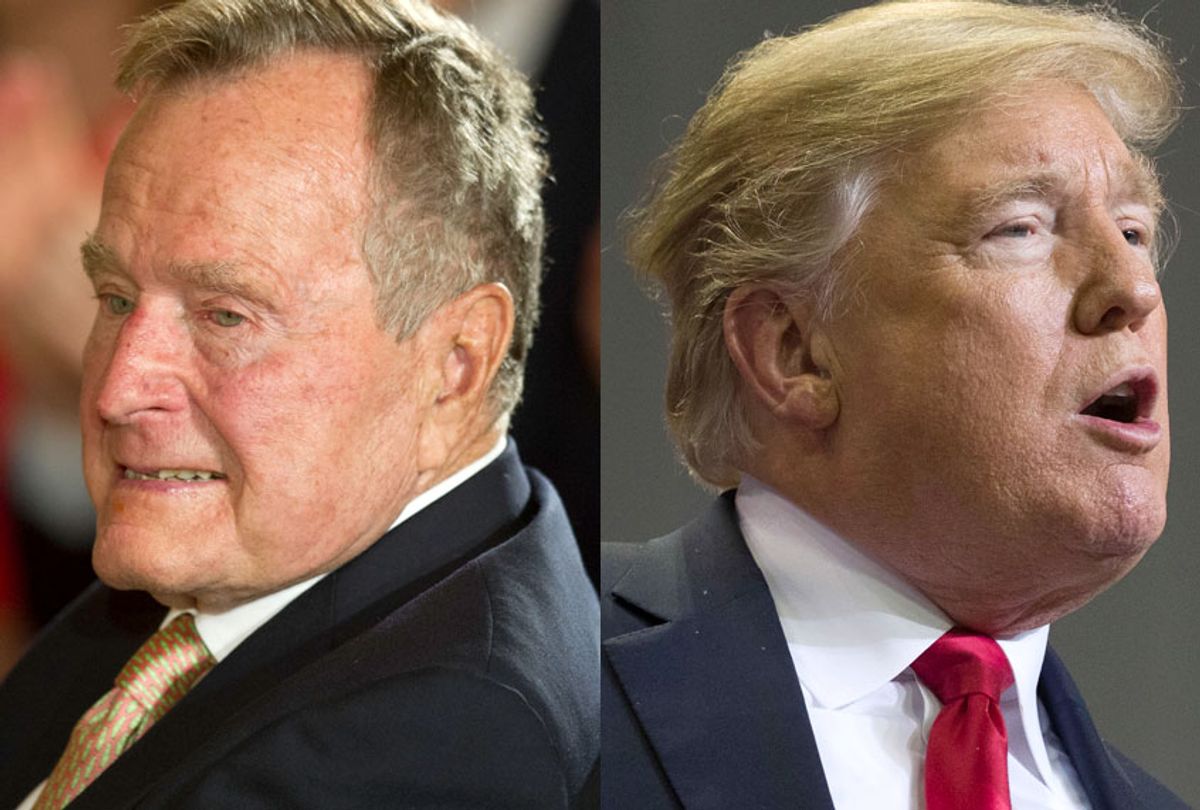 As soon as I saw that former President George H.W. Bush had passed away on Saturday morning, I knew one thing for certain: Many liberal and centrist critics of Donald Trump would be eager to use Bush's death as an opportunity to shame Trump. The urge would be to establish Bush as a dignified statesman, to contrast him with the leering, smirking troll who currently occupies the White House.

It's an understandable urge. Nostalgia is a powerful weapon, and the argument that our current situation is the result of clean break from a more noble past is a powerful one. But it's also a misleading claim. Trump is the direct result of decades of Republican politicians embracing racial demagoguery and culture war hysterics to create political support that they'd never get by running on an agenda of tax breaks for the rich and deregulation. It's a matter of historical fact that Bush played a major role in this.

So I took to Twitter to remind my largely liberal following of this, pointing out some historical facts about Bush: He had appointed an accused sexual predator to the Supreme Court, that he had switched from pro-choice to anti-choice out of political expedience, and he had hired Roger Ailes to help run a political campaign that relied heavily on race-baiting. The point, I hoped, was clear: These are all literally things Trump also did. Bush helped lay the groundwork for Trump's rise.

Within a few hours, I was deluged on Twitter by people attacking me, largely with gendered insults like "cunt" and "twat," claims that women shouldn't be allowed to vote and insults about my looks. I also got threats, including one emailed to me that called me a "Toxic Marxist" and read, "We as a nation are approaching the point where our war of words is quickly becoming actual shooting war."

The source of the dogpile was easy enough to figure out: Breitbart had sent its vituperative audience to harass me,  falsely implying that I had insulted Bush by putting "F**k Him" in the headline.

To be clear, I did not use any invective against Bush or issue any insults, nor did I wish to. I certainly did not curse like that in my tweets. I have no ill will towards Bush as a person. Nor were my tweets really aimed at conservatives at all. They were meant to share historical facts with liberals to dissuade them from using false narratives about Bush in an effort to shame Trump.

This is hardly the first time right-wing media has turned a firehose of harassment against me, and I doubt it will be the last. A great deal of ultra-conservative propaganda is focused on holding up journalists who are considered "liberal" and inviting their audiences to engage in a two-minute hate.

If you're a journalist or pundit who rejects authoritarianism, especially if you're female or a person of color, your time in the barrel is coming. It's not fun, but I know from experience that the mob will move on when Breitbart dangles the next hate object in front of them. It's an intimidation tactic to silence the free press, and the best thing to do is not to be intimidated.

Still, I want to highlight what happened because the incident distills the way right-wing media has trained its audiences to be hateful and reactive, and to eschew anything resembling engagement or critical thinking. The folks coming at me on Twitter had plenty of insults, but showed no evidence that they had actually listened to my points before lashing out. They had been instructed to believe I was a bad person saying bad things, and they followed orders blindly, spewing insults and threats, without bothering to engage with my points.

If they had actually bothered to understand what I wrote, I wonder if they would have been so mad. After all, my argument was that Bush was more like Trump than a lot of people think. Now, I personally think that's a bad thing, but why should Breitbart readers? They love Trump. They think Trump is a good person and that he is doing good things for the country. Presumably, they ought to believe it's a compliment to say that someone is like Trump.

Everything I recounted about Bush, from the appointment of Clarence Thomas to the "Willie Horton" ad, were things Trump supporters like. It's genuinely weird to say, "This person did a thing you like," and have people lash out at you, spewing bile and threats. Their reaction was something like a Democratic voter screaming invective at someone who said that Hillary Clinton shares a lot of the same views that Ted Kennedy once held.

It's tempting to suggest this lashing out is because even Trump supporters know, on some level, that Trump is a vile person and therefore perceive it as an insult to say that anyone has anything in common with Trump. But honestly, I doubt most of them had actually read the tweets they were told were so evil, much less understood that the point was to draw a comparison between Trump and Bush. They just knew I was a liberal and a woman and that Breitbart told them I was bad. That was more than enough.

There's a tendency in much of the mainstream media these days to hand-wring about "both sides" engaging in "tribalism," as if liberals and conservatives have both abandoned policy and ideological discourse and instead have embraced a politics of mindless hate towards the other side. But this incident is yet another reminder how false that narrative is.

The reality is, as the last election showed, the left does engage in ideas and philosophical debate about ideology. While the discourse can get heated at times, at the end of the day, the "liberal" identity is still focused on a set of beliefs about how to shape government and society to further goals like equality, justice and fairness. But the right is increasingly organized around a blind, irrational hatred of liberals, one that has little to do with their ideas. On the contrary, sites like Breitbart are actively discouraging engagement with ideas and instead simply defining conservatism as a loathing of anything or anyone deemed "liberal."