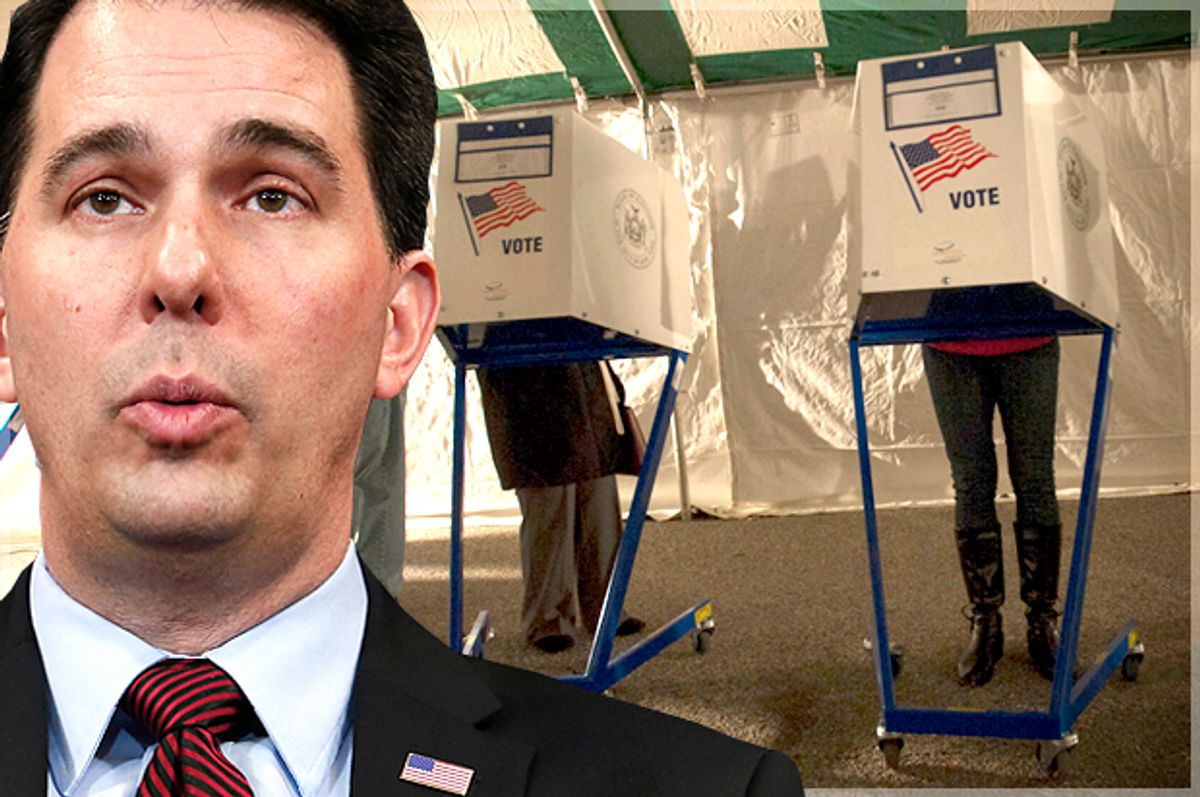 Wisconsin's Republican-controlled legislature has apparently decided to kill democracy in their own state.

Political observers can already see how protests are erupting throughout the state in response to how the Republican legislature voted to significantly reduce the powers of Gov.-elect Tony Evers and Attorney General-elect Josh Kaul before they can take office, according to CNN. Wisconsin Republicans are hardly innovators here — North Carolina Republicans passed a similar law after a Democrat won the governor's mansion in their state in 2016, and Michigan Republicans are aiming to do something similar right now — but the situation is particularly galling in Wisconsin due to its reputation as a bastion of integrity when it comes to the democratic process. In order to better understand both the radical nature of the legislature's actions and what it will mean for the future of democracy in Wisconsin, Salon spoke by email with Michael Wagner, an associate professor at the University of Wisconsin-Madison who specializes in "research, teaching, and service are animated by the question, 'how well does democracy work?'"

Is there any precedent in Wisconsin's history for the legislature to disempower the governor and other top state officials in this fashion?

I am not aware of such a precedent. When Gov. Walker replaced outgoing Gov. Doyle, Doyle halted his signature high-speed rail project at Walker’s request, as Walker had been against it. What is happening now in Wisconsin is a subversion of democracy – Wisconsin Republican lawmakers are changing the job descriptions of the governor and attorney general between Election Day and Inauguration Day simply because their side lost. This is a textbook example of how democracies die. That is, when norms about the peaceful transfer of power are violated, we are in trouble.

Is there anything that Wisconsin's incoming governor and attorney general can do in response?

The incoming attorney general, Josh Kaul, has said that there will almost certainly be litigation in response to the changes – I have seen some folks representing the American Constitution Society arguing that the stripping of powers from the attorney general (and then giving them to the legislature) violates the state’s constitution. The Wisconsin governor also has a very powerful veto pen. The governor can literally cross out words in a veto to create new meanings in legislation. Since Tony Evers won’t take office in time to veto this legislation, which he surely would if he had the chance, he could choose to be punitive with Wisconsin Republicans for future legislation they pass, once he takes office. In other words, the contentious partisan politics in Wisconsin is likely to get worse.

What will the long-term ramifications be for the Democratic Party, the Republican Party and the government itself in Wisconsin?

Governor Walker took office and immediately pursued legislation curtailing the power of labor unions. He had not campaigned on it. It was so controversial it filled the capitol with protestors for weeks. He leaves office with the capitol filled with protestors once again as he is asked to sign legislation that he and his fellow Republicans did not campaign on during the election season. The Democratic Party spent a lot of 2018 party building and door-knocking. They are trying to ensure high voter turnout, like they got in November, for the future. Republicans are seeking to limit early voting and even tried to change the date for a presidential primary to make it more likely, according to the state senate’s majority leader, for a conservative state supreme court candidate to win. It would not be surprising to see acrimonious, hardball politics get worse. A state that once enjoyed a national reputation for good governance is now earning new reputation for the subversion of democratic practices. The long term ramifications are likely to be a further fracturing of trust between Republicans and Democrats in government and in the populace. People in Wisconsin are literally stopping talking with friends because of state politics.

Similarly, which Democratic policies are most likely to be hamstrung or outright thwarted because of their success?

Governor-elect Evers and Attorney General-elect Kaul’s promise to extricate Wisconsin from the Affordable Care Act lawsuit appears to have received a death blow. Evers’ desire to increase K-12 spending and the state’s investment in the University of Wisconsin System will face an uphill battle. Running the state’s economic development board is also constrained under the new provisions. Divided government, once Evers takes office, could severely hamstring both Democrats and Republicans unless the two sides find a way to trust each other and work together – something that does not appear likely at present. One place where there might be some agreement – an increase in the gas tax to fund road repair.

Could the precedent established here ultimately hurt Republicans in the future?

It’s possible. If the federal redistricting lawsuit ends up going the Democrats way, some of the country’s most severely gerrymandered state legislative districts will be redrawn in ways that could result in Democrats winning more seats in the state government. If that happens, Democrats could well choose to participate in severe partisan payback. Moreover, recent research shows that independents get motivated to vote when they see lawmakers subverting democratic practices. So, beyond the district lines battle, voters themselves – if they hold onto the motivation they currently feel – could hurt the GOP at the ballot box in future elections.