Deputy demoted after he "discredited the agency, the country and himself" during a meeting with the vice president 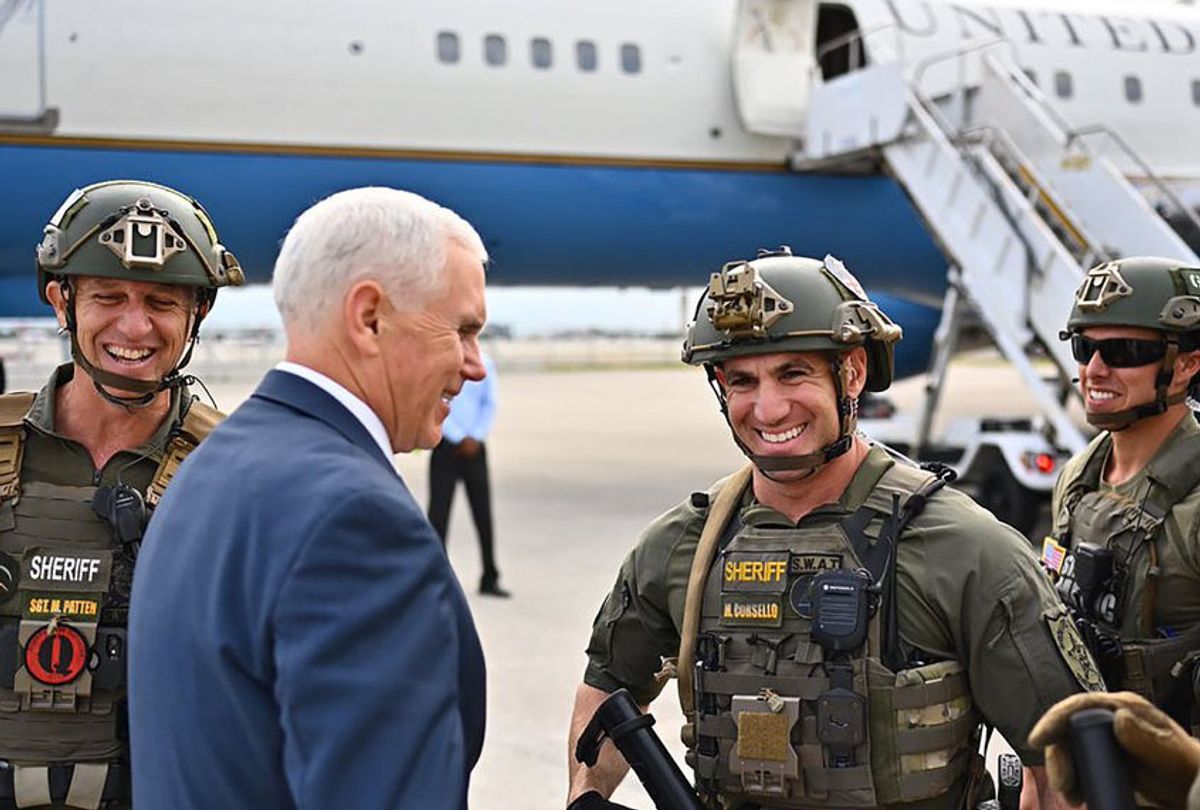 A SWAT member who was photographed brandishing a QAnon conspiracy-theory patch while meeting Vice President Mike Pence has been punished for subscribing to the discredited right-wing hoax.

Sergeant Matt Patten was revealed to be wearing a patch on his official uniform with a QAnon logo and the slogan "Question the Narrative" while meeting the vice president at Fort Lauderdale-Hollywood International Airport last month. The vice president's staff took photos of the meet-and-greet and posted them on Twitter, from the official account, before deleting he tweet featuring Patten's QAnon patch after it was pointed out by Jared Holt of RightWingWatch.

The Broward Sheriff's Office, where Patten was employed as a SWAT member, said Patten's apparent belief in the "controversial" conspiracy theory and his wearing the patch while meeting Pence made their office seem politically "biased," the Miami New Times reported. The Sheriff's office also pointed out how Patten's sartorial decision was noticed by national media outlets and had embarrassed their office at a time when it has tried to recover from criticisms of its handling of the Parkland school shooting.

“Sergeant Patten’s actions of displaying unity with a controversial group not in alignment with the core values of the law enforcement and the Broward Sheriff’s Office discredited the agency, the county and himself,” a sheriff’s office supervisor wrote in a disciplinary report.

"This resulted in negative ramifications on a national platform as a controversy for the Broward Sheriff's Office, the County, the SWAT team, and Sergeant Patten. The controversy also caused the V.P.O.T.U.S. Office Website to delete the image," the reprimand added.

The QAnon conspiracy theories were a series of hoaxes promoted by right-wingers on YouTube and websites like 4chan and 8chan, according to NBC News. Focusing on posts put up by an anonymous individual who goes by the moniker 'Q,' QAnon argues that President Donald Trump is actually working to destroy sinister schemes being cooked up by everyone from Hillary Clinton and other Democratic Party insiders to members of the Hollywood elite. The general thrust of QAnon is its insistence that Trump is a hero for working Americans and that the Democratic Party and other liberals are involved in sinister and even satanic schemes. As The Guardian explained in July:

It’s hard to say. The conspiracy theory is generally pro-Trump and anti-“deep state”, but it is not exactly coherent, and – like many conspiracy theories – is flexible enough to adapt to any new developments that might disprove it.

New York magazine and the Daily Beast have written articles explaining more of the basic beliefs of QAnon, but chances are that the more you read about it, the more confused you will be. Imagine a volatile mix of Pizzagate, InfoWars and the Satanic Panic of the 1980s, multiplied by the power of the internet and with an extra boost from a handful of conservative celebrities.