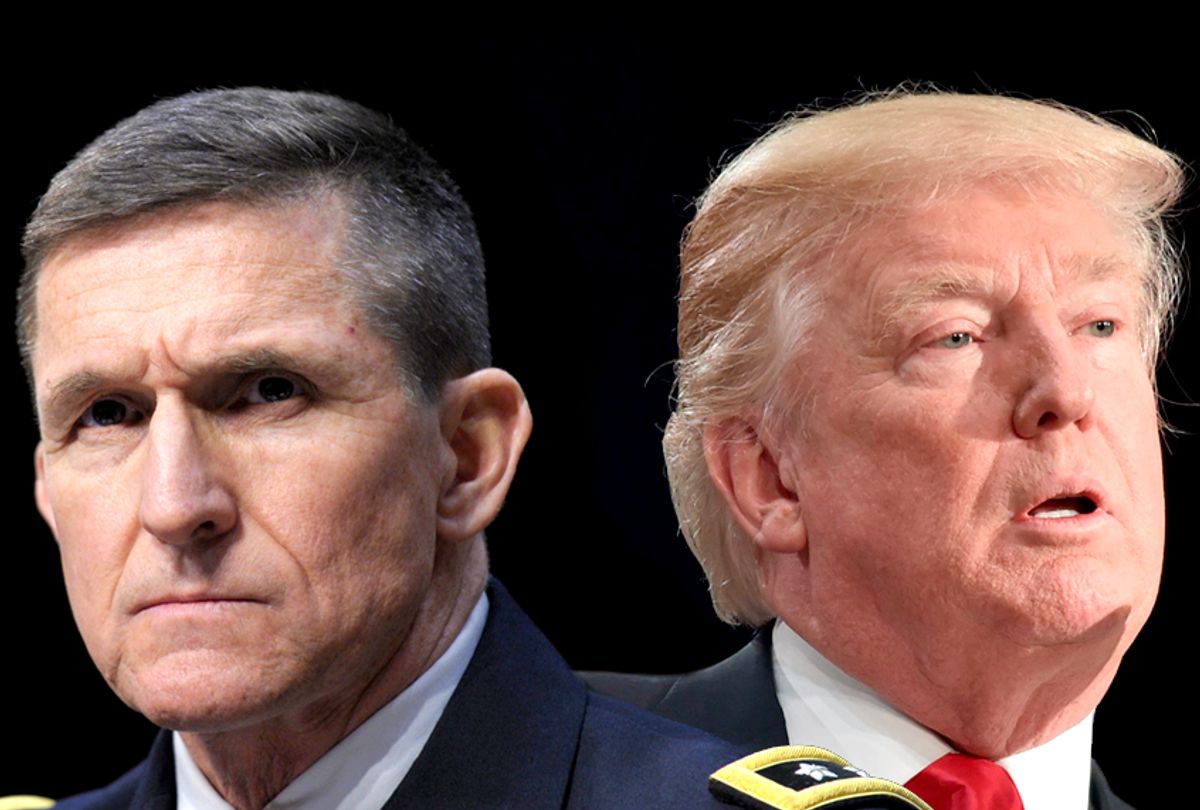 Of all the cooperators in Robert Mueller's investigation, the one who has been quietest through the whole thing is former national security adviser Michael Flynn. It's rather unexpected considering his rash statements during the campaign, tweeting conspiracy theories and leading chants of "Lock her up!" at the GOP convention. Everything pointed to him being more like Roger Stone or Jerome Corsi than the disciplined military officer he presumably was before he got bitten by the right-wing activist bug.

Not that Flynn has had an awakening on that count. His one foray back into the political scene was to campaign last March for a Republican named Omar Navarro, the longshot opponent to Rep. Maxine Waters, D-Calif. Navarro was also endorsed by former Phoenix sheriff Joe Arpaio and Roger Stone. So Flynn is still a member of the club, but has at least followed his lawyer's advice to keep a low public profile while he awaited sentencing for lying to the FBI about talking to the Russian ambassador during the presidential transition period.

That was smart and it paid off. The special counsel's office finally submitted its sentencing memorandum to the court late yesterday and it turns out that while Flynn may not have been saying much to the public he was talking up a storm to prosecutors. The memorandum says he's met with them 19 times, which most experts said was the number of meetings you'd typically only hold if you were preparing for a trial. It's a lot.

Apparently, Flynn impressed Mueller's office with the depth and breadth of his cooperation, particularly since he sang very early in the process and the information he provided was vital in convincing others to come clean as well.  Mueller's team is so happy with Flynn's testimony that they are recommending he serve no jail time.

This is unlikely to be such a happy day for President Trump, however. One of the main reasons the special counsel asked for the most lenient sentence possible is because Flynn offered prosecutors "first hand" knowledge of events.  According to former federal prosecutor Chuck Rosenberg on  MSNBC, that means he "was in the room where it happened" (quoting "Hamilton"). Since Flynn was traveling with Donald Trump during the campaign and worked closely with him during the transition on issues of interest to the Mueller team, it stands to reason that Trump is likely to be one of the people who was also in that room. Rosenberg pointed out that the recommendation says Flynn provided "substantial" cooperation, a term of art among prosecutors used when a witness has provided extraordinarily useful information.

Unfortunately, and much to everyone's disappointment, there isn't a lot to go on to determine what Flynn actually told them. The sentencing document is more redacted than not, although it does provide a few tantalizing clues. First, it appears that aside from cooperating in the Russia investigation as we understand it, Flynn also gave evidence in an unknown criminal investigation, as well and a third investigation that as completely redacted so we literally have no clue what it might be. It could be criminal, civil or counter-espionage; there's no telling. It's totally blacked out. Whatever these investigations may be, they seem to be important enough that Mueller continues to pursue them.

National security reporter Marcy Wheeler speculates that the criminal case may be related to Flynn's business connections to Turkey and that the third, completely redacted case might be a counter-espionage investigation. Recall that Flynn was also involved in a scheme to sell nuclear power plants to Saudi Arabia and was implicated in a weird plot with a now-deceased right-wing activist named Peter Smith to find Hillary Clinton's emails. It's also possible these investigations could be related to matters we haven't yet heard about.

Most observers thought that Flynn being sentenced would signal that the Russia probe is coming to an end. His date has been postponed numerous times, so it seemed logical to assume that they were holding back until they were finished. But it now appears prosecutors believe he will be cooperative in the future, even without a jail sentence hanging over his head, which probably means Flynn has testified before a grand jury and they have his testimony locked in. They may have come to appreciate his candor, but I doubt any of this is based on trust. Flynn is smart enough to listen to his lawyer but he's not smart enough to avoid Donald Trump. So it's doubtful Mueller is letting him off the hook without guarantees of his future cooperation.

To me, it's been obvious from the start that Flynn's behavior during the presidential transition was an act of betrayal. Back in 2017, I wrote for Salon:

Michael Flynn has admitted to calling up Russian ambassador Sergey Kislyak -- at the behest of other members of the incoming administration and likely the president himself -- and telling him not to worry about any U.S. retaliation against Russia for its election meddling, because when the Trump team took office they'd make it all go away. He might as well have said, "Tell Vlad thanks for the help. We've got his back."

Trump himself tweeted the next day:

The sanctions imposed by the Obama administration were not meant to delegitimize the election or threaten Trump. They were meant to punish the Russian government for its interference in the election. And the incoming Trump administration -- on whose behalf we have later learned the Russians were explicitly acting -- effectively told the Russian government that it needn't worry, those punishments would be reversed as soon as the new boss assumed office. That is and always was outrageous.

Now that we know how obsessed the Russian government was with lifting existing sanctions, that history takes on an even more ominous light. There appears to have been a private understanding between Trump and the Russian government on this matter. If Flynn has first-hand knowledge of that understanding --- if he was  "in the room where it happened" --  it could be one piece of this puzzle that will be very damaging to Donald Trump.