Will Trump ever turn on Saudi Arabia? Pressure mounts for U.S. to prosecute Khashoggi’s killers

How to bust the Trump cover-up 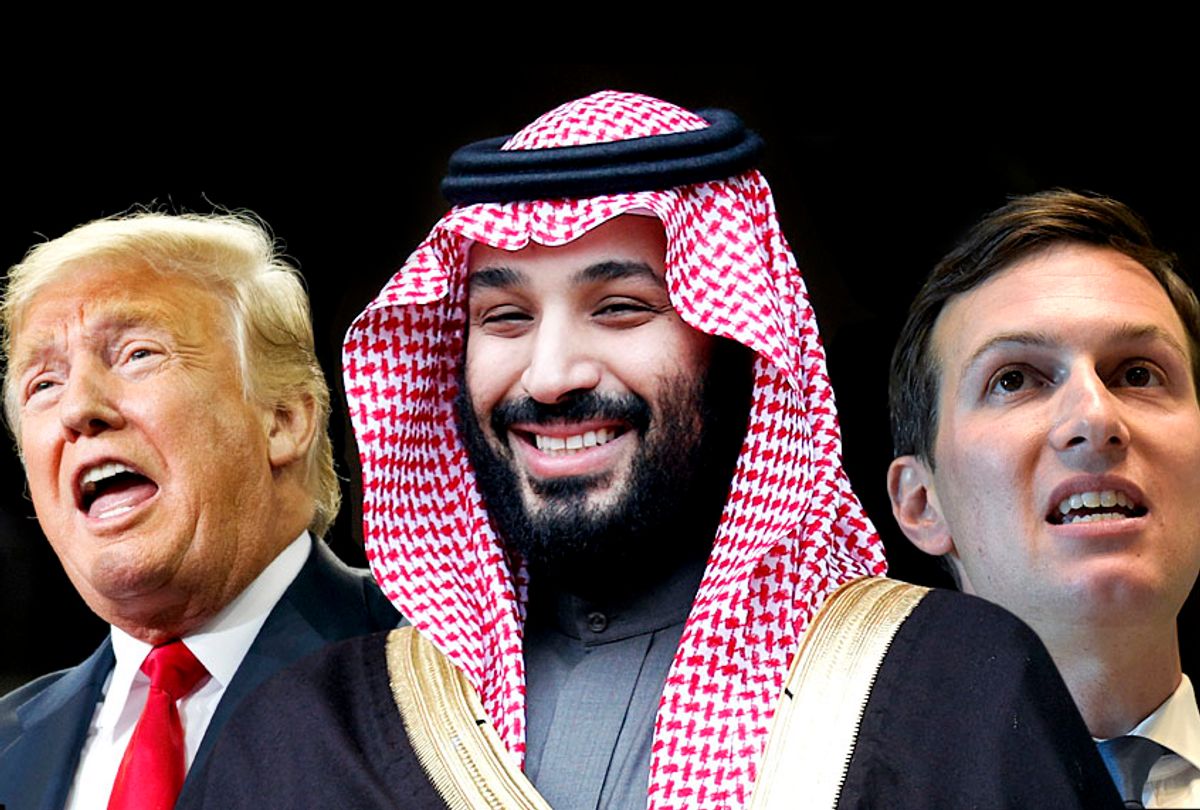 The evidence against the perpetrators of Jamal Khashoggi’s killers is strong and getting stronger.

“If the crown prince went in front of a jury he would be convicted in 30 minutes,” Sen. Bob Corker, chair of the Senate Foreign Relations Committee, told reporters after hearing CIA director Gina Haspel briefed a group of senators Tuesday on the killing of the Washington Post journalist.

According to a memo leaked to the Wall Street Journallast week, U.S. intelligence has evidence of 11 exchanges between Crown Prince Mohammed bin Salman and his social media propagandist Saud al-Qahtani. The communications “roughly coincided with the hit team’s advance into the Saudi Consulate in Istanbul, where Mr. Khashoggi was murdered,” according to the New York Times.

Qahtani, with 1.36 million followers of his Saudq1978 Twitter feed, served as an ideological enforcer of MBS’s message in Middle Eastern media and was harshly critical of Khashoggi. The CIA believes Qahtani supervised the 15-member hit team drawn from Saudi Arabia’s General Intelligence Presidency and other security forces.

The Saudi public prosecutor has arrested 18 Saudis in connection with Khashoggi’s death—but Qahtani is not one of them. A prosecutor in Argentina is looking into the case as a possible war crime. Yet, aside from the CIA, the Trump administration insists the intellectual author of the crime cannot be identified.

But if the U.S. government does not want MBS and al-Qahtani to get away with the murder of a U.S. resident, they do not need to wait for the Saudis to act. And they do not need a “smoking gun.” They only need “probable cause.”

Former prosecutors interviewed by the Deep State news blog say the U.S. Justice Department could investigate Khashoggi’s murder — and, if the evidence is sufficient, issue indictments in his unlawful death.

Section 956 of chapter 45 of Title 18 of the United States Code makes it a crime to conspire “to kill, kidnap, maim, or injure persons or damage property in a foreign country.” According to the law, the United States has jurisdiction “regardless of where such other person or persons are located.”

Actions to further the crime may well have taken place in the United States.

“At least three friends of Khashoggi told Reuters that in the months after the journalist moved to Washington a year ago he received multiple phone calls from MbS’s right-hand man urging him to return to Saudi Arabia,” Reuters reported Wednesday.

Back in October, the Post’s Shane Harris reported that U.S. intelligence sources had intercepted the conversations of Saudi officials discussing a plan to lure Khashoggi back to Saudi Arabia.

Whether the intercepts show that the Saudis discussed harming Khashoggi as part of the plan to detain him “was not clear to officials with knowledge of the intelligence,” according to Harris.

“I don’t know why it couldn’t be,” she said. “In a case like this, you would have to have enough evidence, not just to meet probable cause, but to prove the case beyond a reasonable doubt.”

One issue would be the confidentiality of the intercepts, McCord said. “Would they be admissible in court? You would have to seek authority to put them in the record.”

Another former federal prosecutor who handled terrorism cases said the fact Khashoggi was a resident, not a U.S. citizen, was not an obstacle to prosecution.

“The terrorism statute defines victims as ‘U.S. citizens or nationals,’” the prosecutor said, “So non-citizens do have standing.”

This prosecutor said extraterritorial terrorism cases were usually addressed with civil, not criminal, charges, but added, “phone calls made to the United States could be a jurisdictional hook sufficient to bring criminal charges.”

Randall Jackson, former federal prosecutor in New York, said he would want to know where Khashoggi was when he received the phone calls, and the knowledge of the caller.

“You would need to show the callers had a specific understanding of what the consequences would be [for Khashoggi],” Jackson said. “A meeting of minds is necessary to meet the standard of conspiracy.”

McCord stressed the evidentiary bar would be high for murder charges.

“You’d have to show that the person made the call knowing that he [Khashoggi] was being lured to be killed or that his death could be reasonably foreseen,” she said.

The CIA’s assessment that MBS ran the operation that brought Khashoggi to the Saudi consulate in Istanbul includes evidence that gave CIA “high confidence” in its conclusion.

Among the evidence the agency has are audio recordings of a violent confrontation in the consulate. The Reuters report says that Qahtani supervised the interrogation via Skype. The CIA also has heard a phone call in which one of Khashoggi’s assailants says, after the journalist was dead, to a royal aide, “tell your boss” the journalist was dead. That could be sufficient to warrant an FBI investigation under Section 956.

“Prosecutors ask, ‘Was there a crime?’” McCord said, “Then they ask, ‘Is it under U.S. jurisdiction?’ and ‘Can I prove it?’ DOJ tends to forge ahead and think about policy considerations as a separate matter.”

Any prosecution of Khashoggi’s killers would have to pass muster with the Criminal and National Security divisions of the Justice Department. Both are headed by career officials who presumably act independent of politics.

Can U.S. prosecutors prove which Saudis killed Khashoggi? That depends on the admissible evidence, but if the evidence is strong enough, they have an obligation to bring a case. Perhaps Jamal Khashoggi and his family can get justice right here in Washington.