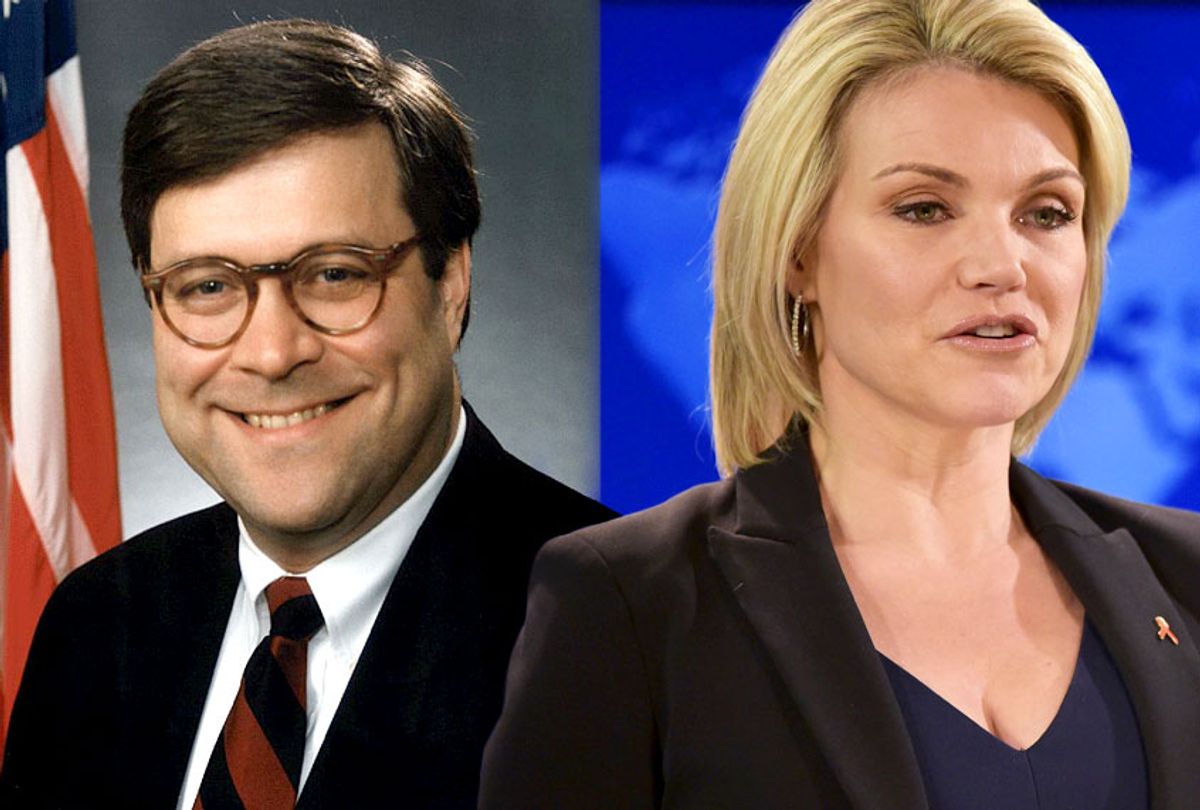 President Donald Trump confirmed his picks to fill top Cabinet posts on Friday, announcing that he would nominate William Barr to be his next attorney general and Heather Nauert to be his next ambassador to the United Nations.

If confirmed for a second gig as attorney general, Barr could soon oversee special counsel Robert Mueller's investigation into the alleged collusion between Trump's 2016 campaign and Russia. Barr, who worked at the CIA during the 1970s, previously served as attorney general to the late former President George H. W. Bush from 1991 to 1993. At the time, he was also Mueller's boss while the future special counsel was heading the Department of Justice's criminal division.

As with his predecessor, acting Attorney General Matthew Whitaker, Barr has publicly expressed his viewpoints on Mueller's investigation, albeit less aggressively. Barr's statements range from a mix of confidence that the investigation would not spiral out of control into a witch hunt to criticism of his decision to hire at least seven prosecutors to his team who had, in the past, made political contributions to Democrats.

"Because Attorney General Jeff Sessions has recused himself, the investigation into Russian interference is being supervised by Rosenstein and Dana Boente, acting head of the department’s National Security Division," Barr wrote in a Washington Post op-ed in May 2017. "Both men have long and exemplary service as career prosecutors in the department and were selected to hold political office as U.S. attorneys by President Barack Obama."

Two months later, when the Washington Post discussed the scrutiny being given to each hire by the special counsel, Barr rebuked Mueller's hiring decisions. “In my view, prosecutors who make political contributions are identifying fairly strongly with a political party,” Barr said. “I would have liked to see him have more balance on this group.”

Barr's op-ed also asserted that Trump made the right call to fire former FBI Director James Comey. "I do not dispute that Comey sincerely believes he acted properly in the best interests of the country," Barr wrote. "But at the same time, I think it is quite understandable that the administration would not want an FBI director who did not recognize established limits on his powers."

"It is telling that none of the president’s critics are challenging the decision on the merits. None argue that Comey’s performance warranted keeping him on as director," Barr continued. "Instead, they are attacking the president’s motives, claiming the president acted to neuter the investigation into Russia’s role in the election."

Whitaker, who replaced Jeff Sessions after he was forced to resign, was much more blunt in his rebukes of both Mueller and Comey. The acting attorney general, a Trump loyalist who previously served as chief of staff to Sessions, formerly blasted the Mueller probe in a pair of op-eds titled, "Mueller's investigation of Trump is going too far" for CNN and "I would indict Hillary Clinton: Opposing view" for USA Today. (He's also advocated for a new criminal investigation into Clinton over Uranium One.)

However, activists immediately pressed Barr to recuse himself from the ongoing Mueller probe. If William Barr is to be confirmed as Attorney General of the United States, he must make a public commitment not to interfere in Special Counsel Robert Mueller’s investigation," Common Cause President Karen Hobert Flynn said.

"Barr must commit to safeguarding the investigation as the president has not been shy about pressuring members of his administration to curb the probe by the special counsel into Russia’s attack on the 2016 election," Flynn continued. "Americans expect and deserve to know exactly what happened in the 2016 election. Despite the President’s constant criticisms, the investigation has led to a parade of convictions and indictments and must be allowed to proceed without interference."

As my colleague Shira Tarlo wrote about acting Attorney General Whitaker, "The Trump loyalist, who previously served as Jeff Sessions' chief of staff, is a GOP partisan and a former Fox News contributor. He has defended Trump's decision to fire FBI Director James Comey in an op-ed titled, "Comey served faithfully, but the president made the right decision." In a CNN op-ed, he argued that any investigation into Trump's personal finances would constitute "a red line" that Mueller is "dangerously close to crossing."

Also, "Heather Nauert will be nominated for the Ambassador to the United Nations." pic.twitter.com/U6yLmtkOOE

Nauert, a Trump loyalist who currently serves as spokeswoman for the State Department, would replace outgoing U.N. Ambassador Nikki Haley, who previously announced her resignation with Trump by her side in June. Outside of her current role, Nauert has relatively little foreign policy experience."She's very talented, very smart, very quick," Trump told reporters of his nominee on Friday. "And I think she's going to be respected by all."Nauert if a veteran journalist, who previously worked on the president's favorite morning show, "Fox & Friends." Her confirmation would further entrench the administration's links to Fox News. In July, Bill Shine, the former network executive who was purged in May 2017 after being named in multiple lawsuits for his handling of the mounting sexual harassment scandals facing Fox, joined the White House as its new communications director replacing Hope Hicks. The Trump loyalist was, in turn, tapped as the executive vice president and chief communications officer at "New Fox."