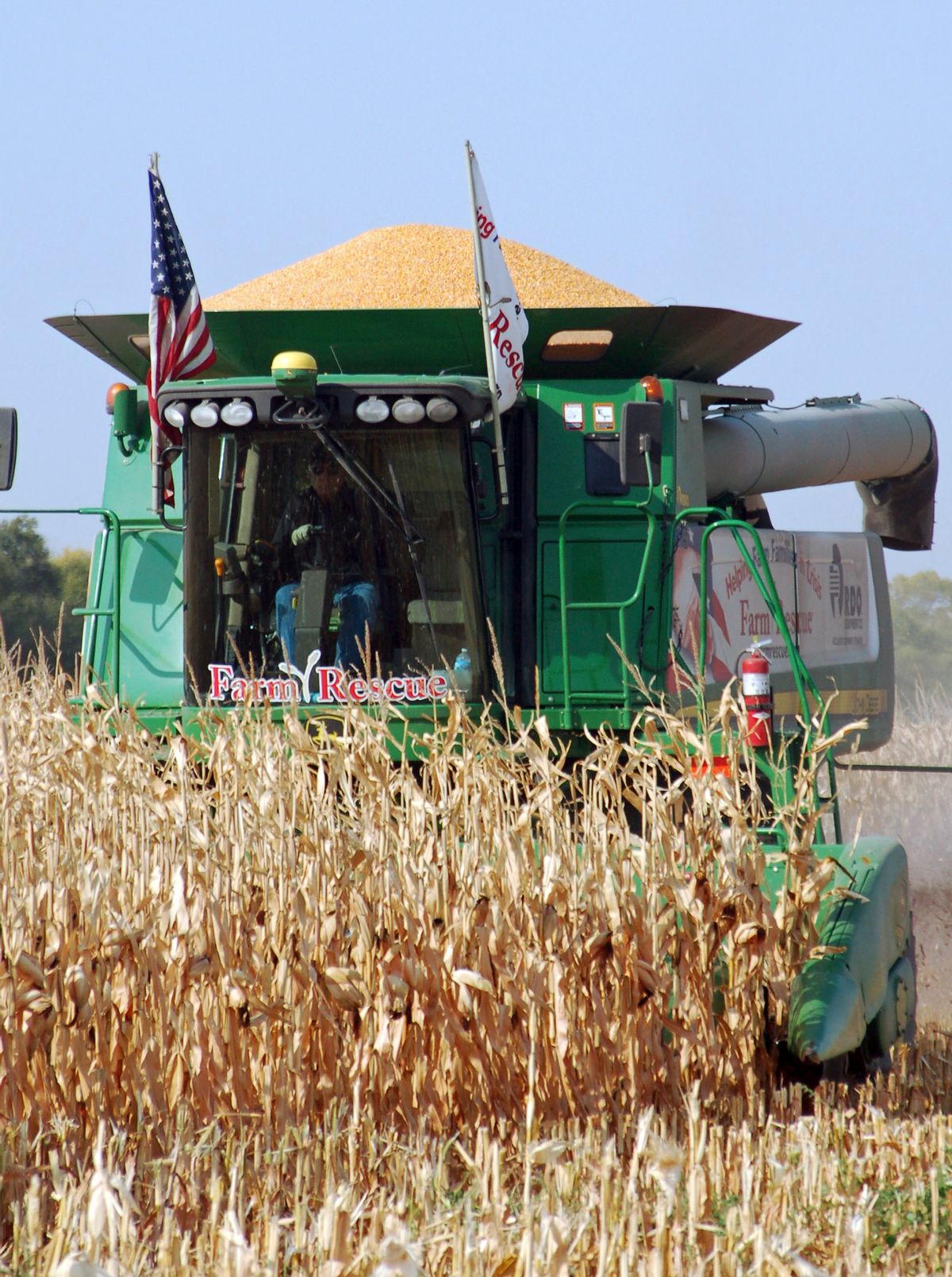 If you’re seeking some good news duringthese troubled times, look at the ecologicallysound ways of producing food that have percolated up from the grassroots in recent years. Small farmers, environmentalists, academic researchers and food and farming activists have given us agroecology,holistic resource management, permaculture, regenerative agriculture and other methods that can alleviate or perhaps even eliminate the global food system’s worst impacts:biodiversity loss, energy depletion, toxic pollution, food insecurity and massive carbon emissions.

These inspiring testaments to human ingenuity and goodwill have two things in common: They involve smaller-scale farms adapted to local conditions, and they depend more on human attention and care than on energy and technology. In other words, they are the opposite of industrial monocultures — huge farms that grow just one crop.

But to significantly reduce the many negative impacts of the food system, these small-scale initiatives need to spread all over the world. Unfortunately, this has not happened,because the transformation offarmingrequires shifting not just how food is produced, but also how it is marketed and distributed.The food system is inextricably linked to an economic system that, for decades, has been fundamentally biased against the kinds of changes we need.

These policies provide a huge competitive advantage to large monocultural producers and corporate processors and marketers, which is why industrially produced food that has been shipped from the other side of the world is often less expensive than food from the farm next door.

The environmental costs of this bias are huge. Monocultures rely heavily on chemical inputs — fertilizers, herbicides, fungicides and pesticides — which pollute the immediate environment, put wildlife at risk and — through nutrient runoff — create “dead zones” in waters hundreds or thousands of miles away. Monocultures are also heavily dependent on fossil fuels to run large-scale equipment and to transport raw and processed foods across the world, making them a major contributor to greenhouse gas emissions. In fact, scientists estimate the greenhouse gas toll of the global food system at one-third of total emissions.

There are social and economic costs as well. In the industrialized world, smaller producers can’t survive, their land amalgamated into the holdings of ever larger farms — in the process decimating rural and small town economiesand threatening public health. In the Global South, the same forces pull people off the land by the hundreds of millions, leading to poverty, rapidly swelling urban slums and waves of economic refugees. In both North and South, uprooted small farmers easily spiral into unemployment, poverty, resentment and anger.

There are also risks to food security. With global economic policies homogenizing the world’s food supply, the 7,000 species of plants used as food crops in the past have been reduced to 150 commercially important crops, with rice, wheat and maize accounting for 60 percent of the global food supply. Varieties within those few crops have been chosen for their responsiveness to chemical fertilizers, pesticides and irrigation water — and for their ability to withstand long-distance transport. A similar calculus is applied to livestock and poultry breeds, which are skewed toward those that can grow rapidly with inputs of grain and antibiotics in confined animal feeding operations. The loss of diversity even extends to the size and shape of food products: harvesting machinery, transport systems and supermarket chains all require standardization. The end result is that more than half of the world’s food varieties have been lost over the past century; in countries like the US, the loss is more than 90 percent. The global food system rests on a dangerously narrow base: without the genetic variety that can supply resilience, the food system is vulnerable to catastrophic losses from disease and the disruptions of a changing climate.

The benefits of local food

The solution to these problems involves more than a commitment to ecological models of food production: it also requires a commitment to local food economies. Localization systematically alleviates a number of environmental problems inherent in the global food system, by:

Local food provides many other benefits.The smaller-scale farms that produce for local and regional markets require more human intelligence, care and work than monocultures, thus providing more employment opportunities. In the Global South, in particular, a commitment to local food would stem the pressures that are driving millions of farmers off the land.

Local food is also good for rural and small-town economies, providing not only more on-farm employment, but supporting the many local businesses on which farmers depend.

Food security is also strengthened because varieties are chosen based on their suitability to diverse locales, not the demands of supermarket chains or the requirements of long-distance transport. This strengthens agricultural biodiversity.

Local food is also healthier. Since it doesn’t need to travel so far, local food is far fresher than global food; and since it doesn’t rely on monocultural production, it can be produced without toxic chemicals that can contaminate food.

Although local food is an incredibly effective solution-multiplier, agribusiness has gone to great lengths to convince the public that large-scale industrial food production is the only way to feed the world. But the fact is that the global food economy is massively inefficient.

The global system’s need for standardized products means that tons of edible food are destroyed or left to rot. This is one reason why more than one-third of the global food supply is wasted or lost; for the US, the figure is closer to one-half.

The logic of global trade results in massive quantities of identical products being simultaneously imported and exported — a needless waste of fossil fuels and a huge addition to greenhouse gas emissions. In a typical year, for example, the US imports more than 400,000 tons of potatoes and 1 million tons of beef, while exporting almost the same tonnage of each. The same is true of many other food commodities, and many other countries.

The same logic leads to shipping foods across the world simply to reduce labor costs for processing. Shrimp harvested off the coast of Scotland, for example, are shipped 6,000 miles to Thailand to be peeled, then shipped 6,000 miles back to the UK to be sold to consumers.

The supposed efficiency of monocultural production is based on output per unit of labor, which is maximized by replacing jobs with chemical- and energy-intensive technology. Measured by output per acre, however — a far more relevant metric — smaller-scale farms are typically 8-20 times more productive. This is partly because monocultures, by definition, produce just one crop on a given plot of land, while smaller, diversified farms allow intercropping— using the spaces between rows of one crop to grow another. What’s more, the labor ‘efficiencies’ of monocultural production are linked to the use of large-scale equipment, which limit the farmer’s ability to tend to or harvest small portions of a cropand thereby increase yields.

For more than a generation, now, the message to farmers has been to “get big or get out” of farming, and a great number of the farmers who remain have tailored their methods to what makes short-term economic sense within a deeply flawed system. To avoid bankrupting those farmers, the shift from global to local would need to take place with care, providing incentives for farmers to diversify their production, reduce their reliance on chemical inputs and fossil fuel energy, and to seek markets closer to home. Those incentives would go hand-in-hand with reductions in subsidies for the industrial food system.

After decades of policy bias toward global food, some steps in this direction are being taken by local and regional governments. In the US, for example, most states have enacted “cottage food laws” that relax the restrictions on the small-scale production of jams, pickles and other preserved foods, allowing them to be processed and sold locally without the need for expensive commercial kitchens.

Several towns in the state of Maine have gone even further. Seeking to bypass the restrictive regulations that make it difficult to market local foods, they have declared “food sovereignty” by passing ordinances that give their citizens the right “to produce, process, sell, purchase, and consume local foods of their choosing.”

In 2013, the government of Ontario, Canada, passed a Local Food Act aimed at increasing access to local food, improving local food literacy and providing tax credits for farmers who donate a portion of their produce to nearby food banks.

Even bolder action is needed if there is to be any hope of eliminating the damage done by the global food system. A crucial first step is to raise awareness of the costs of the current system, and the multiple benefits of local food. No matter how many studies demonstrate the virtues of alternative ways of producing and distributing food, the destructive global food system is unlikely to change unless there is heavy pressure from the grassroots to change the entire system. That needs to start now.

Helena Norberg-Hodge is the founder and director of Local Futures. She is the author of the book Ancient Futures (Chelsea Green, 2016) and the producer and director of the award-winning 2011 documentary The Economics of Happiness. Helena is the recipient of the Right Livelihood Award, the Goi Peace Prize and the Arthur Morgan Award.