Mueller keeps closing in as Trump rages on: We can't get complacent

Trump and the Republicans believe they're entitled to rule, democracy be damned. It's a deeply dangerous moment 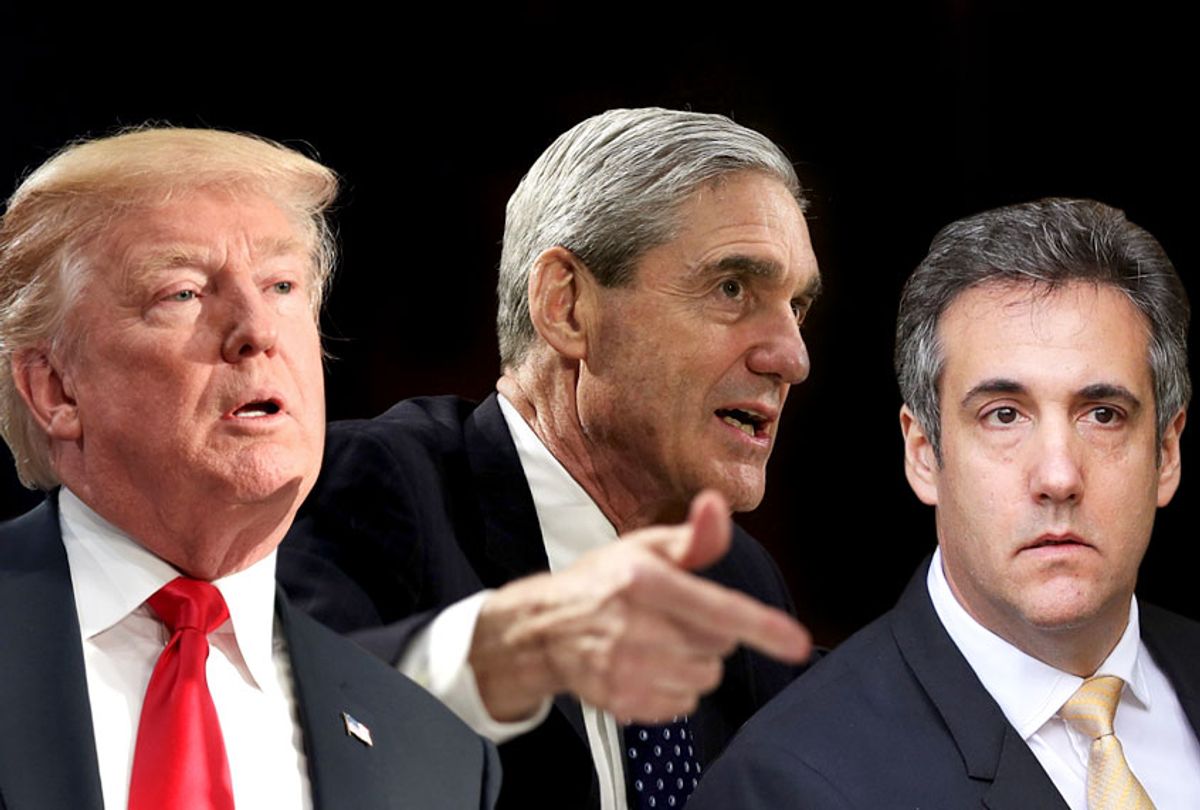 You can tell a lot about a person by how they react to "A Few Good Men," the 1992 movie starring Jack Nicholson as a corrupt Marine and Tom Cruise as the noble young military lawyer who takes him down. The movie has a famous scene where Nicholson's character, Col. Nathan Jessup, explodes in rage after being exposed for his part in the killing of a young Marine and subsequent cover-up. "You can't handle the truth!" he barks, while raving about how hard his job is and how he feels this entitles him to do the awful things he did.

The screenwriter, Aaron Sorkin, isn't known for his subtlety. I always thought that Jessup was clearly the villain, an imperious monster who is lashing out like a cornered rat. But no -- apparently there are a lot of people who read Jessup as a hero for standing up against those namby-pamby "rule of law" liberals and for the belief that the way to stay safe is to entrust all power to authoritarian strongmen.

These wildly divergent interpretations of a 26-year-old movie are relevant, of course, because Donald Trump seems to be spending most of his time these days in a Jessup-style snit as special counsel Robert Mueller is circling ever closer. After a couple of days where it seemed that a staff member was writing Trump's tweets in clumsy imitation of the boss, the president wrapped his tiny fingers around the phone Thursday night and started a tirade that continued into Friday, mostly geared towards insinuating that Mueller and a cast of federal officials and Democratic opponents are the real criminals.

And since Trump appears to believe he's starring in "The Apprentice: Obstruction Edition," he peppered these rants with his favorite catchphrases, "Fake News" and "Witch Hunt." Yes, usually with the random capitalization implying these are Trump® brands. Whether or not there will be T-shirts and golf clubs emblazoned for sale with these catchphrases remains to be seen.

Trump was clearly reacting to early Friday reports that Mueller would filing sentencing memos for his former campaign manager Paul Manafort and former lawyer and fixer Michael Cohen. Late Friday, that finally happened. First we learned that Cohen had revealed substantial information about contacts between Russian agents and the Trump campaign, and that there had been talk about aligning Russian President Vladimir Putin with Trump to benefit Trump financially.

Trump, fooling no one, tweeted, "Totally clears the President. Thank you!"

Not long after that, the Manafort filing dropped, with its allegation that the former Trump campaign manager had told extensive lies to prosecutors after cutting a plea deal -- including lying about his contacts with the Trump administration, which apparently continued as recently as May of this year. It isn't clear who, specifically, Manafort talked to in the White House, but one name certainly comes to mind.

It's hard to imagine that anyone could read Trump's defensive raging on Twitter — complete with promises, very likely made up on the spot, that his lawyers were preparing a "Counter Report" to rebut Mueller's findings — and conclude anything but that this behavior stems from a guilty conscience. But as with the Rorschach test that is Nicholson's famous scene in "A Few Good Men," there are clearly many Americans who share Trump's fury that anyone dare question him in any way, much less hold him accountable.

As I've argued before, Trump and his defenders are gradually moving away from the innocence defense and towards what might be called the Jessup defense: Sure, he may have committed crimes, but he's our leader, and we must have faith that he had a good reason to do it. How well that will hold up in the face of solid evidence that Trump's reasons appear to be financial gain and ego remains to be seen, but there is little doubt this will be the fallback position the Trump base, whose temperature must be taken on an hourly basis, will resort to.

It's easy to retreat to a space of cynical detachment in the face of all this. Oh, the president's lying again? He's raving like the murderer in "A Tell-Tale Heart"? And his followers refuse to see this for what it is, but instead are telling themselves he's a noble patriot fighting boldly against a "globalist" conspiracy? Yawn. What's new?

But this past week should be a reminder of how serious this situation actually is. CNN, which was already put in real danger when a pro-Trump terrorist sent a pipe bomb to their studios, was subject to another bomb threat Thursday night. In a wild coincidence, Trump tweeted, "FAKE NEWS - THE ENEMY OF THE PEOPLE!" one minute after the threat was phoned in. The juxtaposition ended up being a reminder that Trump hasn't dialed down the incendiary rhetoric that inspired his superfan Cesar Sayoc Jr. to attempt to murder Hillary Clinton, Barack Obama, George Soros and many others back in October.

This past week was also a reminder that the Jessup-style authoritarianism doesn't stop with Trump, nor is it limited to his followers who have grown addled by their devotion to believing Dear Leader knows best. It's sadly no exaggeration to say that the entire machinery of the Republican party is now oriented towards the goal of ending democratic rule. In Wisconsin, Republicans are cynically moving to drastically reduce the power of the governor before Democrat Tony Evers takes office, and aren't even hiding open that their purpose in doing this is to block the will of the people.

This isn't just a single issue, but comes on the tail of similar efforts in North Carolina. Michigan Republicans are considering a similar move, as well. And all this comes after an election so weighted down with voter suppression and gerrymandering that even when Democrats win, they lose. In Wisconsin, for instance, Democrats got 205,000 more votes this election than Republicans in state assembly races, but the state is so badly gerrymandered that Republicans still won 27 more seats.

Add to all this the starkest symbol of the Republican power grab, revelations that the race in North Carolina's 9th congressional district may have been fixed because a consulting firm, paid by Republican Mark Harris' campaign, is accused of stealing absentee ballots. Harris is a pastor who had a fellow pastor preaching that "it was God who sets up kings" at his election night party, but now it seems the Harris campaign felt God needed a little help installing the "correct" congressman into office.

The common theme holding together Trump's rage, the election cheating, the gerrymandering and the post-election power grab is a Jessup-style belief that Republicans are simply entitled to rule, and should not have to be constrained by petty concerns about democracy or rule of law.

Unfortunately, we do not live in a Sorkin movie. No one is going to come in to haul Trump and his authoritarian cronies away while Tom Cruise calmly says, "You're under arrest, you son of a bitch." If it were that easy, this would have all been resolved long ago. Instead, the battle will be protracted and victory for the side of right is far from certain. Watching the House Democrats take the gavel in January is a good first step, but we have a long way to go before we can turn this country around, if we ever can.