Their last "easy" record: The Hold Steady's "Stay Positive" and what came after 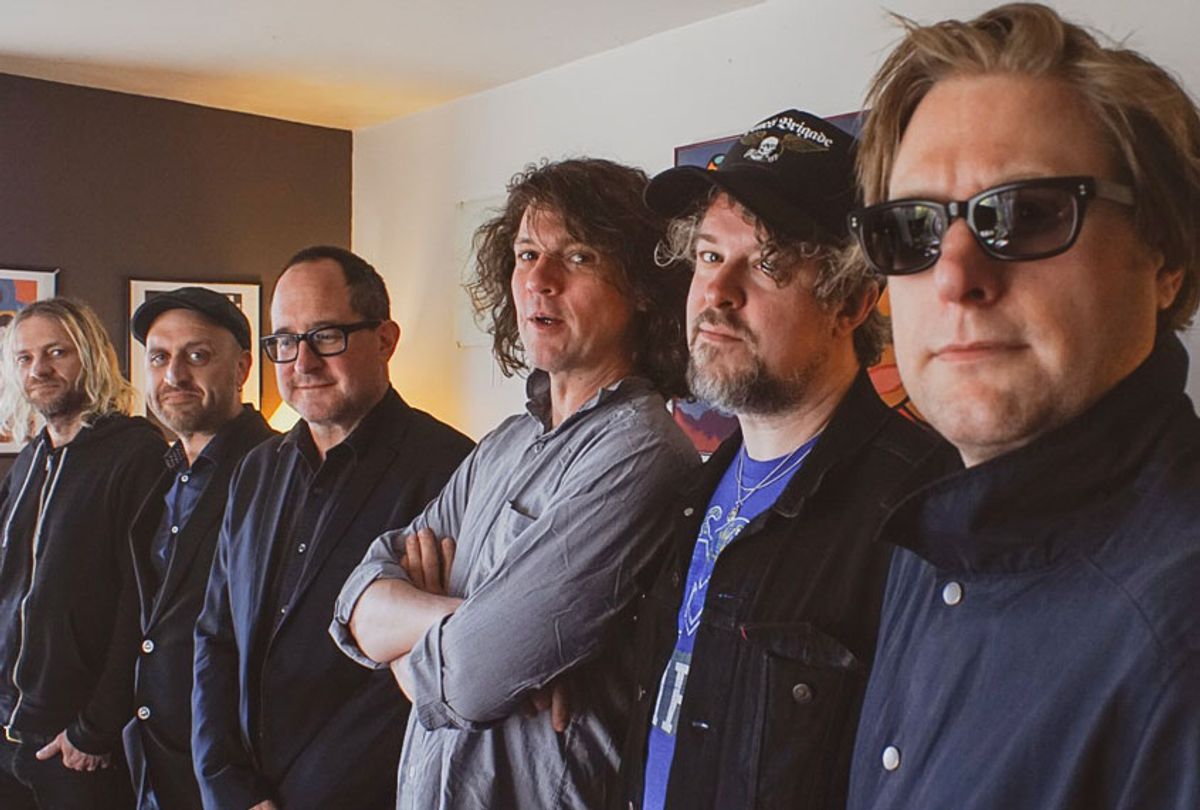 When The Hold Steady released their fourth album “Stay Positive” in 2008, the rock band from Brooklyn with roots in Minneapolis was riding high on the success of their breakout 2006 hit “Boys and Girls in America,” which had set off “a whirlwind of touring,” frontman Craig Finn tells us. Suddenly the band, whose live shows were already word-of-mouth legendary stateside, were playing dates in Europe and the UK as well. So when “Stay Positive” launched, they were poised to build on that success.

“‘Sequestered [in Memphis]’ was probably the biggest song we ever had as far as radio,” Finn says. “’Stuck [Between Stations]’ somehow seems bigger now, but ‘Sequestered’ got more radio play than anything else.”

“It definitely feels like the last record that was very effortless and just kind of, like . . . I don’t want to say we willed it into existence without too much blood sweat and tears, although there’s always that in a record,” says guitarist Tad Kubler.

The success of “Sequestered in Memphis” as a single and the reception of the album as a whole isn’t the only reason “Stay Positive” remains a pivotal point in the band’s history. It was also the last album keyboardist Franz Nicolay played on before leaving the band in January 2010, after the album’s tour wrapped and they had to decide what would come next.

All's well that ends well, as fans know — Nicolay is back with the band, which expanded in the years he was gone to add guitarist Steve Selvidge alongside drummer Bobby Drake and bassist Galen Polivka. The band played a series of anniversary shows for "Stay Positive" this year, and Vagrant Records just released a deluxe three-LP reissue of the album this week.

We talked to Finn, Kubler, and Nicolay for our podcast, “These Miracles Work,” a mini-series revisiting “Stay Positive” and its aftermath for the album’s tenth anniversary.

Over five episodes, we explored how the album was written and recorded, the role the band's success played in changing how they approached writing song, and why they think of "Stay Positive" as their last "easy" record — with the two that came after "more troubled." We also delved into how visions differed for the future of the band at one point, and how they reconciled those differences for another ten-year anniversary in 2016, and are now steadily writing songs together between less-frequent but no less epic shows.

In episode one, we looked at where the band was when they started writing the album, which they see as a companion piece to “Boys and Girls in America,” and how producer John Agnello — who produced the previous album too — helped guide the process.

Listen to Episode 1, “Start With a Positive Jam”:

The success of “Boys and Girls in America” meant the band wasn’t coming off the road any time soon, so if they wanted to write a new album, they were going to have to do it while they worked. “Franz and Tad and myself would go into hotel rooms after the shows and we had these acoustic demos we were just making on laptops,” says Finn.

That time on the road also brought the band back to punk and hardcore, thanks to tour manager Craig McQuiston’s influence. And with that they rediscovered, as Finn puts it, "the power of the wordless chorus" for live audiences.

“At the beginning of The Hold Steady we were all rediscovering classic rock that we’d grown up with but kind of gotten away from in our 20s a little bit,” says Finn. “I feel like through [McQuiston] we started to revisit punk and hardcore more and talk about it more. That got me thinking about how cool hardcore is, and when Tad had the riff for [title track] ‘Stay Positive,’ I was like, let’s make a good positive hardcore song.”

A side benefit of the "whoa oh oh oh"-style chorus in a song like "Stay Positive" for a band that's picked up a lot of new fans in a couple of years? It's easy to sing along. "They can put their fists in the air," says Nicolay. "And you already know the song."

Listen to episode 2, "Our Psalms Are Sing-Along Songs":

“I think of ‘Stay Positive’ as quite a dark record,” Nicolay tells us. “The Hold Steady has this reputation as a good-time party band, but I think that’s always been misleading, and an intentional misreading of a lot of the stuff. But ‘Boys and Girls [in America]’ was much more of a party record, while ‘Stay Positive’ was a much darker proposition.”

The darkness is there, in the lyrics — on songs like "One for the Cutters," when a college girl's night out with townies turns violent, and on the heartbreaking ballad "Lord, I'm Discouraged," a song that's very personal for Finn. And it had started to creep into the band's lives, too, as they dealt with the increased time on the road, sleeping on a tour bus and feeling removed somewhat from the more grounded aspects of community that once made touring more fun.

"And the more people you get involved," he says, "sometimes that becomes more difficult, too. Everybody has an opinion about what you could be doing or what you should be doing. And it’s just like, you know, we just want to write songs. I think that can make it, I don’t want to say more difficult, but it has an effect on the process and on the band."

"I feel like in rock and roll, your success sort of dooms you," says Finn. "You just start playing so many shows, the bus as we spoke about, all the stuff. It exhausts you in a way that’s gonna be hard to keep going in the way we were going, and in the way we were trying to write."

"A rock band is an imperfect organization," he continues. "In a fraternity, the seniors tell the freshmen to clean up. A rock band can’t really have a leader. Everyone’s gotta be cool. It’s hard to keep a pure rock band going without some sort of break down in creativity or otherwise."

And the two years between the making of "Stay Positive" and when Nicolay decides to leave the band were "two extremely fraught and busy years," the keyboardist says. That doesn't mean he has a simple answer for why he decided to strike out on his own.

But it wasn't everything. Nicolay had a solo album he wanted to tour behind, too. At the time he says he felt "at the end of the day this is Craig and Tad’s band."

"In any career that you have, if you’re and up-and-coming banker and you realize you’re never gonna make partner, you’ll strike out and start your own firm," he explains. "Which isn’t about ambition necessarily, it’s just about the economics of music. If you have the capacity to write songs and you’re the third wheel in the band, you owe it to yourself to give it a shot."

(Episode 4 is a critics' discussion between us and Salon contributor Annie Zaleski. It's kind of its own thing, but you can hear it if you subscribe to the podcast.)

The band released two albums without Nicolay, 2010's "Heaven Is Whenever" and "Teeth Dreams" in 2014. Then one day, Nicolay gets a voicemail from Finn asking if he'd like to play with them on a series of 2016 shows celebrating the tenth anniversary of "Boys and Girls in America."

"I really had to think about it," Nicolay says. "I tend to go through life closing doors and not reopening them. That was that chapter of my life. But I thought, what the hell, you know, I figured it would happen eventually."

"But then it was super fun and easy!"

That led to more shows when their schedules allowed and when it made sense, which then led to "the next hurdle," as Nicolay says — writing together again.

A year ago, the new powerhouse version of Hold Steady released a single on Bandcamp, “Entitlement Crew,” with a b-side, “A Snake in the Shower.” Every four months or so, they put out another release like that, and there are currently eight new songs up.

“'Stay Positive,' as far as LPs, was the last real creative high point,” said Finn. “I would say I feel really strongly about the songs we recorded in the past year being closer to that, and feeling closer to that level.”

“At this point in our career as a band and individually as musicians I think we’re not trying to prove as much, or like, nobody has necessarily the same chips on their shoulder aesthetically," says Nicolay. "I think having Steve in the mix smoothes over a lot of stuff because there’s just that much more sonically involved."

And while occasionally, there still may be creative differences, they no longer carry the weight they may have ten years ago.

"Look, writing songs is still a little bit of a fraught process, because it’s creative, and anything creative you’re going to have a bit of disagreement or friction, but I think that everybody’s much older and much calmer and I can only speak for myself, I feel much more comfortable just expressing my opinion and if I’m outvoted I’m outvoted, or I discover that the opinion I thought would be a minority opinion is actually shared. I feel much more comfortable in the process,” says Nicolay.

Listen to episode 5, "We Are Our Only Saviors":