A rush to impeachment now would backfire on Democrats. Instead, it's time to focus on serious investigations 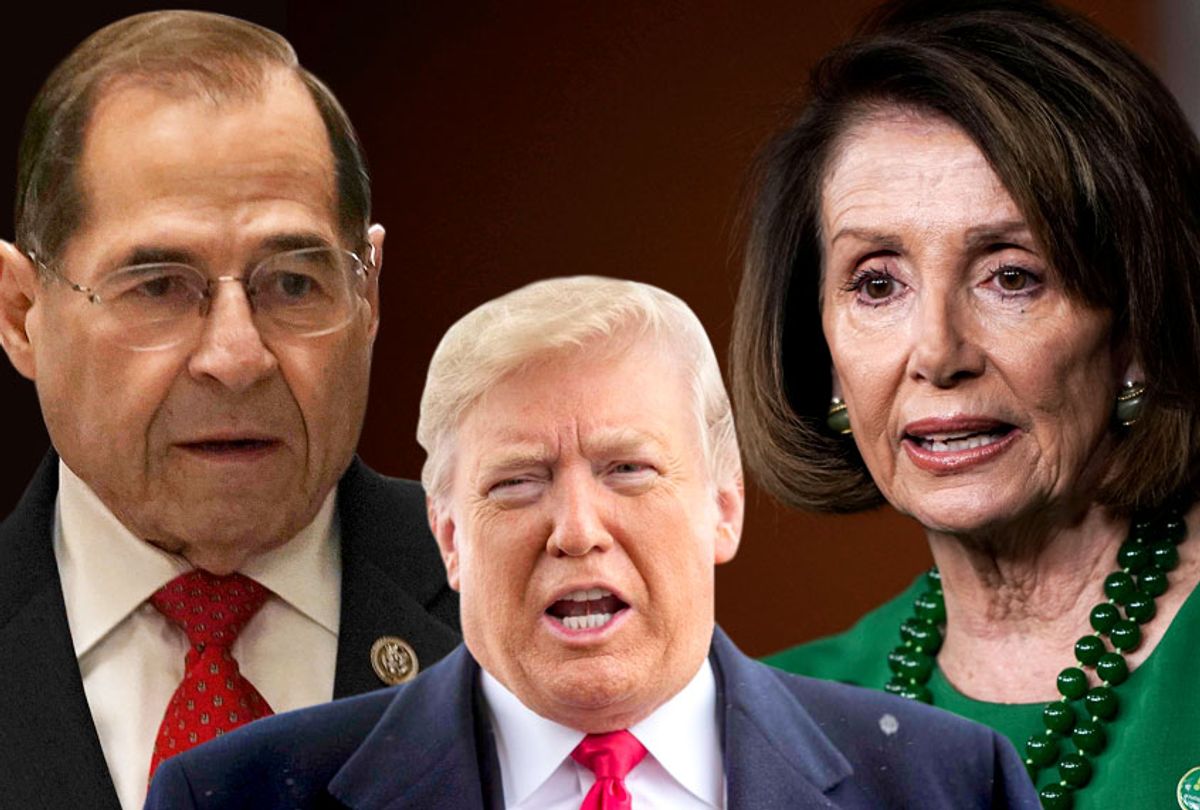 Like most Americans who retain some semblance of sense, I was happy to see what was in the sentencing memos offered by federal prosecutors regarding the fate of Donald Trump's former campaign manager Paul Manafort and Trump's former lawyer/fixer Michael Cohen. Those memos introduced new evidence pointing to Trump's likely involvement in a couple of criminal conspiracies.

The most clear-cut evidence relates to Trump's involvement in campaign fraud. Cohen has alleged, with audio recordings to back him up, that Trump directed illegal payoffs to women who said they'd had affairs with him. Both documents also hint that Trump could be implicated in obstruction of justice conspiracies and some kind of involvement with Russian election crimes, but there is clearly a lot more information to be discovered and released before drawing any firmer conclusions on that front.

Still, it's all very exciting for those eager to see this president go down. So it's no surprise that the I-word is starting to get tossed around again. Pressure is starting to build on House Democrats to move toward impeachment the second Nancy Pelosi's well-manicured hands touch the gavel.

"I think what this totality of today’s filings show that the House is going to have little choice, the way this is going, other than to start impeachment proceedings," John Dean, Richard Nixon's former lawyer -- who flipped on the then-president during the Watergate scandal -- argued on CNN Saturday.

I understand people's impatience, but I would also recommend the words of wisdom I offer to my cat while presenting a spoonful of chicken livers: Slow down there, buddy, or you'll choke yourself.

These new court filings feel like they change everything. The president has been directly accused of a crime for which his longtime lawyer will likely be doing hard time. So while the Russian investigation hasn't completely played out, federal prosecutors have now accused "Individual 1," who is clearly Trump, of a crime. So it seems like there's enough to start the impeachment process.

But in the big-picture sense, the situation hasn't changed at all. We're still in the same place we were after Election Day, with an expanded Republican majority in the Senate that is fully committed to doing everything it can to thwart the rule of law and the will of the people to protect the great orange menace glowering in the Oval Office. Convicting Trump in a Senate impeachment trial would require the votes of at least 20 Republicans, which is not even remotely conceivable.

This is no small thing. If and when Trump is acquitted in the Senate, he will immediately equate that with an exoneration. We know this, because he was back on Twitter Monday, declaring that anything short of a "Smocking Gun" is evidence of his innocence, a stance he has repeatedly made clear, albeit with dubious grammar and spelling.

This argument won't just be backed up by Fox News, either. While the mainstream media has largely given up on the hope that Trump himself will ever act "presidential," most of the punditry maintains this deep desire to believe that Republican office-holders, by and large, are honorable and well-meaning. There's no way most pundits will ever admit that the entire Republican majority in the Senate supports Trump not because they believe he's not guilty, but because they don't care if he's guilty. So no matter how damning the evidence, there will be little to  no media outcry over a corrupt group of Senate cronies covering up for Trump's s crimes.

We can tell that's how it would go, because that's exactly how it played out with the confirmation of Brett Kavanaugh to the Supreme Court. Senate Democrats caught Kavanaugh telling multiple falsehoods, even before the hearing over a sexual assault allegation put forward by Christine Blasey Ford. After Blasey Ford's allegation came out, Republicans actively suppressed evidence against Kavanaugh by refusing to subpoena witnesses or another woman with a similar story to tell. Even with that evidence suppression, Blasey Ford's story was still far more credible than Kavanaugh's, especially after he spent so much of his testimony telling ridiculous lies about his drinking and the gross sex jokes in his high school yearbook.

Despite all that, only one Republican was unwilling to vote to confirm Kavanaugh, Sen. Lisa Murkowski of Alaska. Will Senate Republicans shrug off compelling evidence of crimes in order to protect their own political interests? That question has been answered. Now Kavanaugh, like Clarence Thomas before him, has donned his robes and most of the media has moved on, instead of holding the Republicans accountable for this corruption.

So there's no real question of how it goes if Trump is impeached: He will not be convicted. He will declare himself exonerated across the board. And the media will move on, almost as if the whole thing had never happened.

That's why Rep. Jerry Nadler, D-N.Y., incoming chair of the House Judiciary Committee, hit the right notes in saying that while the illegal payments Cohen alleges are clearly "impeachable offenses," whether "they're important enough to justify an impeachment is a different question."

That rhetoric suggests that House Democrats still intend to take this very, very slowly. They're right to do so, for a number of reasons. The main thing is that the Russia investigation isn't even close to done yet. While Trump's alleged campaign finance violations are interesting, it's far more important to get to the bottom of the Russia conspiracy. Premature impeachment proceedings could disrupt the conclusion of that investigation.

Second of all, there's the question of what happens to the people around Trump. Cohen and Manafort's sentencing memos suggest that the number of people involved in the Russian conspiracy could be large indeed. This isn't just about Trump, but about finding out the extent to which Vice President Mike Pence, members of the Trump family and other administration officials are involved. So while going slow is aggravating, it also offers the opportunity to make sure that everyone who is guilty of a crime faces justice.

But let's just imagine a miracle: Democrats not only impeach Trump, but somehow persuade enough Republican senators to convict him and remove him from office. (Though this atheist believes Christ will return to earth before that happens.) Know this: The first thing the newly installed President Pence will do is pardon Trump, who will simply return to his golden tower in New York to spend his days watching Fox News and tweeting irately until he dies. After which, because he wasn't  a convicted criminal, he'll get a state funeral and glowing obituaries full of thoughtful discussion about the ways he was misunderstood and the deeper meaning of it all.

Contrast this with the possibility that, as Rep. Adam Schiff, D-Calif., said, Trump could "face the real prospect of jail time" if his immediate successor doesn't pardon him. For that to happen, that successor must surely be a Democrat. And for that to happen, we have to wait until the 2020 election -- or until both Trump and Pence are somehow shoved out the door such that the next in line of succession is Speaker Nancy Pelosi. Either way, the only path to getting a Democrat into the White House is to put impeachment on ice right now, and focus on investigating Trump and his administration more thoroughly, a process that may very well take the next two years, as this guy has got many fingers deep in the corruption pie.

So let's keep our eyes on the prize: Jail time for Donald Trump, and no state funeral. To get there, patience will be required.