While Nancy Pelosi and Chuck Schumer tag teamed Trump, the quietest, stillest person in the room drew our attention 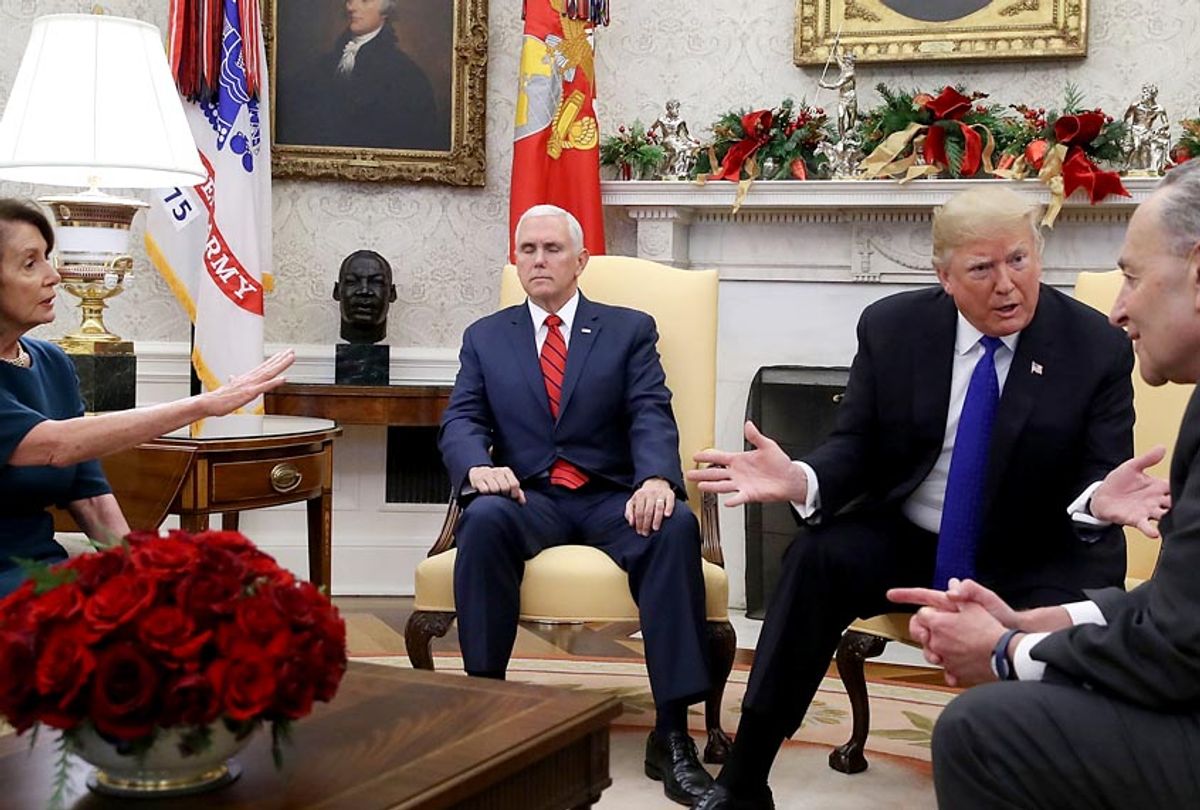 The fiery meeting in the Oval Office on Tuesday showed President Donald Trump, Senate Minority Leader Chuck Schumer and soon-to-be House Speaker Nancy Pelosi all gearing up for their post-political careers as reality TV stars. For Trump, of course, that will be a return to his foundation. But he's not letting the presidency stop him from keeping the belligerent persona he's spent decades sharpening on screen in shape, and in the Oval Office meeting he delivered a seriously polished performance.

What was supposed to be a brief photo opportunity turned into a heated exchange. Trump, who acted like maybe his nap had been cut short, declared, "If we don't get what we want one way or the other . . . I will shut down the government," speaking of funds for his long-promised border wall. "I am proud to shut down the government for border security."

Schumer refused to make eye contact with Trump, instead speaking directly to the cameras in the room, but the most awkward performance was delivered by Vice President Mike Pence, who sat silently between the president and Pelosi, his eyes sometimes closed, like he had steeled himself for this meeting with an edible or maybe one of Roseanne Barr's Ambiens.

At one point, when Schumer brought up the Washington Post and Trump's lies, the president even tried to make a joke with Pence — like haha, who takes the Post seriously?! — but the vice president did not budge.

Was he asleep? Wishing he could literally be anywhere else? Meditating through the stress? Either way, as Twitter users do, they lit Pence up.

Some users thought Pence was channeling some outer-body transference.

Yet some remained unconvinced that the figure next to Trump was actually Pence at all. I mean, who can sit that still, especially during that exchange? Did anyone check his pulse?

So maybe Pence isn't ready for reality TV like the others. There's always scripted!

When Pence's eyes were actually open, they were fixed, trance-like, on some indeterminate point between Pelosi and Schumer. And when he did move, it was even more awkward, like when this eagle-eyed viewer spotted the vice president trying to check his watch . . . that he wasn't wearing.

Hopefully someone woke Pence up when the whole thing was over. Or not?

However, as Salon's Heather Digby Parton wrote, Pence may have had good reason to try to blend into the walls during that meeting. She reported that there is some possibility that Trump might try to dump Pence ahead of the 2020 presidential race:

It's actually quite understandable that Pence was, well, a bit pensive. The meeting was a train wreck, and it's plausible that he had recently been on the receiving end of Trump's wild temper and was just happy not to be involved. After all, Trump had just suffered a major humiliation when Pence's chief of staff, Nick Ayers, pulled out of an apparent agreement to move up and replace Trump's departing chief of staff, John Kelly. Trump had foolishly announced Kelly's departure as one of his distraction ploys during last week's rollout of bad legal news and no doubt held Pence somewhat responsible for the humiliation when his boy backed out. That's just how he rolls.

The Internet can turn literally anything into a good meme, but Mike Pence jokes bring a special satisfaction. He's not an easy target like Trump, whose ignorance and unrestrained approach to politics and life in general provides ample fodder. Pence is mostly just scary. He hides behind sanctimonious manners and political rhetoric, which helps him more effectively push a racist/homophobic/xenophobic/misogynist agenda. Pence doesn't just embody every hateful policy that the Trump administration has enacted, but he knows how to get those things done politically, and has long before he became vice president. Laughing at him — knocking him down a peg or two — offers those who abhor his politics a feeling, even if fleeting, of catharsis.

So long live Mike Pence jokes, which hopefully will outlive his political career. He deserves to be the punchline every day. Though I have to say — by far — frozen Mike Pence is the best Mike Pence.