President Donald Trump: "I am proud to shut down the government for border security" 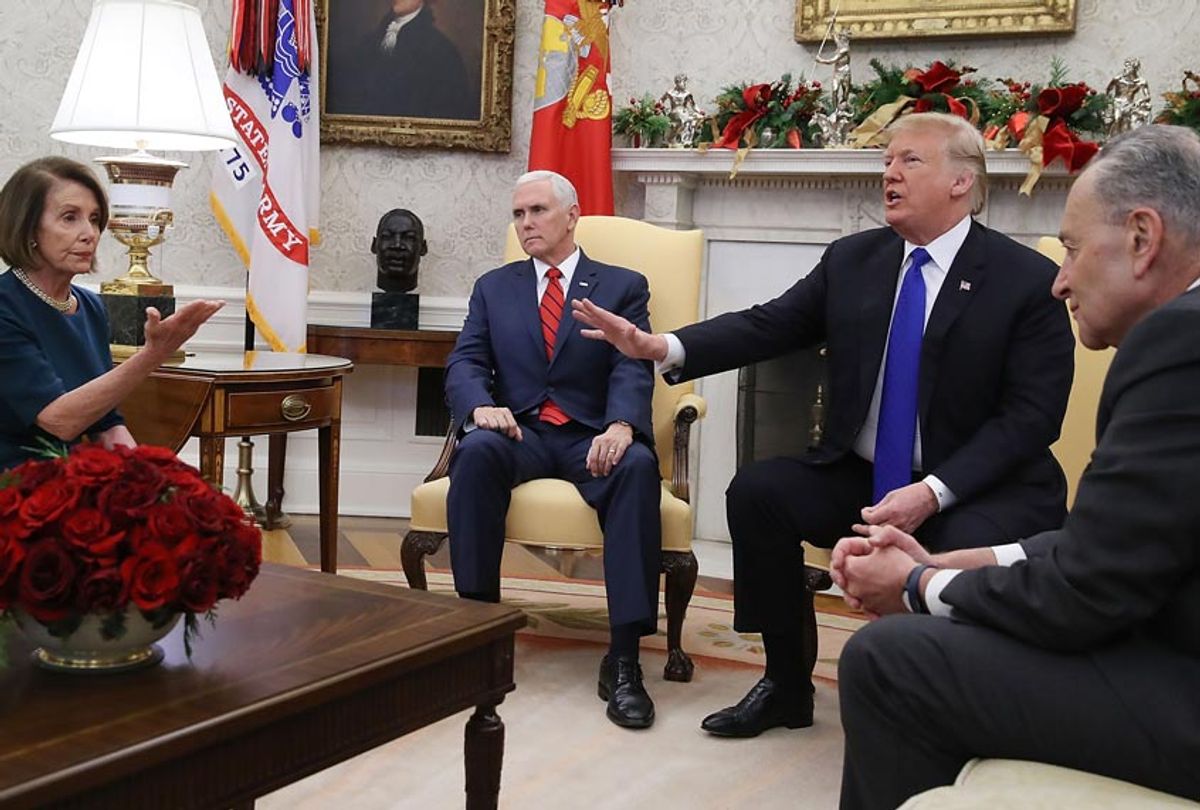 President Donald Trump on Tuesday repeatedly threatened to shut down the government if Congress does not provide the funds he claims are needed to build a wall along the U.S.-Mexico border.

"If we don't get what we want one way or the other . . . I will shut down the government," Trump said during a meeting at the White House with Democratic Leader Nancy Pelosi and Senate Minority Leader Chuck Schumer.

During the heated exchange, which unfolded in front of the press before an official meeting began, Trump declared, "I am proud to shut down the government for border security . . . I will take the mantle of shutting it down."

Congressional leaders last week signed a two-week spending bill to avert a partial shutdown amid the funeral services for late President George H.W. Bush, pushing the new deadline to Dec. 21. If Trump and Congress cannot agree to a new government spending package by then, large parts of the federal government will shutter. However, the Department of Defense is funded through the end of next September, NBC News reports.

Trump on Tuesday said it was unlikely that he would strike a deal with Pelosi, the longtime California congresswoman who is poised to become speaker of the House next month when her party takes back control of the House of Representatives this January, and Schumer, a New York Democrat. "We may not have an agreement today," he said. "We probably won't."

After the public session, Pelosi and Schumer issued strict warnings. "This Trump shutdown – this temper tantrum that he seems to throw – will not get him his wall and will hurt a lot of people," Schumer told reporters.

Later, back at the Capitol, Schumer said the meeting was "productive" in that "the president showed what he really thinks. He wants to shut down the government."

Pelosi said last week that she and many other Democrats consider the wall to be "immoral, ineffective and expensive" and noted that Trump repeatedly promised during the 2016 presidential campaign that Mexico would pay for it — a promise that Mexico has repeatedly rebuked.

Senate Majority Leader Mitch McConnell (R-Ky.) told the Associated Press that circumstances were "beginning to resemble a movie we've seen before," noting that Democrats forced a three-day shutdown in January over an impasse on immigration.

"It didn't work out very well," McConnell said. "The reality is that the president's request is entirely reasonable."

Sen. Lindsey Graham (R-S.C.), an ardent Trump supporter, praised the president from the sidelines of Twitter.

"Great job sticking to your guns on border security, Mr. President!" he wrote. "You are right to want more border security funding including Wall money. They are WRONG to say no."

Graham also advocated for Trump to incorporate into spending package a provision that would protect some undocumented immigrants who were brought to the country as children from deportation as a bargaining chip in an effort to put pressure on Democrats to approve money for the wall.

Meanwhile, some Democrats took to social media to back their congressional leaders.

"Remember when Mexico was going to pay for the President's wall?" Rep. Val Demings (D-Fla.) tweeted. "Shutting down the government over this foolish idea would be wildly irresponsible. A shutdown would cripple the economy and degrade transportation security during the holidays."