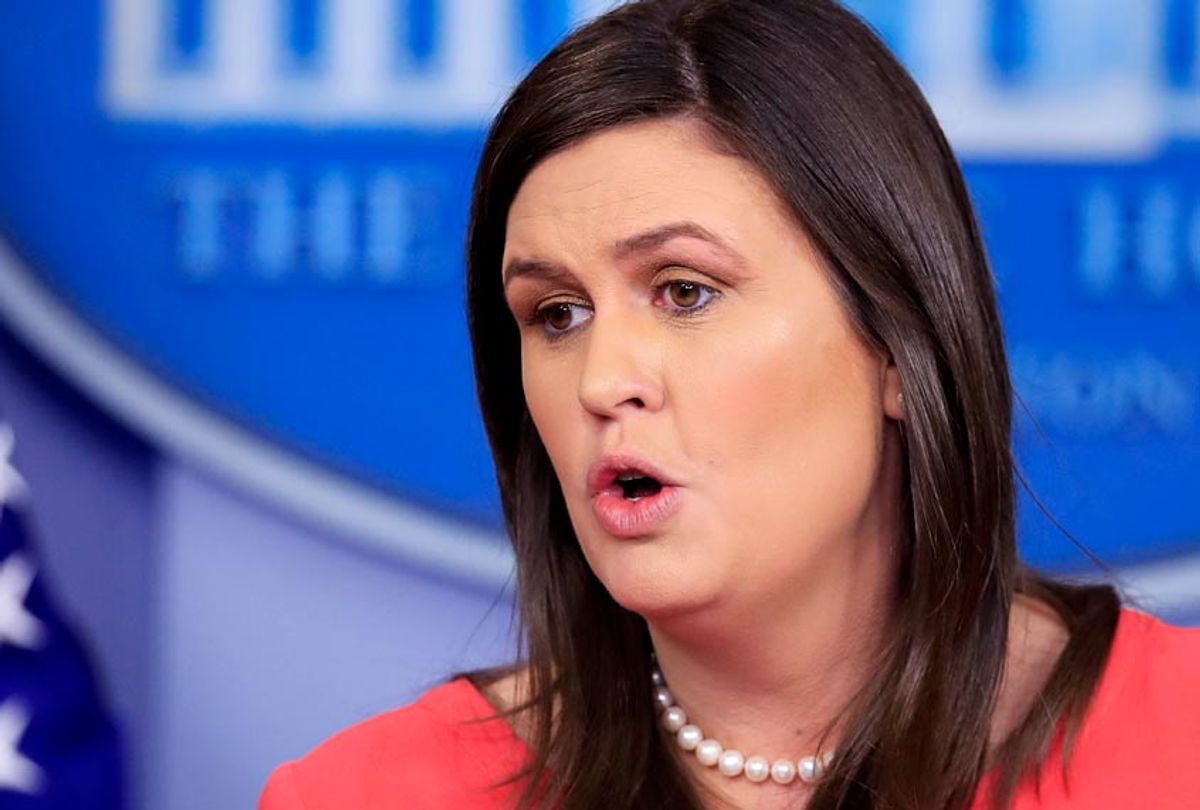 White House Press Secretary Sarah Huckabee Sanders hopes to be remembered for being "transparent and honest" when her tenure at 1600 Pennsylvania Avenue comes to a close.

In conversation with Politico's White House reporter Eliana Johnson, Sanders revealed that she hoped her legacy would include showing up every day and doing "the very best job that I could put forward the president's message."

"To do the best job that I could do to answer questions, to be transparent and honest throughout that process," Sanders told Johnson at the sixth annual Women Rule Summit. "And to do everything I could to make America a little better that day than it was the day before."

Although she hopes to be remembered as "transparent and honest," Sanders has been called out for lying by members of the media throughout her tenure in the West Wing. In June, Sanders was widely criticized for her refusal to explain the inaccurate statements she made following the revelation that members of President Donald Trump's 2016 presidential campaign had secretly met with a Kremlin-linked lawyer.

At the time, CNN's John Berman blasted the press secretary for spewing falsehoods about who authored the official White House response to the controversial Trump Tower meeting that included the president's eldest son, Donald Trump, Jr.

"Maybe she's OK with lying. There's no question that she spread lies at this point," Berman said at the time. "Whether or not she was told the truth, I guess we don't know. But she spread a lie, and she is the White House press secretary. And she spread a lie – and allowed it to hang out there for months."

Josh Dawsey of The Washington Post asked Sanders at the time, "How are we supposed to know what to believe? How can we believe what you're saying from the podium if his [Trump's] lawyers are saying it's entirely inaccurate?"

In August, Sanders offered a "correction" after incorrectly stating that Trump had created more than three times as many jobs for African-American workers in his year and a half in office than former President Barack Obama did in his entire eight years. Sanders said in her correction that the timeline was off, but the job numbers were correct.

As Salon's Rachel Leah previously wrote, "Sanders' correction was a rare moment admission of error from the Trump White House and specifically from the communications department, which has repeatedly spun out falsehoods in the face of clear contrary evidence — from Sanders incorrectly claiming that diversity visa immigrants are not vetted to her declaration that 'multiple news outlets' reported that Obama had allegedly ordered wiretapping of Trump as a candidate."

Earlier this year, Sanders said it "bothers" her that people think she misleads the media. She told the New York Times in May that she tries to deliver the "best and most accurate information at the time that I can" and feels a responsibility to be accurate.

"One of the few things you have are your integrity and reputation," Sanders said in the interview. "There's a difference between misspeaking or not knowing something than maliciously lying."