Baby-snatching in Brooklyn: This is how we punish mothers for working 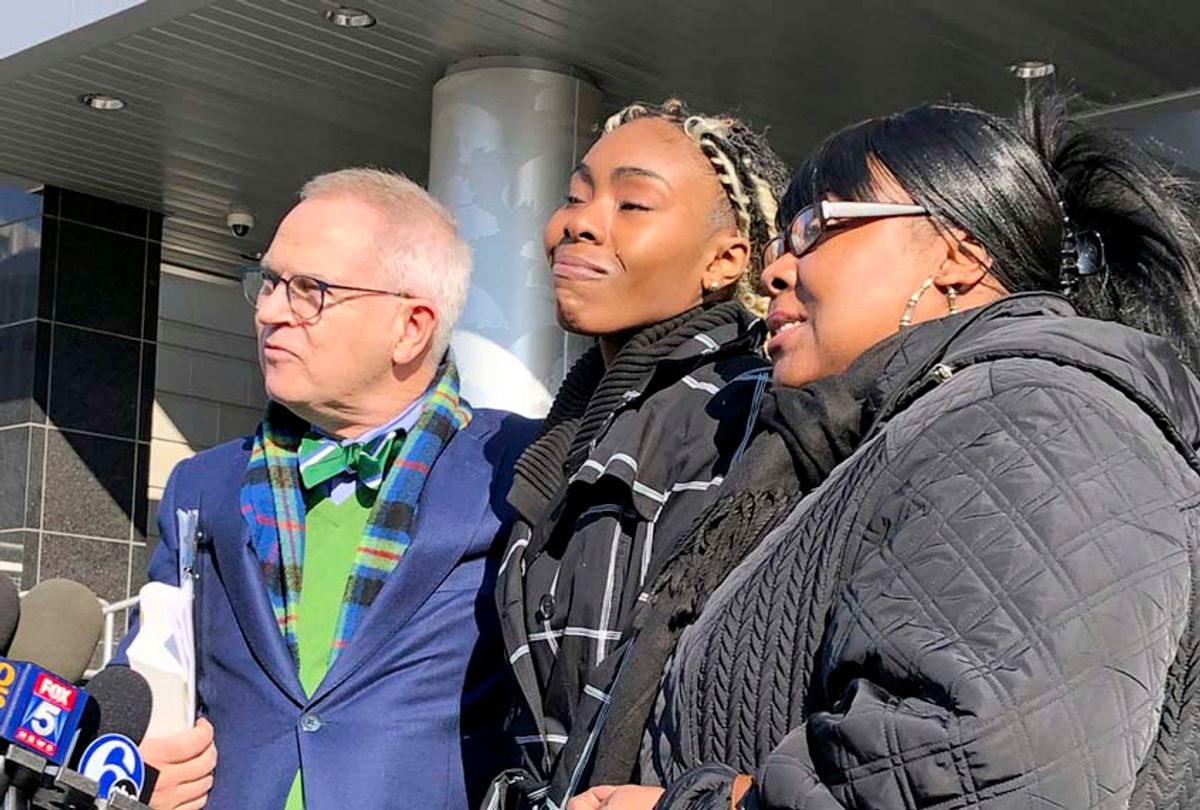 Over the past weekend, yet another horrifying video of police brutality flew across the internet. This time, the victim was a 23-year-old New York woman named Jazmine Headley and her one-year-old son, Damone, who was taken from his struggling mother's arms while the panicked woman yelled, "They're hurting my son!" and the angry crowd yelled at the police.

This now-infamous video clip was made all the more horrific when the public learned the reason the police came to arrest Headley: For sitting on the floor. She had been waiting for hours to resolve a child care issue at a social services office in Brooklyn, without a chair, and wanted to sit on the floor instead of stand, as a security guard told her to. So the guard called the police.

Headley sat in jail for five days, before public outrage led to her released and a decision to drop all charges, with the usual promises from authorities to work to prevent such terrible things from happening again. This incident has generated a great deal of discussion about police overreach, racism and the criminalization of poverty. But it's also an important illustration of another chronic problem in the United States: Our social service systems, which are supposed to help people live better lives, all too often set them up to fail.

Politicians from both parties love to talk up the value of work and how important it is to get Americans working. But for all this high-minded rhetoric, the reality is that social service programs often end up being hindrances to work.

“There's a narrative out there that it's easy to get assistance or that too many people are getting assistance," Rebecca Vallas, the vice president of the Poverty to Prosperity Program at American Progress and a former legal aid attorney, told Salon. "In reality, it can be a full-time job just to access and maintain eligibility for the most meager assistance.”

Headley's story illustrates this conundrum. Headley has a job as a cleaner, and needed a government program to pay for child care so she could maintain that job. But the program had quit reimbursing her son's day-care provider, so she had to spend countless hours waiting at a social services office to get the issue resolved. Because of this, she ended up in jail for several days, which obviously prevented her from going to work and endangered her employment.

“Jazmine had a job. Jazmine wants to work. She said, ‘All I want to do is be able to go to work,'" Lisa Schreibersdorf told The Guardian.

"Finding a folding chair for mother and child would’ve been the obvious solution," Stacia Brown writes at New York magazine. "This, of course, would only have occurred to someone inclined to show compassion to black mothers."

The lack of compassion that led to a failure to find a woman and her small child anywhere to sit down infects the entire system of social services that, in theory, is supposed to help people work their way out of poverty. Instead, there's an attitude of what Vallas called "bureaucratic disentitlement," where people who reach out for help are met with hostility, red tape and needless stigmatization.

“This has really become part of the Republican playbook, as a backdoor way to cut programs that help low-income people without making it look like they're actually cutting the programs," Vallas said.

Republicans have started to attach more and more work requirements to social safety net programs — and have even considered adding such requirements to the food assistance program — and always with the justification that this will somehow get people working.

In reality, Vallas said, these work requirements "are really burdensome reporting requirements" which are understood by many conservatives as "a strategy for taking assistance away from people." That extra burden can often make it harder for people to work. Piling reporting requirements and office visits on people means they have less time to work — and for people who often have to hold down two or even three jobs to survive, "that sets up impossible choices that people should never have to make, between keeping your family's assistance and keeping your job."

In practice, work requirements are largely about pushing people off assistance, whether they have a job or not. For instance, Arkansas implemented a work requirement for people on Medicaid, which led to more than 8,000 people losing benefits in the span of two months. Despite what Republicans would have the public believe, that's not because these folks were too lazy to work.

Many Medicaid recipients in Arkansas weren't even aware that they were supposed to be reporting work hours, because the state failed to contact them. In addition, the state required people to use a website to report, even though a significant portion of Medicaid enrollees have little or no internet access. If they did reach the website, they found it only worked for part of the day and the form was incredibly complex, requiring 13 separate steps and elaborate mathematical formulas to determine what constituted an hour of work.

Headley's arrest happened in New York, which is exclusively governed by Democrats and isn't quite as hostile to people seeking help as Republican states. But Vallas argues that the intense red tape is still a result of "an intentional culture where the decision to award benefits get much more scrutiny than those to deny benefits." The current version of this can be traced back to the 1990s, when President Bill Clinton, always eager to show off his bipartisan bona fides, signed a welfare "reform" bill, meant mainly to cut people off from benefits, that was written by Republicans.

The 90s was a bad time in New York City, as well, as Republican mayor Rudy Giuliani helped usher in an era of government hostility towards people seeking benefits. As a report by the New York Bar Association notes,  Giuliani pushed large numbers of people who needed help out of assistance programs by creating "an ever-increasing number of administrative obstacles and an overarching emphasis on workfare as the primary activity."

A couple of decades later, the idea that getting government assistance should require a miserable slog of endless red tape has become normalized. But some activists and policy-makers are pushing back. Last year, for instance, the Center for Law and Social Policy released a report outlining ways that states can clean up the bureaucratic burdens that keep people from getting the help they need, which in many cases can help them turn around their lives and get better jobs. Of course, implementing such ideas requires leaders who actually want to help people out of poverty, which is not universally the case in much of this country.

“We need to start from a place of ensuring that wages pay enough so that people are able to feed their families and aren't having to seek assistance" to supplement inadequate pay, she said, adding that people also need access to affordable child care and paid parental leave.

In fact, most able-bodied adults who need food assistance do work, and it's the. same story with Medicaid. People who require assistance often look like Headley — working parents who simply don't make enough money to cover expenses for themselves. Higher wages would go a long way to fix this problem. So would creating universal programs, such as federally subsidized day care, that would reduce the financial burden of work for all working people. One reason social services offices are overloaded is because the government fails to fund and organize them properly. Another reason is that so many employers are able to get away with paying their workers too little and expecting the government to fill in the gaps.

Headley's story is about the horrors of racist policing, absolutely. But it's also a bigger story about how racism and class prejudice and predatory capitalism have created a system where working people are underpaid, exploited and subjected to punishing government programs that have been deliberately shaped to be humiliating. None of this is inevitable. But the solution starts with politicians who actually support working people, instead of just spouting empty homilies about the value of work.