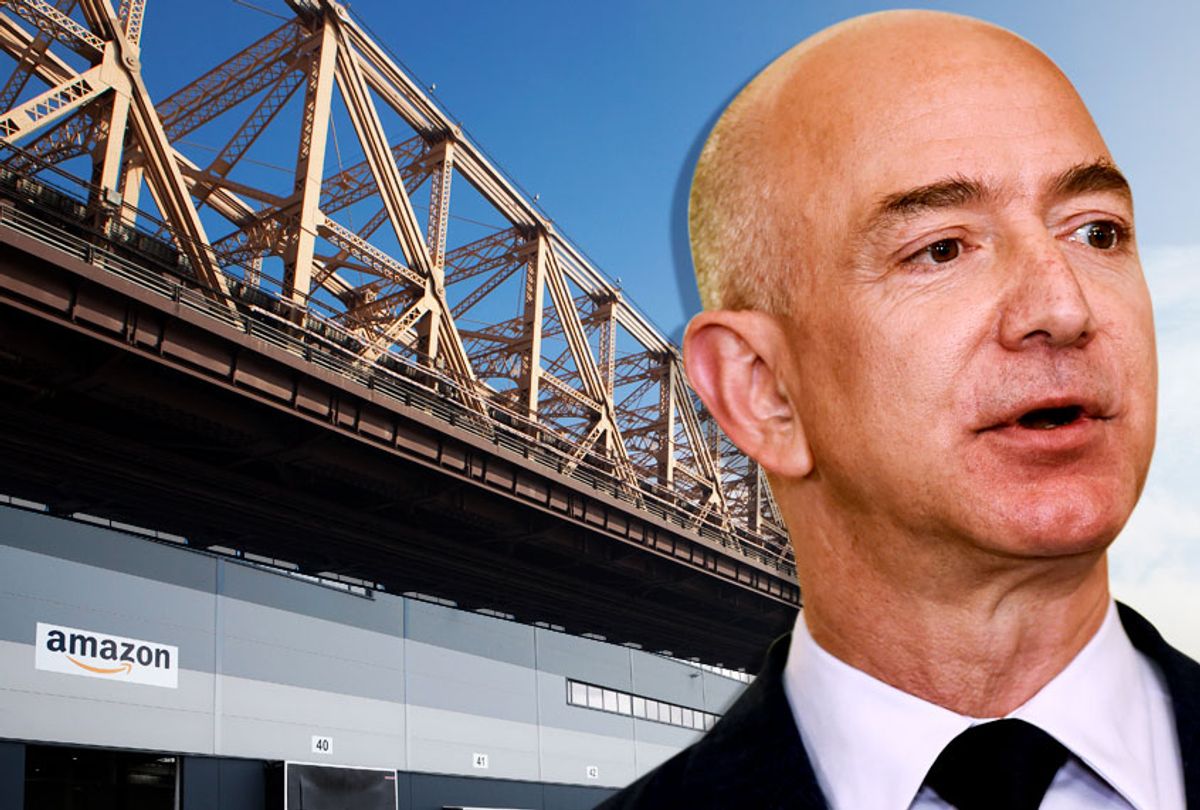 Students at a New York public university are baffled and outraged by an endorsement from their school’s board of directors of a controversial city giveaway to the company owned by the world’s richest man. Their endorsement follows a tuition hike adding to the students’ outrage.

The board members of the City University of New York (CUNY) provided valuable public- relations credibility for a multibillion-dollar subsidy to Amazon for establishing a second headquarters in the New York area. The board’s statement claimed that the move would somehow benefit the school’s largely low-income students — not typically prime candidates for Amazon’s high-paying jobs.

“They’re using CUNY for political gain when CUNY itself, the members that make up CUNY, are adamantly against it,” Carlos Jesus Calzadilla, a Brooklyn College student and founder of the YPA, told WhoWhatWhy. “Thompson is irresponsible. We’ve been calling on CUNY to get more funding and instead they’re doing tuition hikes again, adjunct professors have poverty wages, infrastructure is crumbling, hiring freezes everywhere.”

Students were left to question how the city could afford to give Amazon huge tax breaks while their campuses were not receiving the attention or funding they required. In a Facebook event created by the Brooklyn College chapter of the Young Progressives of America (YPA), a nonprofit that encourages young people to “implement America’s progressive agenda and facilitate positive change,” the organization says that CUNY should be focusing on its current problems, such as decrepit learning environments and inadequate pay for adjunct professors, rather than currying favor with one of the world’s richest men.

CUNY, New York City’s public university system, has an enrollment of more than 270,000 students spread across 25 campuses in the city’s five boroughs. With 11 senior colleges, seven community colleges, and seven graduate and honors colleges, CUNY is the largest urban university system in the United States. And the fact that New York could offer nearly $3 billion worth of incentives to Amazon caused uproar from CUNY students and faculty who have been pleading for the city to improve the school’s system.

Students question why the Board of Trustees would support an outside company when the students feel the board has neglected its duty to the school.

“Unless Amazon is providing guarantees of housing, tuition, and investment in the infrastructure of institutions, there is nothing to be gained. Amazon threatens the actual people who rely on CUNY,” Corrinne Greene, a Brooklyn College student, told WhoWhatWhy. “The company is vehemently anti-union, while CUNY professors are fighting for a fair contract. Amazon actively works with ICE, and a large group of CUNY students are undocumented or come from immigrant families, many of whom don’t qualify for state or federal financial aid.”

The billions of dollars in tax incentives will be funded by New York taxpayers, adding to the ire of students.

The CUNY Board of Trustees, 15 of 17 of whom are appointed by Governor Andrew Cuomo and Mayor Bill de Blasio, have publicly supported the Amazon move. Chairperson William C. Thompson and Chancellor Vita Rabinowitz wrote an op-ed calling Amazon’s arrival an “extraordinary opportunity.”

“CUNY is a lead partner in Amazon’s expansion as the great public institution of higher education in New York City,” they wrote. “CUNY is positioned to equip large numbers of diverse New Yorkers to take advantage of these opportunities, and to provide Amazon and other tech companies with a robust pipeline of talent.”

Thompson, who served eight years as the Comptroller of New York, is currently the chief administrative officer of the investment banking and financial services company Siebert Cisneros Shank & Co., LLC. As CNN reported, computerized trading has replaced the need for humans on Wall Street, and New York may be focusing its efforts on technology to be the next driver of the state’s economy. Cuomo, who appointed Thompson as comptroller and chairperson of the CUNY Board of Trustees, has been an avid supporter of Amazon’s decision to move to New York and insisted that New York would receive $27.5 billion from Amazon in taxes.

In a CUNY press release, Thompson said, “We will commit our considerable college assets to ensure that Amazon has a strong pipeline for talent, ideas and innovation,” but did not elaborate on what the assets would be. A representative for Thompson told WhoWhatWhythere was nothing else the chairperson wanted to add to his statement.

Thompson refers to CUNY’s student body as richly diverse and ready to hold the 25,000 Amazon-promised jobs. In the current agreement between New York and Amazon, there is no local-hiring requirement.

“They are not really going to recruit from CUNY. People moving in are going to cause gentrification, spelling disaster for communities,” Calzadilla said. “It’s out-of-touch logic. The fact that that money is not going to CUNY is detrimental to the institution.”

Alexandra Ocasio-Cortez, who was recently elected to represent the 14th congressional District in New York, voiced her own concern regarding Amazon’s possible arrival. In response to constituent complaints, Ocasio-Cortez has said that she fears Amazon HQ2 will speed up gentrification in the area, inflate housing prices, and displace current residents.

In 2013, Thompson himself bemoaned the effects of gentrification in New York City, in particular the neighborhoods of Harlem and Bedford-Stuyvesant. When asked if gentrification made these neighborhoods better, Thompson said, “If you look at people being pushed out, if you look at people who are the backbone of the neighborhood, people who have been there for decades and kept Harlem strong while others weren’t here, then the answer is no.”

Amazon first announced its plans for a second headquarters in September 2017, accepting bids to persuade the company to move to their city. Amazon announced in November 2018 its plans for HQ2, splitting operations between Long Island City, New York, and Crystal City, Virginia.

While city leaders tried their hardest to entice Jeff Bezos, Amazon’s CEO, with tax breaks, training facilities, and free parking spots at the airport, many residents were not so keen on accommodating the headquarters of a company worth almost $1 trillion. They had heard the horror stories coming out of Seattle, Amazon’s hometown and location of its first headquarters. Overcrowding, bidding wars over housing, and an increase in homelessness have plagued Seattleites because of Amazon.

New York City was far from offering the largest tax breaks and best incentives, and there is little concrete evidence explaining Amazon’s choice of Long Island City to house HQ2. New York state promised Amazon $1.525 billion in incentives, which includes New York’s Excelsior program — which would give Amazon a $48,000 reimbursement for each of the 25,000 jobs the company promised. Additionally, New York City programs that reward companies for job creation outside of Manhattan could save Amazon another $1 billion.

The New York City Council will hold three hearings through December to question city officials and Amazon about the secret negotiations regarding the company’s move to New York. The hearings will examine the project and its impact on the community.