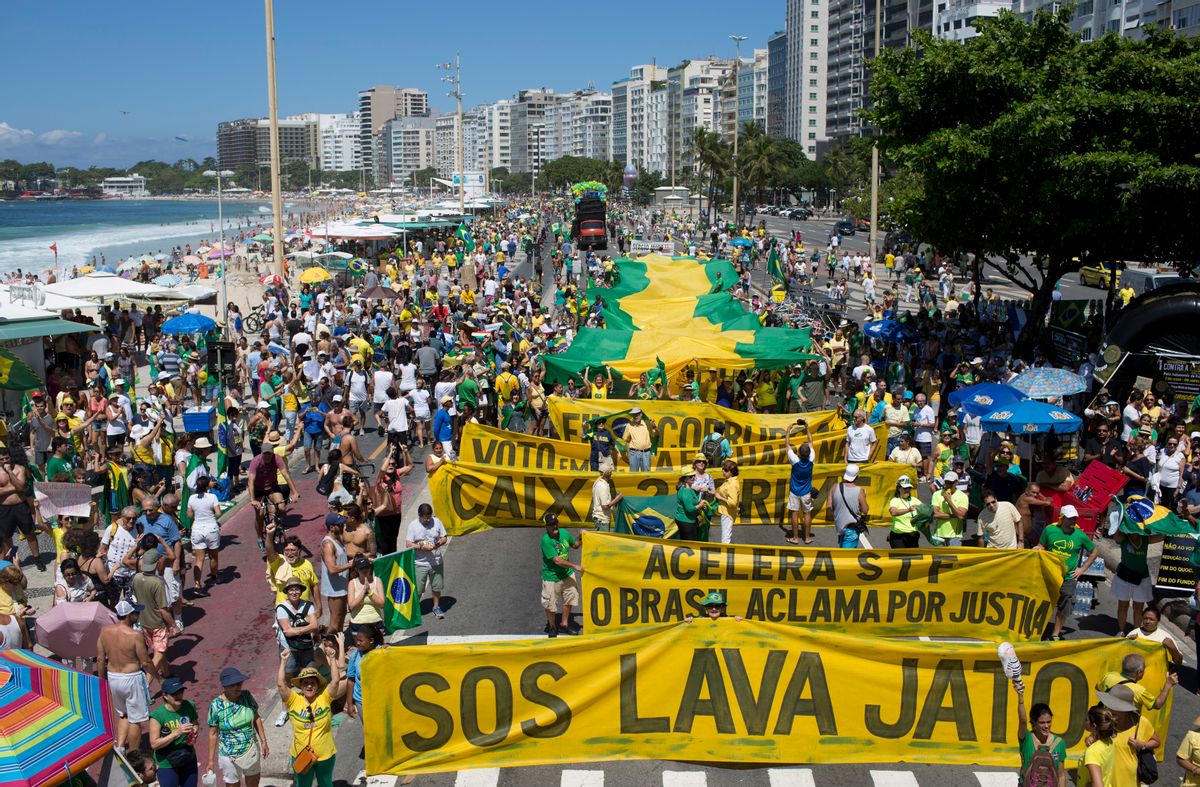 In this March 26, 2017, file photo, people march against corruption and in support of the Car Wash investigation on Copacabana beach, in Rio de Janeiro, Brazil. Three years since the so-called Car Wash investigation began, dozens of the country's elite have been jailed, and there is no end in sight. The investigation has expanded, both within Brazil and to several Latin American countries, with daily revelations about accusations of wrongdoing that threaten many political leaders. (AP Photo/Silvia Izquierdo) (AP)
--

Why is it so difficult even for huge countries with large, diversified economies to maintain independence from the West?

If anyone could have done it, it was Brazil. In the 19th century it was imagined that Brazil could be a Colossus of the South to match the U.S., the Colossus of the North. It never panned out that way.

And 100 years later, it still hasn’t happened. With a $2 trillion GDP (a respectable $9,800 per capita), nearly 200 million people, and a strong manufacturing base (the second largest in the Americas and 28.5 percent of its GDP), Brazil is far from a tiny, weak island or peninsula dependent on a patron state to keep it afloat.

When Luiz Inacio “Lula” da Silva won a historic election to become president of Brazil in 2003, it seemed like an irreversible change in the country’s politics. Even though Lula’s Workers’ Party was accused of being communists who wanted to redistribute all of the country’s concentrated wealth, the party’s redistributive politics were in fact modest—a program to eradicate hunger in Brazil called Zero Hunger, a family-based welfare program called the Family Allowance, and an infrastructure spending program to try to create jobs. But its politics of national sovereignty were ambitious.

It was under Workers’ Party rule (under Lula and his successor, president Dilma Rousseff, who won the 2010 election to become president at the beginning of 2011) that the idea surged of a powerful BRICS (Brazil, Russia, India, China, South Africa) alliance that could challenge the ambitions of the U.S.-led West. Brazil took steps to strengthen its manufacturing, and held its ground on preventing pharmaceutical patent monopolies. Lula’s Brazil accused Western countries of hypocrisy for insisting both on “free trade” with poor countries and farm subsidies for themselves. Brazil even moved in the direction of building an independent arms industry.

Contradictions remained: The Workers’ Party government sent Brazilian troops to command the UN force that enacted the U.S.-impelled occupation of Haiti—treating the world to the spectacle of the biggest, wealthiest country in the region helping the U.S. destroy the sovereignty of the poorest as part of its foreign policy. But in those years Brazil refused to renounce its alliance with Venezuela’s even more independent-minded government under Hugo Chavez; it defended ideas of South-South cooperation, especially within Latin America, and it made space for movements like the Landless Peasants’ Movement (MST).

But after more than a decade of Workers’ Party rule, what happened? President Rousseff was overthrown in a coup in 2016. When polls showed that Lula would have won the post-coup election, he was imprisoned to prevent him from running. And so with the Workers’ Party neutralized, Brazil elected Jair Bolsonaro, a man who famously saluted the American flag and chanted “USA” while on campaign (imagine an American leader saluting the Brazilian flag during a presidential campaign). No doubt the coup and the imprisonment of Lula were the key to Bolsonaro’s rise, and failings like supporting the coup in Haiti played a role in weakening the pro-independence coalition.

But what about the economy? Or Brazil’s leaders now dragging the economy into the U.S. fold? Or did the Brazilian economy drag the country back into the fold?

Brazil’s economic history and geography have made independence a challenge. Colonial-era elites were interested in using slave labor to produce sugar and export as much of it as possible: TheZ infrastructure of the country was built for commodity extraction. Internal connections, including roads between Brazil’s major cities, have been built only slowly and recently. The various schemes of the left-wing governments of the last decade for South-South economic integration were attempting to turn this huge ship around (not for the first time — there have been previous attempts and previous U.S.-backed coups in Brazil), and to develop the internal market and nurture domestic industries (and those of Brazil’s Latin neighbors).

Yesterday’s dependent economy was based on sugar export — today’s is based on mining extraction. When Bolsonaro was elected, the Canadian Broadcasting Corporation quickly posted a story speculating on how the new government would be good for Canadian mining companies. The new Brazilian president plans to cut down huge swaths of the Amazon rainforest. Brazil is to return to its traditional role of providing natural resources to the U.S. and to the other rich countries.

A smaller country with a stronger pro-independence leadership, Venezuela faced similar structural economic problems that have imperiled and nearly derailed the independent-minded late president Hugo Chavez’s dream that Venezuelans would learn to eat arepas instead of hamburgers and play with Simon Bolivar dolls instead of Superman ones. There, too, the pro-independence project had a long-term goal of overcoming the country’s dependence on a single finite commodity (oil), diversifying its agricultural base and internal markets. And there, too, the challenge of doing so proved too great for the moment, especially in the face of an elite at least as ruthless as Brazil’s and nearly two decades of vindictive, pro regime-change U.S. policy. Today Venezuela’s “Bolivarian project” is in crisis, along with its economy and political system.

There are other sleeping giants that remain asleep, perhaps for economic reasons. In the face of relentless insults by Trump, the Mexican electorate chose a left-wing government (Mexicans have elected left-wing governments many times in the past few decades, but elections have been stolen). But locked into NAFTA, dependent on the U.S. market, Mexico also would seem to have little option but to swallow Trump’s malevolence.

Egypt is the Brazil of the Middle East. With 100 million people and a GDP of $1.4 trillion, the country that was for a few thousand years the center of civilization attempted in the 20th century to claim what is arguably its rightful place at the center of the Arab world. But today, this giant and former leader of the nonaligned movement is helping Israel and the U.S. starve and besiege the Palestinians in Gaza and helping Saudi Arabia and the U.S. starve and blockade the people of Yemen.

Egypt stopped challenging the U.S. in the 1970s after a peace deal brought it into the fold for good. Exhaustion from two wars with Israel were cited as the main cause—though a proxy war with Saudi Arabia in Yemen and several domestic factors also played a role. But here, too, is there a hidden economic story?

Egypt has oil, but its production is small—on the order of 650,000 barrels a day compared to Saudi Arabia’s 10 million barrels, or the UAE’s 2.9 million. It has a big tourist industry that brings in important foreign exchange. But for those who might dream of an independent Egypt, the country’s biggest problem is its agricultural sector: It produces millions of tons of wheat and corn, but less than half of what it needs. As told in the classic book Merchants of Grain, the politics of U.S. grain companies have quietly helped feed its power politics all over the world. Most of Egypt’s imported grain comes from the U.S. As climate change and desertification wreak havoc on the dry agricultural ecosystems of the planet, Egypt’s grain dependence is likely to get worse.

The structures of the global economy present challenges to any country or political party that wants to try to break out of U.S. hegemony. Even for countries as big and with as much potential as Brazil or Egypt, countries that have experienced waves of relative independence, the inertia of these economic structures helps send them back into old patterns of extraction and debt. In this moment of right-wing resurgence it is hard to imagine political movements arising with plans to push off the weight of the economic past. But that weight cannot be ignored.

Justin Podur is a Toronto-based writer. You can find him on his website at podur.org and on Twitter @justinpodur. He teaches at York University in the Faculty of Environmental Studies.