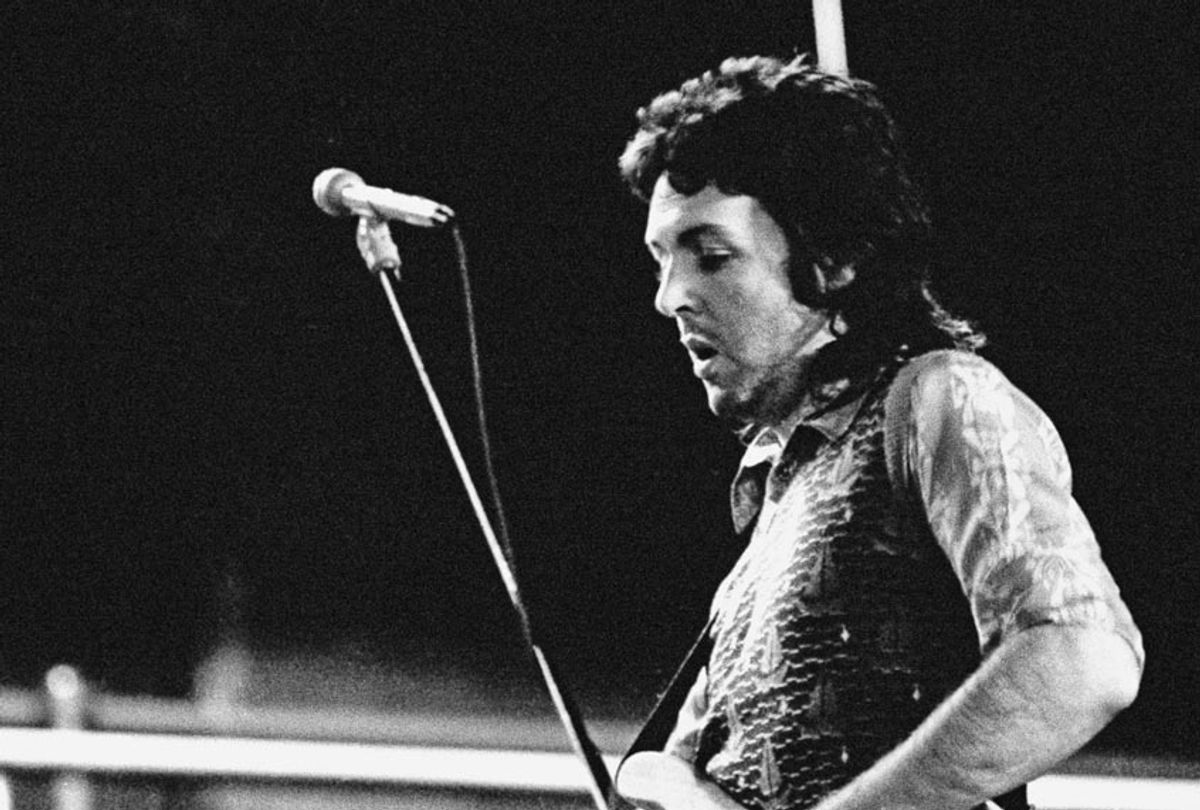 There’s an old joke about a wide-eyed teenager stumbling onto a Beatles LP in a late 1970s record store and exclaiming to her friend, “Did you know that Paul McCartney had a band before Wings?” As witticisms go, it rarely failed to raise a chuckle from Baby Boomers, who fondly remembered the Cute Beatle bouncing and swaying in sheer joy as he kicked off The Ed Sullivan Show with “All My Loving” back in February 1964. For the sons and daughters of The Greatest Generation, it seemed impossible to imagine that anything could reasonably follow on the heels of Beatlemania’s ubiquity. Why even bother trying?

But in the summer of 1971—with two well-received solo albums already behind him—McCartney did just that, daring to step into the fray once more after playing a signal role in pop music’s most famous foursome. That December, he released "Wild Life," his first long-player with his new band Wings, followed by "Red Rose Speedway" in April 1973. Both albums are now being reissued in deluxe editions as part of McCartney’s Grammy-winning Archive Collection.

For many music lovers, the waning days of 2018 might understandably seem like a peculiar time to commemorate McCartney’s risky post-Beatles adventure. Indeed, it is difficult to comprehend the thinking behind the albums’ releases—especially in such close proximity to the Beatles’ White Album remixes and the remastered edition of John Lennon’s "Imagine," not to mention McCartney’s own chart-topping LP "Egypt Station" this past September. What gives, Sir Paul? Why unleash so much product in the marketplace in what feels like one-fell swoop?

While the sudden glut of Beatles-related wares seems perplexing — especially given the fairly exorbitant cost associated with so much “premium” content, when it comes to "Wild Life" and "Red Rose Speedway," the results are surprisingly revelatory. I would even hazard a guess that the most jaded fans might find themselves reconsidering Wings’ odd place in the post-Beatles story—and possibly even in the larger pantheon of popular music.

When it comes to the most cynical listeners among us—the folks who think of Wings as a kind of bubblegum, pseudo-rock band—one need look no further than McCartney himself. As recently as May 2016, the former Beatle was lambasting Wings on a BBC special. “We were terrible,” he bluntly remarked. “We weren’t a good group.” When it came to Wings’ first pair of LPs, McCartney’s vitriol was on full display. “After I heard 'Wild Life,' which was Wings’ first album, I thought, ‘Hell. We have really blown it here.’ And the next one after that, 'Red Rose Speedway,' I couldn’t stand.”

Strangely, McCartney’s easy dismissal of Wings mirrors the record-buying public’s bizarre acceptance—even elevation, at times—of the band. They were the butt of numerous jokes throughout their decade-long tenure and beyond. McCartney’s wife Linda was especially singled out, often maligned for her singing and keyboard-playing abilities after being pressed into service by her husband as a kind of accidental bandmate.

But for all of the animosity about their mere existence, Wings invariably found themselves at the top of the heap during their heyday. From 1971 through 1980, they produced eight Top 10 US LPs, including five chart-toppers. During that same period, the group landed 14 Top 10 singles—six of which captured the number-one spot. Perhaps even more remarkably, all 23 of Wings’ U.S. singles registered Top 40 hits. Over the years, the band won six Grammy Awards, while selling some 14 million records, which was plenty enough to earn seven platinum and nine gold discs along the way.

Why is it, then, that Wings enjoys such a notorious place in the history of 1970s rock—and so much so, that even its band leader acts as one of its most fervent naysayers? The answer may just lie in the outtakes and unreleased tracks included with the deluxe editions of "Wild Life" and "Red Rose Speedway." And as the lost gems featured in the box sets resoundingly demonstrate, the culprit behind Wings’ bizarre emergence in pop culture’s psyche is none other than McCartney himself.

Recorded in scarcely more than a week in the summer of 1971, "Wild Life" was, by any measure, a homespun rush job. The band’s lineup had come together rather quickly, with McCartney on lead vocals and bass, wife Linda doing her damnedest to fake it till she could make it as a keyboard player, ex-Moody Blues singer-songwriter Denny Laine on guitar, and Denny Seiwell, one of McCartney’s Ram sidemen, on drums. The makeshift quartet would mark the beginning of three major lineup shifts over the next several years, with various side musicians clustering around the mainstay nucleus of the McCartneys and the ever-faithful Laine.

With 10 songs, "Wild Life" clocked in just shy of 40 minutes—and as pop-musical ambitions go, it sounded like a trifle, a morsel to be easily digested and just as quickly forgotten. In the reissue edition, the album’s highlights shimmer appropriately. “Some People Never Know” and “Tomorrow”—then and now—are the kinds of rock confections in which McCartney specializes like no other—endearing, emotionally affecting, and eminently well-played. Yet at the same time, there’s simply no amount of varnish that can transform “Bip Bop,” the lumbering title track, or Linda’s lifeless vocal turn on “I Am Your Singer” into the stuff of greatness.

For these reasons alone, the LP was widely ridiculed—and rightly so. But as it happens, Wild Life’s most transfixing moment—the harbinger of even greater things to come—was hidden in plain sight all along. As the album’s penultimate track, “Dear Friend” is a veritable showstopper, a heartbreaking olive branch directed at Lennon, McCartney’s estranged songwriting partner. The two old friends had been engaged in a war of musical words, of sorts, that began with McCartney’s “Too Many People,” which lacerated Lennon’s well-known peace efforts, only to be amped up by ex-Beatle John’s “How Do You Sleep?” which eviscerated the breadth of McCartney’s musical achievements in the space of a single song.

In a December 1971 Cash Box interview, Lennon sloughed off his highly public tussle with McCartney, remarking that “there’s really no feud between me and Paul. It’s all good, clean fun. No doubt there will be an answer to ‘Sleep’ on his next album, but I don’t feel that way about him at all.” As it turned out, Lennon only had to wait a matter of days to experience McCartney’s retort, which arrived in the dark, conflicted strains of “Dear Friend.”

In its original form, the song played like a kind of funeral dirge, with McCartney singing, “Dear friend, what’s the time? / Is this really the borderline?” At just 29-years-old, the composer speaks from a worldly wisdom that belies his age, pondering the encroaching fears and looming responsibilities of adulthood and growing up. With an uncredited orchestral arrangement from Beatles producer George Martin, “Dear Friend” takes on a sense of dramatic power that exists well outside of "Wild Life"’s other, less potent contents. The deluxe box set offers a telling glimpse into McCartney’s songwriting process, complete with early takes of the song that reveal the explosive emotional bedrock that merits the inclusion of “Dear Friend” among the ex-Beatle’s finest work.

Incredibly, "Red Rose Speedway" emerges in an even more impressive light thanks to the album’s deluxe reissue. In his contemporary Village Voice review, vaunted rock critic Robert Christgau didn’t mince any words, deriding "Red Rose Speedway" as “quite possibly the worst album ever made by a rock ‘n’ roller of the first rank.” Although the LP topped the charts on the strength of the number-one spring 1973 single “My Love,” Red Rose Speedway’s contents ultimately collapse under the weight of its own overwhelming saccharine content.

In its original form, Red Rose Speedway was chock full of silly love songs. But as the deluxe edition demonstrates, it didn’t have to be that way. In fact, the LP shouldn’t have been released in that fashion. Originally produced as a double-album, McCartney culled nine cuts from "Red Rose Speedway" in order to afford it with a more commercial feel. But in so doing, he robbed the record of its edginess and heft. It wouldn’t be the last time that McCartney would succumb to his pop-star pretensions. In 1979, he was on the verge of deleting the guitar-oriented effusions from "Back to the Egg," Wings’ swan song, only to be talked out of it at the last minute by producer Chris Thomas, who staged an intervention with no less than David Bowie in an effort to preserve the LP’s refreshing sense of rawness.

But there was no such luck with "Red Rose Speedway." Thanks to the LP’s reissue, fans can now experience the album’s original, harder-rocking sound in such songs as “Best Friend” and “The Mess”—a pair of live cuts from the group’s gritty 1972 early tours. And then there’s the country rock-tinged “I Would Only Smile” and “Mama’s Little Girl,” which would have been equally at home on an Allman Brothers album. With the restoration of the LP’s forgotten other half, "Red Rose Speedway" emerges as a very different record. More important, Wings comes off as a remarkably different band—a versatile group of (mostly) accomplished musicians that was at home in a panoply of genres and styles.

For all of his attendant criticisms of his 1970s band, McCartney has been exceedingly careful to avoid sliding into regret. “Looking back on it,” he recently admitted, “I’m really glad we did it.” But of all people, it was Lennon who understood Wings’ value even more implicitly than its founder ever could. As he observed in one of his final interviews, “I kind of admire the way Paul started back from scratch, forming a new band and playing in small dance halls.” As much as anyone, Lennon perceived the sheer amount of risk inherent in creating a band out of whole cloth in the wake of the Beatles’ juggernaut. With the "Wild Life" and "Red Rose Speedway" reissues, the realization of McCartney’s triumph with Wings finally comes into full view.