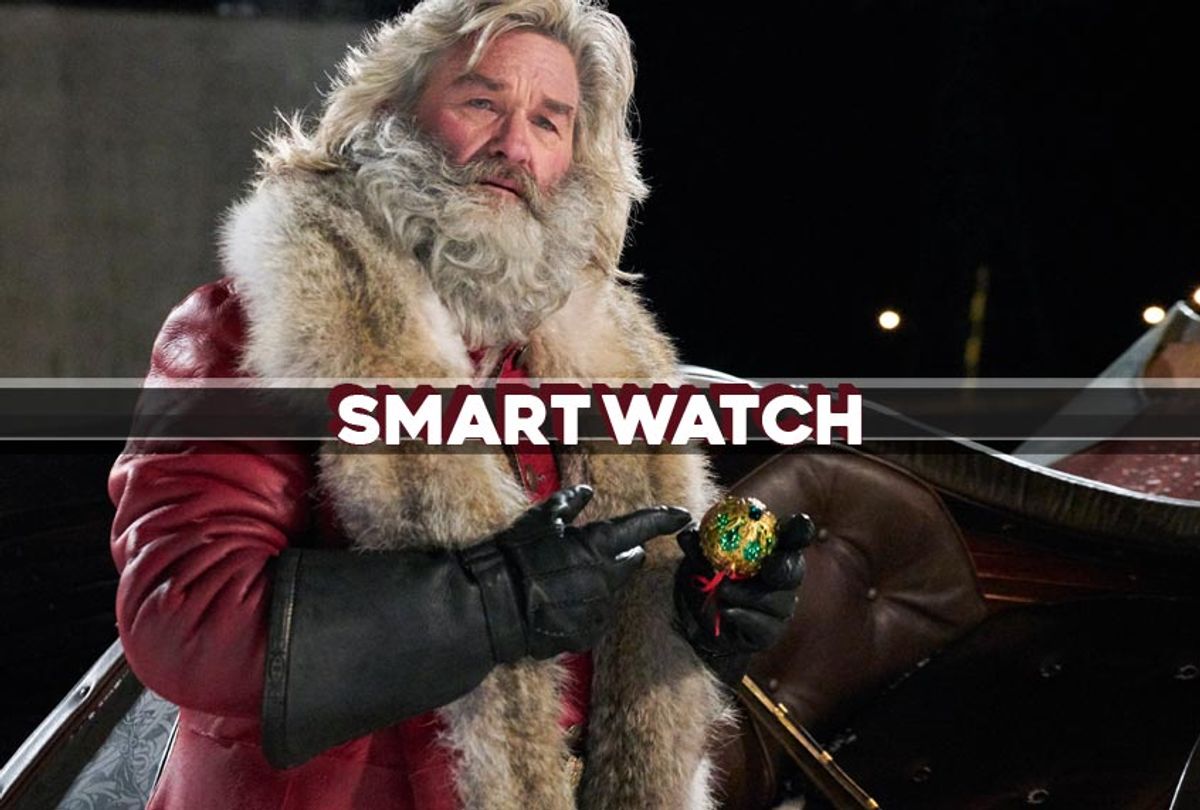 From garden variety Santaphilia to Megyn Kelly’s confident insistence that “Santa just is white . . . that's a verifiable fact,” everybody claims a very specific vision of the man, the myth, the legend, as the correct one. Typically he’s white-bearded and jolly, and extraordinarily quick despite having that “round belly/that shook when he laughed, like a bowl full of jelly,” as Clement Clarke Moore famously put it.

From there the image diverges. Is he short? Tall? Black? Brown? Is his beard ZZ Top-long or close-clipped? The answer is yes, who knows, and for many tired adults, who cares.

But we do not picture Kurt Russell. Why would we? Millions of us are conditioned as young children to accept that sitting on an old stranger’s lap is a rite of passage valuable enough to line up for. And that stranger doesn’t look like Snake Plissken, or truck drivin’ Jack Burton from “Big Trouble in Little China.” In fact the only person we picture sitting on that lap is Goldie Hawn or, before he got together with her, post-apocalyptic strippers.

Therefore, you’ll have to forgive a person for underestimating the believability of Kurt Russell as Santa Claus in Netflix’s “The Christmas Chronicles.” I mean, think about it: Purely based on his physique, Russell does not present as a child-friendly saint. This is a guy we’re used to seeing at his sweatiest, growling and clocking dudes in the face or behaving like a cosmic douche, as he did in “Guardians of the Galaxy Vol. 2.”

Fat and jolly he ain’t. Well-preserved? You bet. This is a guy who has passed up many, many plates filled with cookies over the course of his 67 years.

Russell’s performance takes nothing away from previous Saint Nicks, such as Ed Asner’s gruff and tender turn in 2003’s “Elf” or, going way back in time, Edmund Gwenn’s timeless performance in 1947’s “Miracle on 34th Street.”

But somehow his Santa works, and he works it, and the fact that this is coming from a person who associates Santa with mall guys who smell like sausage cured in a crawlspace should tell you something. Russell’s Santa probably doesn’t smell like peppermint either, but he’s rough around the edges in just the right proportion to envision the guy being partial to a good quality bay rum.

Yes, Russell’s Santa is the one 2018 needs and deserves.

Granted, “The Christmas Chronicles” itself is a fairly paint-by-numbers Yuletide dreck, in which two children enjoy an adventure with the Big Man on The Night Before Christmas.

None of its actors are going to remembered for turning in challenging or career defining performances, although Darby Camp and Judah Lewis refrain from stumbling into grating or annoying territory. They play Kate and Teddy, a pair of bickering siblings who sneak onto Santa’s sleigh since their mom (Kimberly Williams-Paisley) has to work the overnight shift on Christmas Eve.

For those keeping count, that’s two boxes checked on your Christmas special bingo card: dysfunctional family relationships and an absentee parent. There’s also a dead dad (Oliver Hudson) who was around for long enough in the kids’ lives for them remember him and act out in reaction to his absence.

And of course, there’s the imminent danger of Teddy losing his Christmas spirit altogether. The whole movie, in fact, feels like an extensive derivation of the climactic scene in “Elf” when Santa is grounded in Central Park and nearly discovered, but saved at the last moment by an influx of Christmas cheer.

Plus, the North Pole elves assisting Russell’s Santa resemble a cross between kittens and the mogwai from “Gremlins.”  But the call-backs work in its favor as far as that goes. We remember those movies with fondness and value the cheer they bring enough to make viewing them part of our holiday repertoires.

And perhaps Russell’s version of Kris Kringle is enough to justify repeat viewings, even if only for as long as it takes to watch him kicking out a jailhouse jam with Little Steven Van Zandt and the Disciples of Soul. The film’s no great shakes, but Russell’s star power in “The Christmas Chronicles” is a gift anyone should be happy to claim.

“The Chilling Adventures of Sabrina”: “A Midwinter’s Tale,” Netflix

On the other side of the Santa conversation is the cult-like love affair for the anti-Santa, which in some traditions manifests as Krampus. Such a villain pops up in the holiday episode of “The Chilling Adventures of Sabrina,” Netflix’s gruesome contribution to the Archie (and "Riverdale") universe and one of the better female-empowerment narratives to grace TV in 2018.

In “A Midwinter’s Tale,” the evil holiday figure pops up mostly to give Sabrina’s friend Susie (Lachlan Watson) another challenge to survive. It’s always something with that one: If she’s not dodging bullies, she’s struggling to survive a demon fond to trapping the souls of children in wax.

“Sabrina” is one of fall 2018’s most pleasurable surprises, intelligently interrogating the nature of evil, what free will actually looks like and whether it’s possible to be good while adhering to a faith centered upon the Prince of Darkness.

Throughout the season Kiernan Shipka’s half-human, half-witch heroine fights to remain connected to her human life. But when an apocalyptic adversary surfaces, she shockingly signs away her soul, and the majority of her connection to her friends, in order to save them. This incredible reversal occurs at the climax of the season finale, and the fact that “A Midwinter’s Tale” skips lightly through a standalone monster battle starring a mythological Yuletide figure known as Gryla without acknowledging the significance of that development marks this episode as a bonus episode, something extra as opposed to extraordinary or necessary.

Three major occurrences takes place: the first involves the surprising return of a family member, the second the questionable departure of another, and the third a reveal that could haunt the second season, but doesn’t feel game-changing.

This also makes a person contemplate the relative dearth of necessary seasonal special episodes lately. This is not to say we’re put off by Netflix’s gift; as with any series super-fans, “Sabrina” diehards are likely to find more sweetness than misery in this under-cooked detour to celebrate the solstice. For everyone else, there’s the joy in waiting for Season 2 to finish baking.