Smart Watch: "Chilling Adventures of Sabrina" on Netflix, "The Woman in White" and more

Top TV picks this week: Three stories about darkness, and one about working to find the light 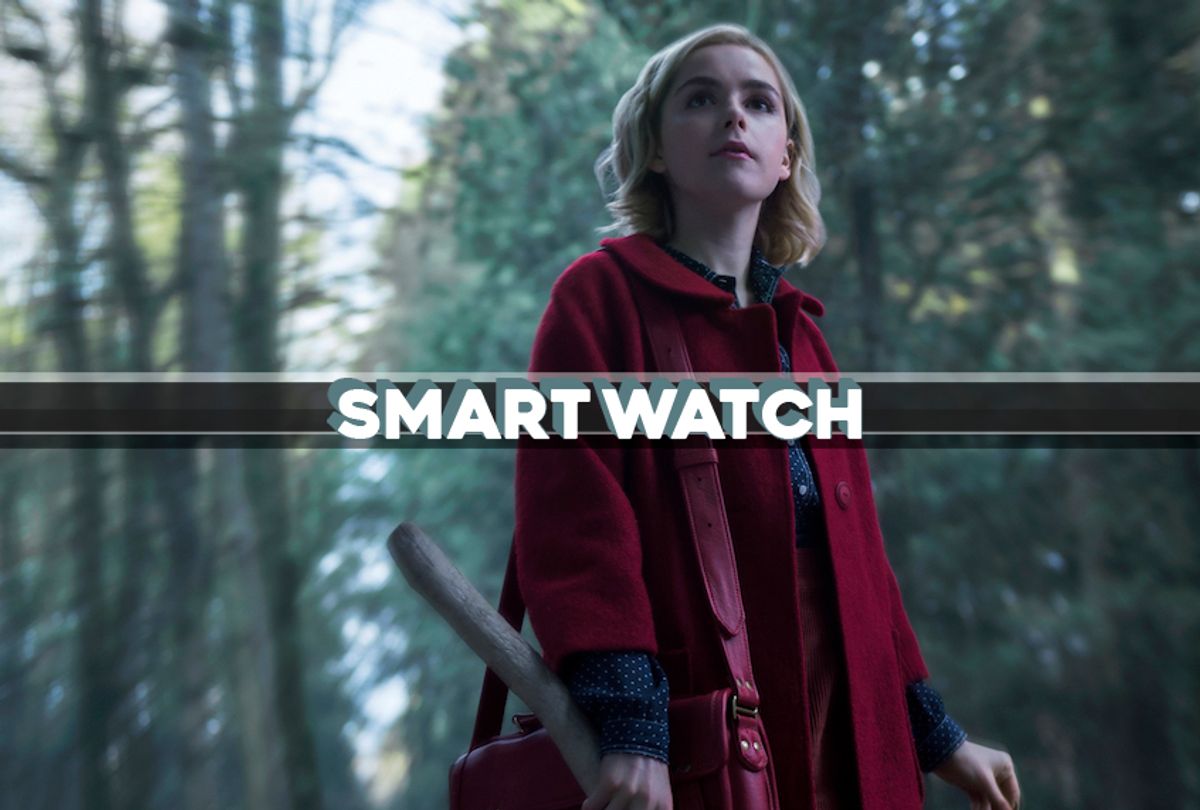 Fans of the CW's "Riverdale" and AMC's departed "Mad Men" have been anticipating the release of "Chilling Adventures of Sabrina," the reimagining of the Archie Comics teen witch story created and written by "Riverdale" showrunner (and Archie Comics chief creative officer) Roberto Aguirre-Sacasa since Kiernan Shipka, who honed her dramatic chops in her critically acclaimed run as Sally Draper, was announced to star. Netflix will release all 10 episodes of Season 1 on Friday, Oct. 26.

The first episode establishes dramatic stakes for half-witch, half-human Sabrina Spellman, who has a major life choice to make as her 16th birthday rapidly approaches: commit herself to the world of witchcraft and renounce her ties to the human world, or stray from her heritage and become mortal. One big problem: Sabrina's torn between her two identities, and feels equally at home in both the world of her supernatural family — she lives in a mortuary with her witch aunts, nurturing Hilda (Lucy Davis) and haughty Zelda (Miranda Otto), plus her warlock cousin Ambrose (Chance Perdomo) — and that of her tight-knit, quirky group of high school humans, which includes her boyfriend Harvey (Ross Lynch). While her family pressures her to embrace her future, the witchy mean girls who "don't want half-breeds at the Academy" torture Sabrina with an unsettling revelation, and a body in the mortuary hints at darker times ahead for Greendale.

While "Riverdale" fans know Greendale is just down the road, the first episode of this iteration of "Sabrina" — not at all to be confused with the '90s-kid Melissa Joan Hart version — feels like a world apart, despite sharing a creator and Archie Comics DNA. While "Riverdale" applies a tongue-in-cheek teen-soap sheen to its story about an archetypal town that harbors dark violent secrets within its all-American families, "Chilling Adventures of Sabrina" feels paradoxically more innocent and more adult. The opening episode sets up Greendale as a dangerous place immediately  — the camera doesn't turn away from a violent murder in the first ten minutes — but its darkness is also seductive. The series promises to be a fitting showcase for Shipka's considerable talent, as her Sabrina balances strength and vulnerability — earnestly and conflictedly in love with the world, justice, and with her own nascent powers — with inimitable style.

"Roseanne" after Roseanne debuted earlier this week, and "The Conners" spent its premiere showing the family dealing with raw grief over their matriarch's death and the revelation that opioids killed Roseanne, not a heart attack as they had thought. The premiere didn't settle much about how the show would proceed in the wake of its star and creator's forced departure, but starting Tuesday, the Conners will move on to their new normal, in which they attempt to find daily light, and a new way forward, from within the darkness of their grief.

With the addition — at least for as long as she's on leave — of DJ's wife Geena and already-announced additions Juliette Lewis and Matthew Broderick, the familiar cast is getting an infusion of new life for its new run, too.

This haunting period thriller is the latest adaptation of Wilkie Collins' 1859 novel, widely considered one of the first pieces of mystery fiction published. In the first of the miniseries' five parts, which premieres Sunday night, a promising young London-based painter of humble means, Walter Hartright (Ben Hardy), is hired to work on the collection of an imperious land owner on a rural estate while tutoring his nieces. The night before his departure, Walter has an unsettling encounter with an agitated young woman dressed all in white — not unlike a ghost — in Hampstead Heath who indicates her familiarity with the estate to which he's headed.

When he arrives at Limmeridge House the next day, he's startled to find one of the nieces, the beautiful heiress Laura (Olivia Vinall), dressed similarly and looking very much like, though not identical to, the mysterious woman in white. With the help of her (not rich) half-sister, the resourceful and tomboyish Marian (the captivating Jessie Buckley), Walter begins to unravel the mystery of the young woman and how she relates to the estate and the family's cache of secrets, while growing closer to Laura, whose future has already been decided — and may turn out to be a grim fate indeed.

"The Woman in White" will unfold over five weeks into a race against time to discover the secrets that can set the young women and Walter free before the forces conspiring against them can triumph. Though set in the 19th century, it offers a timely indictment of cultural forces that privilege powerful men at the expense of women to this day. As Marian says to a solicitor in the beginning of the first episode, “How is it that men can crush women time and time again and go unpunished?" Good question, Marian, and thank you for asking. "If men were held accountable they’d hang every hour of the day, every day of the year," Marian continues, offering a vision of an alternate future that isn't likely to materialize any time soon.

The second season of "Making a Murderer" premiered Friday on Netflix, and the first four episodes of Moira Demos and Laura Ricciardi's follow-up to their runaway 2015 hit docuseries covers the negative public reactions to the initial series investigating possible corruption in the convictions of Steven Avery and Brendan Dassey for the 2005 murder and rape of Wisconsin woman Teresa Halbach, as well as the attempts by new legal teams to have the convictions overturned. The standout new personality is Avery's new defense attorney Kathleen Zellner, who specializes in overturning convictions, who begins to pick apart, piece by piece, the state's physical evidence against Avery, which the series had cast as suspicious from the end of its first episode. Zellner is compelling TV all on her own, and her scenes crackle with an energy that's missed in the more procedural segments, as well as in the somewhat slow visits to Avery's and Dassey's families as they grapple with their sons' incarceration. Her relentless forensic counter-testing will give "Making a Murderer" obsessives plenty to debate once again. Read Salon's review here.