What story would Charles Dickens tell this Christmas if he visited New York City in Trump's America? 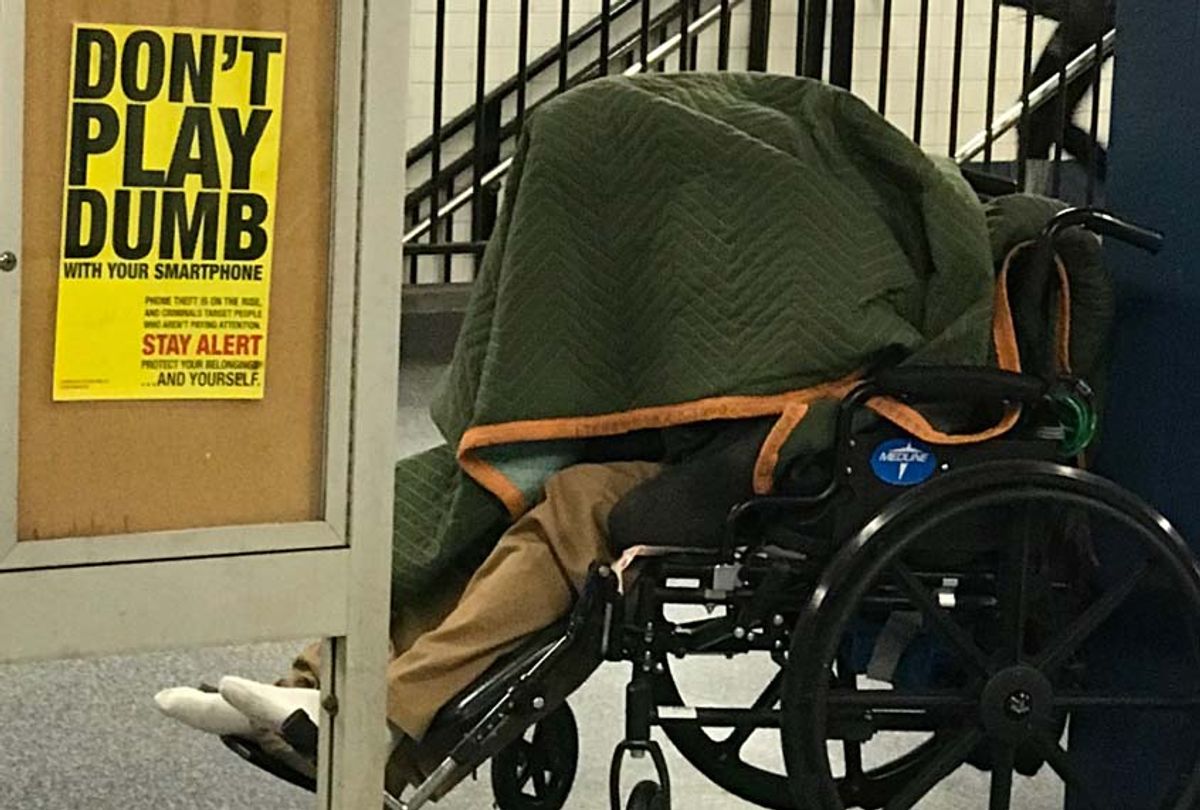 2018 XMAS Time In NYC- The subway offers a warm sanctuary to the record number of tens thousands of homeless people in various states of deteriorating health who move about in the margins mostly ignored. (Bob Hennelly)
--

It is 176 years since Charles Dickens, the journalist, social reformer and novelist, was horrified by the depth of poverty when he came to visit the Five Points Section, of “Gangs of New York” fame, in lower Manhattan.

Today, Dickens would find a relatively gentrified but stratified Manhattan, where according to the United Way over a third of the residents live in poverty or struggle week to week. On Staten Island, the non-profit estimates the middle class is barely holding on, with 44 percent of households either in poverty or one unexpected expense away from difficult choices.

In Brooklyn, it is just over half that are struggling, with 51 percent living below the poverty line or check to check. In Queens it is 57 percent. While in the Bronx almost three quarters of the families struggle to varying degrees to cover shelter and the basics.

New York City’s deepening crisis in affordability manifests itself in the ranks of 63,000 homeless people, including close to 16,000 families with 23,136 children, according to the Coalition For the Homeless.

This Christmas season, just blocks away from what was Five Points, at the Chamber Street Subway Station, the homeless, many of them in bad physical condition, sit for hours seeking sanctuary from the winter cold. One elderly homeless man was reduced to shuffling along, with a plastic bag on one foot so as to keep dry open sores on one foot. Another sat in a wheelchair with his entire upper body covered with a blanket in the midst of the morning rush hour.

According to Dickens biographer Robert McNamara, the British novelist  wrote the “Christmas Carol” as a “protest” because he felt “a strong need to comment on the enormous gap between the rich and poor in Victorian Britain.”

In 21st century New York City, while tens of thousands are without shelter one survey found close to 75,000 apartments are vacant listed as in "seasonal, recreational, or occasional use.”

For years New York City, which is the rookery where Wall Street’s vulture capitalists roost, has drawn billions of dollars of ‘hot’ money that’s invested in luxury housing for the world’s dictators and global miscreants.

If Dickens was agitated by the wealth inequality in his own time and place, can you imagine what he might say about both the unprecedented income disparities that exist in America as a whole and in New York particularly?

Research by economists Peter Lindert and Jeffrey Williamson indicates that there’s no historic precedent for America’s rapidly widening income inequality. Indeed, based on their research, the current inequality may eclipse the level that in Victorian England Dickens railed against.

A constant theme throughout Dickens work is his critique of the “Poor Laws” which had as their goal making the process of getting general welfare and support so onerous and miserable that it would discourage people from applying.

Be sure Dickens would find a 21st century New York that hates its poor as well.

Consider the video shot this week of  23 year-old Jazmine Headley, a working mom who had come to a local welfare office to get a day-care voucher for her one year old son so she could go to her job as a cleaner.

Not finding a seat to sit down on, she sat on the floor with her son waiting her turn. That act of ‘defiance’ got her into a dispute with the security guard which escalated into armed New York City Police Officers arriving on the scene and tearing her one year-old son from her arms and taking her off to jail.

Those charges were dropped by the District Attorney who was horrified by the video that went viral.

And while both New York State and the Federal government can be faulted for cutting funding, it was the municipality that let the tenants down the worst. Only when the de Blasio administration was caught lying about the lead inspections did the Department of Justice step in and force the city to commit to improving conditions and greater federal oversight.

This is the local socio-economic context that’s missing from the red-hot debate over Governor Andrew Cuomo and Mayor Bill de Blasio’s decision to give Amazon almost $3 billion in state and city support.

The Governor and the Mayor’s race to satisfy the trillion-dollar corporate behemoth’s greed is reflexive for our post-modern professional political class who spend so much of their energy raising millions to feed what has become a perpetual campaign machine.

When you have to raise that kind of money, just to get or keep a job, your sense of rational proportionally can’t help but be skewed. You know you have to raise many multiples of what you’ll make in a salary. You got to be a gambler on some level to play in this league of electoral politics.

Their political rhetoric references the poor and the working class; yet politicians' rolodexes are all about cultivating the one percent.

We've been doing this kind of economic development for years and the results are in. The big corporations get bigger and the wealth gets increasingly concentrated to the disadvantage of the 99 percent.

What side of the Amazon debate do we think Dickens would be on?