Trump claims to hate "SNL," but it's also clear that he can't stop watching 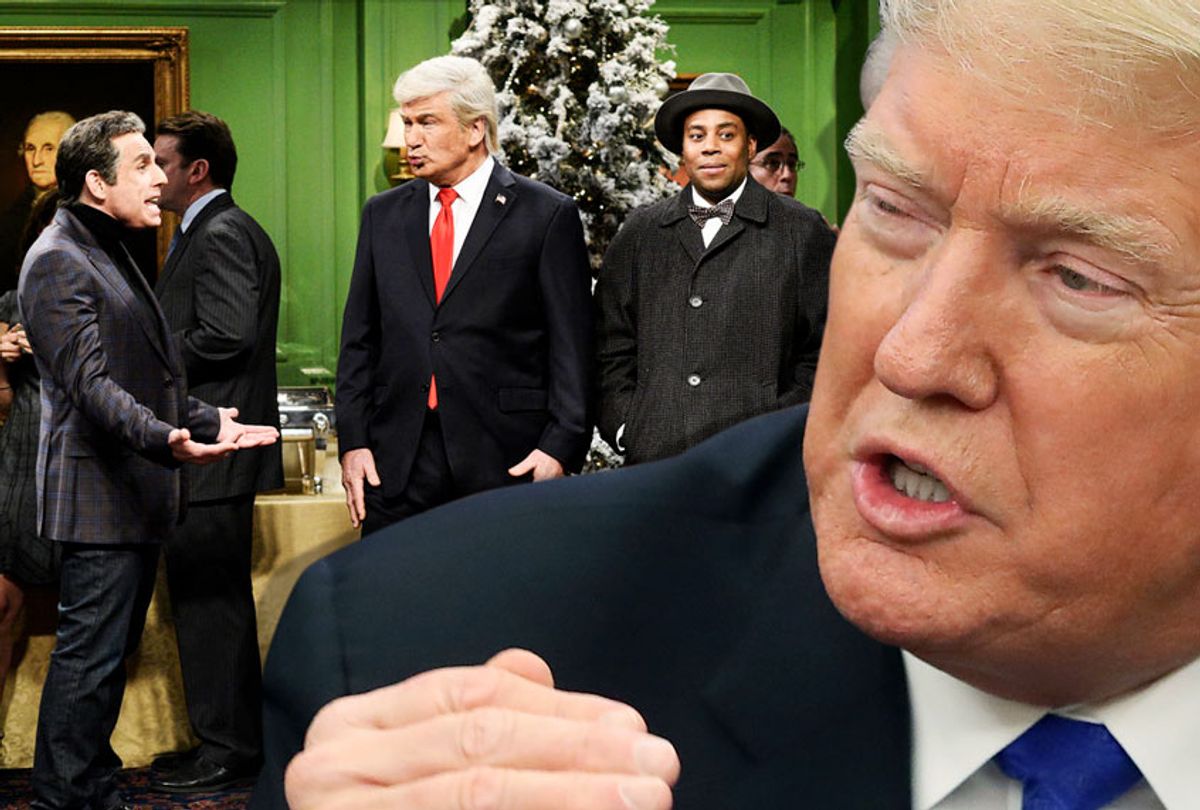 President Donald Trump is threatening to sue NBC and “Saturday Night Live” after the show's parody of the Christmas classic “It’s A Wonderful Life” last weekend imagined a world where Trump was never elected president.

“A REAL scandal is the one sided coverage, hour by hour, of networks like NBC & Democrat spin machines like Saturday Night Live. It is all nothing less than unfair news coverage and Dem commercials,” the president tweeted Sunday morning. “Should be tested in courts, can’t be legal? Only defame & belittle! Collusion?”

Weekend Update segment also opened with Colin Jost saying "this week has been a pretty bad year for Donald Trump," and listed the litany of legal woes facing the president in what he called "Impeachment Bingo." Jost and co-host Michael Che then tore into the president and Michael Cohen over their ongoing legal issues.

Many people reminded the president that "SNL" and its jokes are absolutely protected under the First Amendment, and pointed out that the sketch comedy show has made fun of literally every president since Gerald Ford, who was in office when the show launched in 1975. Trump should know how "SNL" works; he's hosted twice, the last time just three years ago during his presidential campaign. Appearing on Nov. 7, 2015, in his signature ill-fitted suit, he said in his monologue, "Many of the greats have hosted, as you know, this show, like me, in 2004."

So what is this really about, besides Trump's goal to use "collusion" to refer to as many creative scenarios as possible other than his presidential campaign? His disdain for media isn't new, of course. Trump has spent the last several years dismissing any non-glowing news coverage as "fake news" and most non-Fox News media entities as "enemies of the people." But a sketch comedy show isn't the news media, no matter how many Americans have used Comedy Central as a new source in the past.

Despite the president's ongoing claims that the show is "unfunny" and "boring" and Alec Baldwin's impression is "terrible," Trump still appears to follow "SNL" with the devotion of a lifelong fan. Does Trump feel a heightened sense of disappointment from not being adored by the show that's still the most relevant pop cultural commentary show on TV? Especially one he admired enough to appear on more than once in the past, and can't seem to quit watching no matter how sharply he's skewered?

Last weekend's "It's A Wonderful Life"-style cold opening sketch seems to have hit a chord. In the sketch, even Trump (Baldwin), appears happier imagining a version of the world where he's not in charge. As his guardian angel (Kenan Thompson) assures him, “You can still say the same stuff, ‘build the wall,’ ‘bring back coal,’ but you don’t have to deal with the fact that all your ideas are impractical or insane.”

What else would be different in a non-Trump administration, according to "SNL"? Kellyanne Conway would be on speaking terms with her husband, for starters. Sarah Huckabee Sanders would make a killing in PR, spinning stories for companies like Facebook and the Romaine Lettuce Association. Michael Cohen (Ben Stiller) wouldn't be a convicted criminal on his way to prison. Melania would get a divorce. Mike Pence would embrace his true passion for EDM music and become a DJ. Brett Kavanaugh (Matt Damon) wouldn't become a Supreme Court justice, but he would still love beer. Robert Mueller (Robert De Niro) would actually get to spend some quality time with his grandson. And Hillary Clinton would be president, all her private emails turning out to be nothing more than Bed Bath & Beyond coupons.

But apparently Trump wasn't laughing. The president's gripes with "SNL" go back to before he won the election — but after he guest-starred in 2015 — when he lumped the sketch comedy show into an alleged broader media conspiracy against his presidential campaign.

Trump has expressed ongoing irritation at Baldwin's imitation, too. "Alec Baldwin, whose dying mediocre career was saved by his terrible impersonation of me on SNL, now says playing me was agony," the president wrote in March. "Alec, it was agony for those who were forced to watch. Bring back Darrell Hammond, funnier and a far greater talent!"

The public is used to Trump's notorious sensitivity to negative coverage by now, comedic or otherwise. But there's still something disturbing about the president of the United States threatening to use the resources and power of the government to settle a score with a TV show, even if his intimidating comments are just empty bluster.

As The Week reported, U.S. courts hold a high standard for defamation, and freedom of expression under the First Amendment broadly allows criticism of anyone, leaders included. But there still could be chilling consequences from Trump's constant warnings of legal action against anyone who challenges or satirizes him:

"Even if the president's threats amount to nothing, individuals and companies fear the government's awesome power enough that they might decide poking fun at the president isn't worth the risk: When a president threatens censorship — and that's precisely what Trump is doing — the chances of self-censorship go up," The Week added. "The president is trying to bully a notable critic into silence: NBC and Saturday Night Live can probably take the pressure, but what about an individual or a publication that doesn't have access to the same powerful lawyers and deep pockets?"

If anything, Trump's tweets (and actions) continue to show his blatant disregard for the law and Constitution, the two things that conservatives are supposed to hold near and dear.

Dennis wasn't alone in expressing his displeasure with the president's threat. Rep. Ted Lieu (D-CA) compared Trump to Nixon, who also famously warred with the press:

As the last two years have proven, it can be hard to keep up with every dangerous thing that the Trump presidency has ushered in. Even among this weekend's tweets, his "SNL" legal threat is less jaw-dropping than, say, the president using mob lingo to call out Michael Cohen or claiming he may intervene in the case of an admitted murderer. But Trump has made clear that he feels he and his cohort are above the law and that he believes himself to wield wide power to interfere in judicial proceedings he doesn't like. With a conservative majority on the Supreme Court, the lines of government feel particularly murky.

Perhaps as a compromise, "SNL" should just invite Trump back on. We all know he'd accept in a heartbeat.