Trump says he's open to a pardon of Paul Manafort: "I wouldn’t take it off the table" 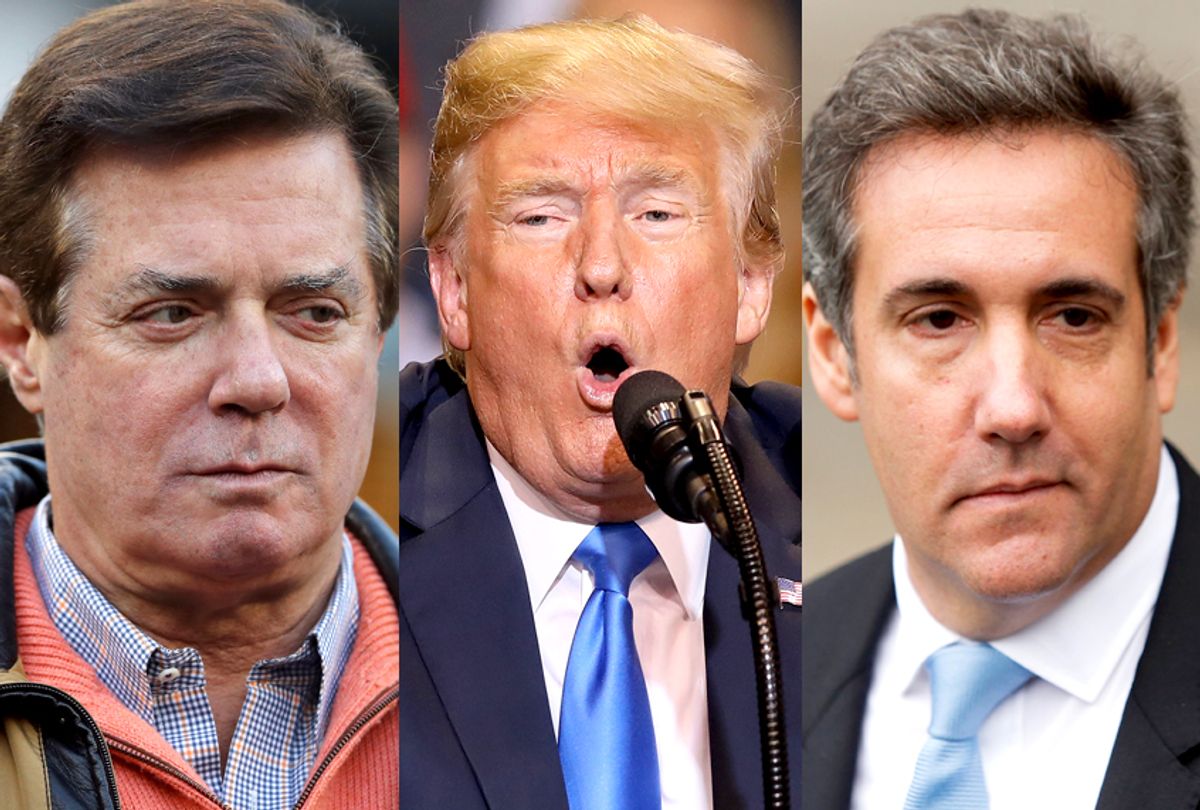 The president has been talking to reporters about Robert Mueller all week, but he made news on Wednesday when he told the New York Post that a pardon for his former campaign chairman is “not off the table.” Hours later, his former personal lawyer Michael Cohen appeared in federal court to plead guilty on charges of lying, seemingly cooperating with Mueller's investigation.

On Monday, more than two months after Paul Manafort agreed to cooperate with special counsel Bob Mueller's investigation into Russia's involvement in the 2016 election, prosecutors revealed that he has “committed federal crimes by lying to the Federal Bureau of Investigation and the Special Counsel’s Office on a variety of subject matters, which constitute breaches of the plea agreement.”

Trump’s lawyer Rudy Giuliani told the Post that Trump "is not going to pardon [Manafort] necessarily, but he is going to consider it and not give up his right to.”

Trump's virtual offer to help out his old friend with a possible presidential pardon appears to be on the verge of obstruction of justice, according to former FBI special agent Asha Rangappa.

President Trump refused to go on the record when asked about special counsel Mueller during a lengthy interview with The Washington Post earlier this week. When reporters Philip Rucker and Josh Dawsey asked the president about Mueller's decision to revoke his plea deal with Manafort, Trump responded: "Let me go off the record because I don’t want to get in the middle of the whole thing." He subsequently refused to go back on the record to share his thoughts on the matter with Mueller and Manafort.

But another former close confidant of Trump's, his former personal lawyer Michael Cohen, appears to still be cooperating with Mueller's investigation. In a surprise move on Thursday, Cohen pled guilty to making false statements during the Russia probe. He is due for sentencing on Dec. 12.

Earlier in the conversation, he doubled down on his theory that wildfires can be prevented with raking, defended his weak response to Saudi Arabia's assassination of a Washington Post journalist, and attempted to lay blame for his inability to build a border wall between the United States and Mexico on Democrats in Congress.

"I think that’s been shown better than ever in the last short period of two weeks — that we need a wall," Trump told the Post. "I see the Democrats are going to want to do something because they understand too. Those pictures are very bad for the Democrats. We’re not having a wall because of the Democrats. We need Democrat votes to have a wall. Now, if we don’t get it, will I get it done another way? I might get it done another way. There are other potential ways that I can do it. You saw what we did with the military, just coming in with the barbed wire and the fencing, and various other things."

The president also reiterated his skepticism toward man-made climate change, even as he refused to back down from controversial comments made earlier this month which implied that California's deadly wildfire was caused by a lack of raking.

"If you go back and if you look at articles, they talked about global freezing, they talked about at some point the planets could have freeze to death, then it’s going to die of heat exhaustion. There is movement in the atmosphere," Trump told the Post. "There’s no question. As to whether or not it’s man-made and whether or not the effects that you’re talking about are there, I don’t see it — not nearly like it is. Do we want clean water? Absolutely. Do we want clean air to breathe? Absolutely. The fire in California, where I was, if you looked at the floor, the floor of the fire, they have trees that were fallen, they did no forest management, no forest maintenance, and you can light — you can take a match like this and light a tree trunk when that thing is laying there for more than 14 or 15 months. And it’s a massive problem in California."

He added, "Josh, you go to other places where they have denser trees — it’s more dense, where the trees are more flammable — they don’t have forest fires like this, because they maintain. And it was very interesting, I was watching the firemen, and they’re raking brush — you know the tumbleweed and brush, and all this stuff that’s growing underneath. It’s on fire, and they’re raking it, working so hard, and they’re raking all this stuff. If that was raked in the beginning, there’d be nothing to catch on fire. It’s very interesting to see. A lot of the trees, they took tremendous burn at the bottom, but they didn’t catch on fire. The bottom is all burned but they didn’t catch on fire because they sucked the water, they’re wet. You need forest management, and they don’t have it."

The president also attempted to downplay recent bad news in the stock market as well as an announcement by General Motors that they are closing some of its plants and laying off their workers.

"No, no, but we have plants moving in, too. We do," Trump protested. He later argued that he wasn't worried about an impending recession because "the trade deals take a little time. The fact is, I think — I disagree with the Fed. I’ve been open about that. I think the Fed is a much bigger problem than China. I think that China wants to make a deal very badly. I think we’ll either make a deal or we’ll be taking in billions and billions of dollars a month in tariffs and I’m okay with either one of those two situations. But I can tell you that China wants to make a deal. I can tell you that other countries want to make deals because they know that I’m not playing around. The USMCA was a very well-received deal. That got done, and a lot of people said it wouldn’t get done. We’re making great trade deals. We lose $800 billion a year with trade."

Finally, the president continued to defend his refusal to take a hard-line stand against Saudi Arabia for ordering the killing of journalist Jamal Khashoggi by arguing that they are economically beneficial to the United States.

"In the end, though, they’re spending massive amounts of billions of dollars. If you look at Iran and what they do, and you look at many other countries — I don’t have to embarrass other countries by saying it — if you look at what they do, it’s a rough part of the world. It’s a dangerous, rough part of the world. But they’ve been a great ally. Without them, Israel would be in a lot more trouble. We need to have a counterbalance to Iran. I know him. I know him well, the crown prince. And, by the way, never did business with them, never intend to do business with them. I couldn’t care less. This is a very important job that I’m doing right now. The last thing I care about is doing business with people. I only do business for us. Somebody said, well, maybe they’re an investor in one of his jobs. The answer is no. But I just feel that it’s very, very important to maintain that relationship. It’s very important to have Saudi Arabia as an ally, if we’re going to stay in that part of the world. Now, are we going to stay in that part of the world? One reason to is Israel. Oil is becoming less and less of a reason because we’re producing more oil now than we’ve ever produced. So, you know, all of a sudden it gets to a point where you don’t have to stay there," Trump replied.