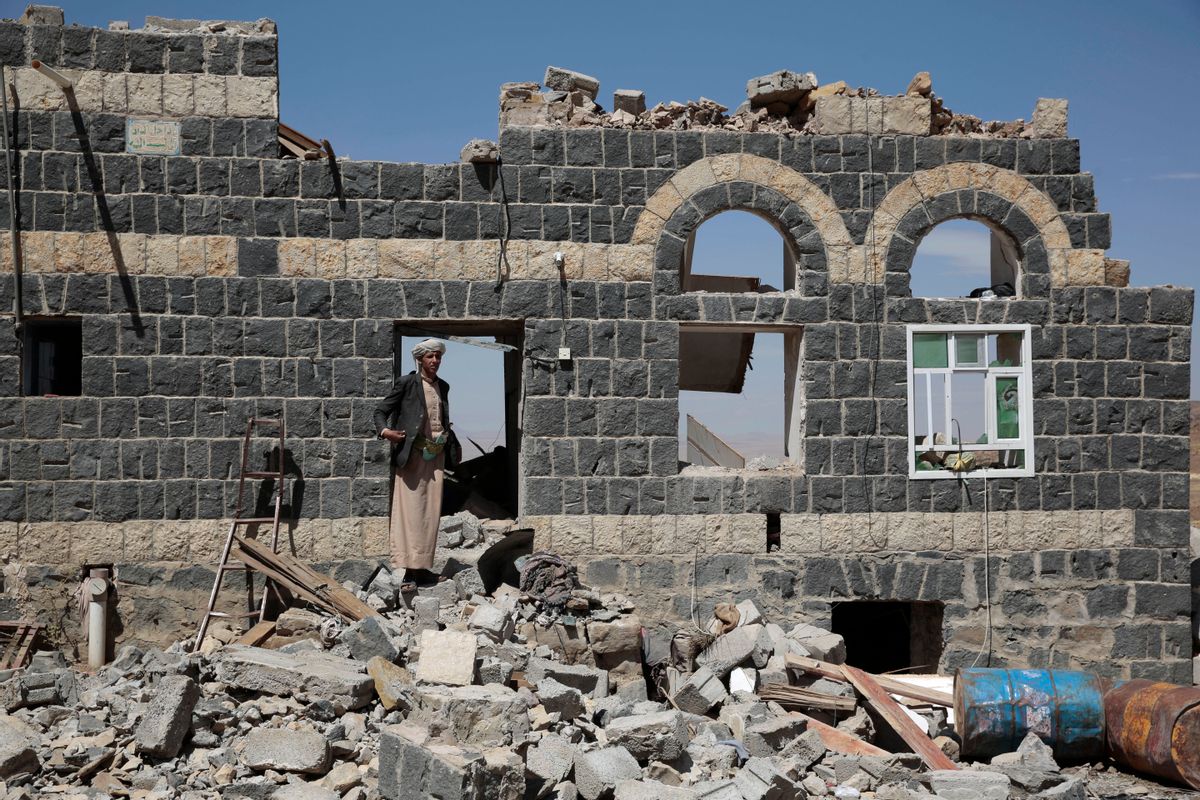 A man stands on the rubble of a house destroyed by a Saudi-led airstrike in the outskirts of Sanaa, Yemen, Thursday, Feb. 16, 2017. At least one Saudi-led airstrike near Yemen's rebel-held capital killed at least five people on Wednesday, the country's Houthi rebels and medical officials said. (AP Photo/Hani Mohammed) (AP)
--

U.S. tax dollars are supporting Saudi Arabia’s war in Yemen, which has already claimed the lives of some 85,000 children, and 12 million more people are likely on the brink of starvation. As Nicholas Kristof wrote in The New York Times, “the starvation does not seem to be an accidental byproduct of war, but rather a weapon in it.”

The United States has long been a staunch ally of Saudi Arabia, and both the Obama and Trump administrations have provided considerable military support to the Saudi war in Yemen.

But Saudi Crown Prince Mohammed bin Salman’s involvement in the torture and murder of journalist Jamal Khashoggi has finally spurred both Democrats and Republicans to take steps to end U.S. military involvement in Yemen.

On November 28, the Senate voted 63-to-37 to advance a resolution that would direct the removal of U.S. Armed Forces from hostilities in Yemen. However, S. J. Res. 54 carves out an exception for continued U.S.-supported military measures against “al Qaeda or associated forces” that could be twisted to rationalize nearly any military assistance Donald Trump provides to Saudi Arabia in Yemen.

Senators plan to debate S. J. Res. 54 this week. The bipartisan resolution, introduced by Sen. Bernie Sanders (I-Vermont) with 18 co-sponsors, invokes the War Powers Resolution. Enacted by Congress in the wake of the Vietnam War, the War Powers Resolution permits the president to introduce U.S. Armed Forces into hostilities or imminent hostilities only after Congress has declared war, or in “a national emergency created by attack upon the United States, its territories or possessions, or its armed forces,” or when there is “specific statutory authorization.”

The War Powers Resolution defines the introduction of U.S. Armed Forces to include:

… the assignment of members of such armed forces to command, coordinate, participate in the movement of, or accompany the regular or irregular military forces of any foreign country or government when such military forces are engaged, or there exists an imminent threat that such forces will become engaged, in hostilities.

S. J. Res. 54 states, “activities that the United States is conducting in support of the Saudi-led coalition, including aerial refueling and targeting assistance, fall within this definition.”

Donald Trump has pledged to veto the resolution, denying that U.S. forces are involved in “hostilities” for purposes of the War Powers Resolution. On November 28, the Trump administration issued the following Statement of Administrative Policy:

After stating that U.S. Armed Forces “assist in aerial targeting and help to coordinate military and intelligence activities,” S. J. Res. 54 cites Defense Secretary James Mattis’s December 2017 statement: “We have gone in to be very – to be helpful where we can in identifying how you do target analysis and how you make certain you hit the right thing.” U.S. targeting assistance enables the coalition to kill Yemenis more efficiently.

Nevertheless, tens of thousands of Yemeni civilians have been killed in bombings by the Saudi-led coalition, many using some of the billions of dollars’ worth of U.S.-manufactured weapons. And late last year, a team of U.S. Green Berets secretly arrived at the border between Yemen and Saudi Arabia to help in the war.

The only U.S. combat troops on the ground in Yemen are allegedly targeting Al Qaeda forces. But, according to the ACLU, “military officials have already claimed they do not know the mission of each Saudi aircraft refueled by the U.S.”

National Security Adviser John Bolton has a history of skewing intelligence to support his goals.

Moreover, this resolution will not stop U.S. drone strikes in Yemen. Although those strikes were ostensibly aimed at al Qaeda, one-third of Yemenis killed by U.S. drone bombings were civilians, including several children, according to a recent report by the Associated Press.

Thus, under the guise of removing U.S. forces from hostilities in Yemen, S. J. Res. 54 could actually provide congressional justification for continued military involvement under the War Powers Resolution.

Another bipartisan bill pending in the Senate is the “Saudi Arabia Accountability and Yemen Act of 2018.” Introduced by Bob Menendez (D-New Jersey) and five co-sponsors, including Lindsey Graham (R-South Carolina), S. 3652 would suspend U.S. arms transfers to Saudi Arabia; prohibit U.S. refueling of Saudi coalition aircraft; impose sanctions on anyone hindering the provision of humanitarian assistance, or those involved in the death of Khashoggi, including “any official of the government of Saudi Arabia or member of the royal family”; mandate briefings on U.S. military support to the Saudi-led coalition, including civilian casualties; and require an unclassified written report on the Saudis’ human rights record.

This resolution would prohibit the United States from selling the Saudis arms that could be used for offensive (but not defensive) purposes, including bombs, missiles, aircraft, munitions, tanks and armored vehicles.

The suspension of arms transfers to the Saudis, however, contains a provision allowing a presidential waiver for “national security interests” provided the secretaries of state and defense certify that for the preceding 180 days, the Saudi-led coalition has ceased all air strikes and offensive ground operations “not associated with al Qaeda in the Arabian Peninsula or ISIS.” Again, this would create a significant loophole.

But if S. 3652 gains traction, it would go a long way toward ending U.S. military assistance to Saudi Arabia in Yemen, providing accountability for Saudi atrocities and exerting international pressure on the Saudis to end their brutal killing in Yemen.

Sen. Graham spearheaded a bipartisan non-binding resolution that expresses “a high level of confidence” that bin Salman was “complicit” in the death of Khashoggi, whom it identifies as an “outspoken critic of Crown Prince Mohammed Bin Salman.” The resolution calls for bin Salman to be held accountable for his contribution to the humanitarian crisis in Yemen.

be held accountable for contributing to the humanitarian crisis in Yemen, preventing a resolution to the blockade of Qatar, the jailing and torture of dissidents and activists inside the Kingdom of Saudi Arabia, the use of force to intimidate rivals, and the abhorrent and unjustified murder of journalist Jamal Khashoggi.

Meanwhile, H. Con. Res. 138, which directs the president to remove U.S. Armed Forces from hostilities in Yemen, is pending in the House of Representatives. But procedural maneuvers by Republican Congress members have prevented its consideration during this congressional term. It will likely be reintroduced in some form when the Democrats assume control of the House in January.

H. Con. Res. 138 suffers from similar infirmities as its Senate counterpart, S. J. Res. 54. But instead of carving out an exception for al Qaeda and associated forces, H. Con. Res. 138 exempts “United States Armed Forces engaged in operations authorized under the 2001 Authorization for Use of Military Force [AUMF]” from the mandate of the resolution. Unlike S. J. Res. 54, the House resolution fails to define “hostilities” under the War Powers Resolution.

Although Congress, in the 2001 AUMF, authorized the president to use “all necessary and appropriate force” only against individuals and groups responsible for the September 11, 2001, attacks, three presidents have relied on it to justify at least 37 military operations in 14 countries, many of them unrelated to 9/11.

In a letter to congressional representatives urging opposition to H. Con. Res. 138, the ACLU noted that the exception in the resolution for the 2001 AUMF “raises serious concerns that the Executive Branch will claim that the Congress is implicitly recognizing and authorizing the United States’ use of force in Yemen under the AUMF.”

The ACLU letter also states, “H. Con. Res. 138 could create a harmful precedent that causes the Executive Branch to claim Congress must pass a resolution of disapproval in order for the War Powers Resolution to be effective in stopping hostilities.”

Toward ending U.S. support to Saudis in Yemen

Notwithstanding deeply entrenched U.S. support for Saudi Arabia, outrage over the Saudis’ torturous murder of Khashoggi, as well as campaigns by several progressive groups, have galvanized congressional opposition to U.S. assistance for Saudi killing in Yemen.

In March, a bipartisan Senate bill that would have halted U.S. support to the Saudis in Yemen was defeated 55-44. At the time, Sen. Sanders, who co-sponsored the legislation, stated, “Some will argue on the floor today that we’re really not engaged in hostilities, we’re not exchanging fire. Please tell that to the people of Yemen, whose homes and lives are being destroyed by weapons marked ‘Made in the U.S.A.,’ dropped by planes being refueled by the U.S. military on targets chosen with U.S. assistance.”

“There is a U.S. imprint on every single civilian death inside Yemen,” Sen. Chris Murphy (D-Connecticut) recently declared, “because though the bombs that are being dropped may come out of planes that are piloted by Saudis or [United Arab Emirates forces], they are U.S.-made bombs…. It’s unconscionable.”

Congress now has an unprecedented opportunity to pass a resolution that could substantially reduce the widespread killing and humanitarian disaster in Yemen. This would be the first time since its enactment in 1973 that the War Powers Resolution is used to end a U.S. military operation.

The Senate could act this week, but the House will not take up the matter before next year, and Trump has threatened to veto a resolution. There will invariably be amendments to any concurrent resolution in both the House and the Senate. Although the resolutions, as currently drafted, contain loopholes that could authorize U.S. assistance to Saudi military actions against al Qaeda, and contain a clause for presidential waiver, public pressure on members of Congress to close those loopholes may well prove effective. And if sufficient pressure is applied, a resolution could garner enough congressional support to override a presidential veto.