The Department of Justice announced that the ban would include confiscation 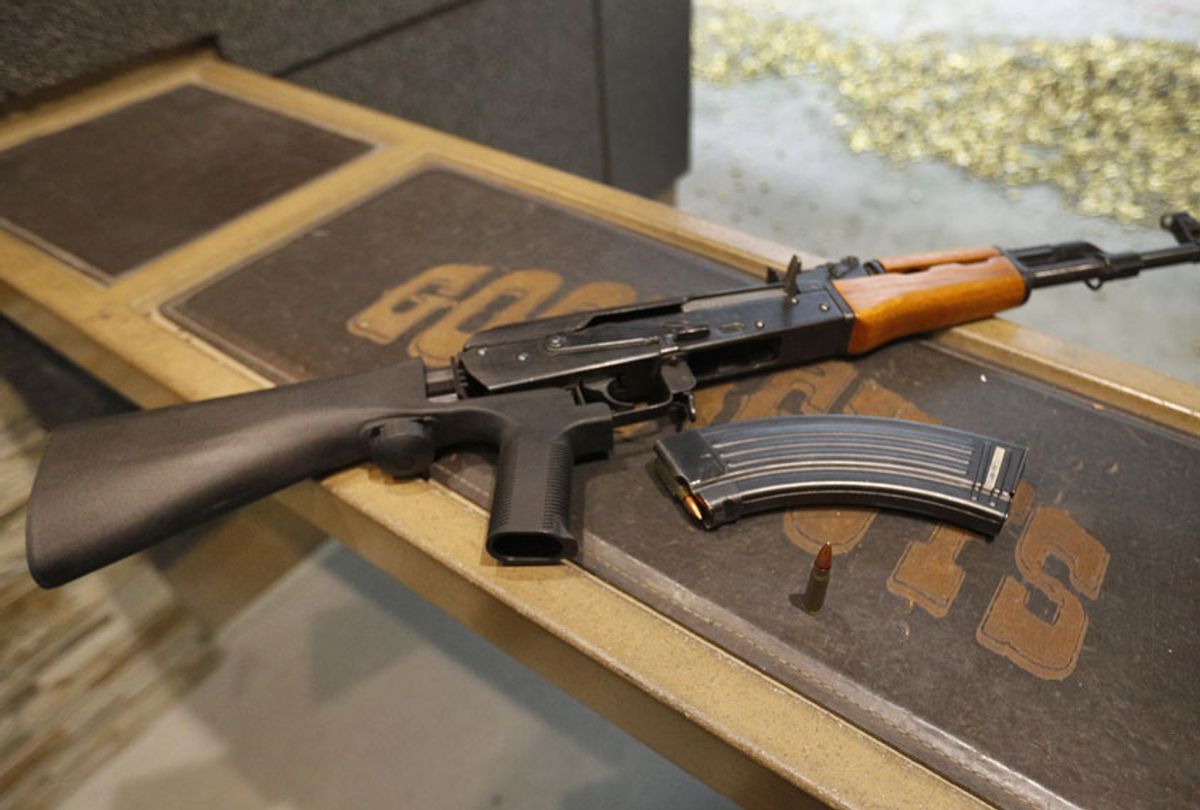 In the seemingly never ending gun control debate between the right and the left, the Trump administration moved to ban the tiny yet central device behind this century's most deadly shootings: the bump stock.

On Tuesday morning, the Department of Justice issued a press release that formally announced the ban on buying and selling bump stocks which will go into effect next March. The device, when attached to a gun allows semiautomatic weaponry to fire rapidly in the same manner as an automatic firearm, was responsible for last year's deadly attack at the Route 91 Harvest music festival in Las Vegas. In the span of 10 minutes, a lone gunman, Stephen Paddock, fired 1,100 rounds of ammunition that killed 58 people and injured over 800.

In what would become the deadliest mass shooting in modern U.S. history, bump stocks were the center of the gun control debate where, in early March, Trump called them devices that turned "legal weapons into illegal machines." Acting Attorney General Matthew Whitaker signed the ban earlier today on Trump's behalf which will go into effect 90 days after its publication in the Federal Register this Friday.

“President Donald Trump is a law and order president, who has signed into law millions of dollars in funding for law enforcement officers in our schools, and under his strong leadership, the Department of Justice has prosecuted more gun criminals than ever before as we target violent criminals," Whitaker wrote in a statement. "We are faithfully following President Trump’s leadership by making clear that bump stocks, which turn semiautomatics into machine guns, are illegal, and we will continue to take illegal guns off of our streets.”

In the press release, the Department of Justice also moved to classify bump stocks as machine guns. Due to this change in definition, owners of bump stocks will now be required to destroy or surrender their lethal devices to the Bureau of Alcohol, Tobacco, Firearms and Explosives by March.

While this ban may come as good news to many in wake of the Stone Douglass High School shooting earlier this year, many gun rights groups are upset. This afternoon, Gun Owners of America said it will seek to challenge the ban or even sue the Trump administration over the debacle. In a public statement, the group's executive director Erich Pratt finds the ban detrimental to American's rights to own other "valuable" AR-15s down the road and claims the ban is unconstitutional.

"“ATF’s new bump stock regulation clearly violates federal law, as bump stocks do not qualify as machine guns under the federal statute,” Pratt said. "This case has important implications for gun owners since, in the coming days, an estimated half a million bump stock owners will have the difficult decision of either destroying or surrendering their valuable property."