Extremely "Relatable": Even Ellen DeGeneres is entitled to her darkness 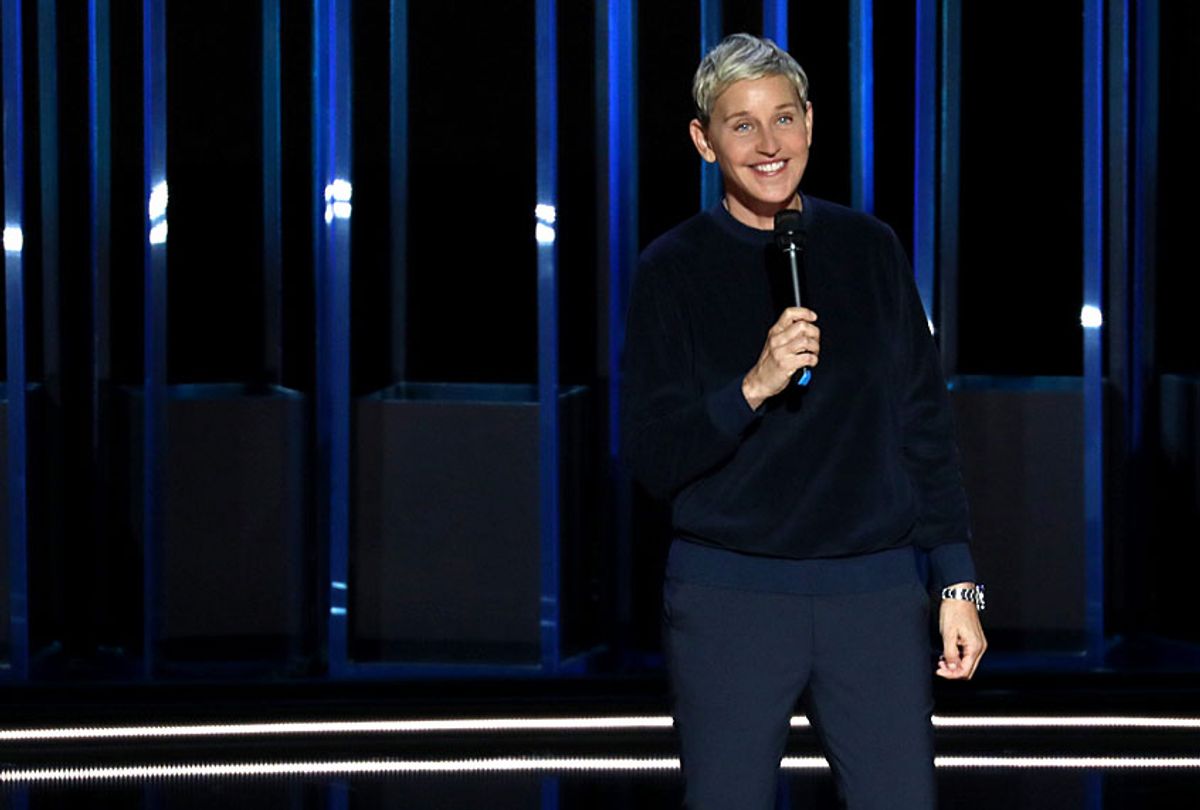 “Relatable,” Ellen DeGeneres’ first comedy special in 15 years, provides a gimlet-eyed view into the American relationship with celebrity. It’s complicated, that much we know.  Fame exacts a toll. On the other hand, for $87.5 million a year the average person might gladly dance upon command and curb their temper while in public.

So when DeGeneres opens her show on a fictionalized conversation with a friend in devil’s advocate mode who asks whether she thinks she’s still relatable, she says yes. I’m a human being, she says, even though her life has changed so much.

“Anyway, just then Batu, my butler, stepped into the library, and he announced that my breakfast was ready. And I said, ‘We’ll continue this conversation another time. This is ridiculous.’”

What do celebrities owe us, anyway? The 60-year-old DeGeneres’ doesn’t specifically ask that question but it’s implied in her Netflix special’s title. The answer to that question is simple: nothing. Also, their careers, their lavish lifestyles . . . in short, everything.

DeGeneres’ wealth and continued popularity didn’t materialize out of thin air. It is sustained and fattened up by the adoration of the millions who watch her syndicated weekday talk show, who amuse themselves with her app and relax into the goodnatured, harmless physical humor of “Ellen's Game of Games,” returning for its second season on NBC Tuesday, January 8 at 8 p.m.

In “Relatable,” which debuted Tuesday, DeGeneres doesn’t mention that she’s contemplating the end of “The Ellen DeGeneres Show” — something her wife Portia de Rossi would like her to do, according to a recent New York Times profile, a move that would alter the daytime TV landscape as fundamentally as Oprah Winfrey’s departure has.

Instead, in her special directed by Tig Notaro and Joel Gallen, DeGeneres is gracious about her good and massive fortune, frequently joking about her wealth without losing the audience. On the contrary, she presumes that the audience packing the house at Seattle’s Benaroya Hall is on her side because, well, aren’t they?

“Relatable” fulfills a number of missions within its hour-plus running time. It is smart, genuinely funny and true to the comedian’s brand, and it reminds us that DeGeneres, the daytime figure synonymous with kindness and incredible gift-giveaways, also is entitled to her darkness.

She doesn’t knock on that point by going blue or even, in a fundamental way, proving the headline of her Times profile to be true. What the special shows is that Ellen DeGeneres actually is as nice as you think, and normal. She just wants the public at large to know that it may not by entitled to experience that niceness 24 hours a day and seven days a week any more than we’d expect it of another person.

One might even think of “Relatable” as the matching comedic bookend to Hannah Gadsby’s “Nanette” (which DeGeneres loves, according to the Times profile). Their core arguments could not differ more greatly, mind you; Gadsby’s refrain discusses her need to “quit comedy,” whereas DeGeneres’ work is an extended example of the ways comedy makes life’s most unbearable moments survivable.

It bears pointing out that Gadsby and DeGeneres occupy very different rungs on the success ladder. Gadsby, the explosive triumph of her Netflix special notwithstanding, is nowhere near to being the household name that DeGeneres has become.

Where they find common ground is in their examination of expectation as that concept applies to identity and notoriety.

Gadsby, with no shortage of well-deserved anger, demands to know why we believe male genius often comes at the cost of female exploitation, in which the former’s singular work and contribution to culture elevates him to a space beyond accountability, and the latter is expected to accept that.

In “Relatable” DeGeneres examines the public’s acceptance of the fame equation, not only in terms of perceived rights to privacy but with regard to one’s right to an occasional bad moods.

As she admits to the audience, this isn’t easy. “I’m the ‘be kind’ girl,” she says, referring to her sign off. But, she adds, “I’m a human being and I have bad days and I’m in traffic. I drive. But I can’t do the things other people do.” Afterward, she also admits her regret to start dancing on her show, a bit she stopped two years ago but is still expected to do, wherever she is.

And in this respect, DeGeneres’ special also is an inquiry about fictional presumption of intimacy with celebrities, a connection we’re conditioned to adopt via constant exposure to stars.

Without Oprah’s daily talk show and the succor it offered, and without any guarantee of stability in our political landscape, DeGeneres has evolved into America’s happiness pump.

“We look at somebody, we decide we know all about them,” she tells the audience. “We put someone in a box.” And this manufactured closeness can be comforting. It can sell the average person on ridiculous ideas, like a corrupt businessman and reality star’s fitness to be president.

Mind you, “Relatable” is free from political reference; DeGeneres’ honest peek into her memory and heart provides more than enough material and food for thought. Plus, she has a knack for poking fun Jennifer Aniston’s courageous and headline-producing battle with “dry eye.” (“She’s your friend, she’s my friend, she has dry eye and that’s OK!”)

But then, at several points, she reminds the folks in the room that wasn’t always the case, albeit in the kindest way possible. Like say, that time she came out on her ABC sitcom “Ellen,” way back in 1997. Everybody celebrated her bravery for five minutes, she reminds us, adding she hoped her move would embolden other Hollywood actors come out, too.

And she illustrates what actually happened by playing a video clip of adorable meerkats on a large screen behind her, narrating the chapter as the animals peek out of their earthen holes, sussing out the landscape and then ducking back inside.

Stardom is fickle and cruel in ways that are, yes, relatable. Overnight, the millions who loved her and the congratulatory media suddenly despised DeGeneres, she reminds us, and her peers made her a cruel punchline. As she was attempting to sell her talk show, she recalls one station manager telling her, “No one’s gonna watch it. No one’s gonna watch a lesbian during the day.”

“And I said, ‘Well, they weren’t watching me at night. What time of day is good for a lesbian?’”

Both the bit land and the punchline DeGeneres fashions out of that insult land, the audience claps and perhaps the viewer gets the larger point DeGeneres is making. Yes, her life may be all butler-drawn baths and rose gardens now, but along the way there’s been abandonment, discrimination and despair.

These chapters are public record. An emotional bomb she drops later, in the form of a very personal story most people may not know, is not. The “tragedy plus time” equation doesn’t apply here, because although DeGeneres presents this in the most level way possible it’s plain to see the agony of that memory still stabs at her.

It also makes her more real to everyone — to her fans and anyone else who has an immutable notion of who she is without taking into account the expectation of who we expect her to be.

DeGeneres is nice and still very funny and also is the 15th highest-paid celebrity in 2018. She’s a flesh-and-blood person with limits who doesn’t have to dance for your pleasure, and after watching "Relatable," you might notice a shade of cathartic glee playing around her smile on "Game of Games," particularly whenever she pushes a button that sends screaming  contestants down chutes to nowhere.

It’s understandable to hope the fun-loving host continues providing a daily optimistic TV refuge in an increasingly bleak world. But this special may help a person to understand why, after more than 16 years of acting as America’s one-woman sunshine band, she’s claiming the right to close the shades.