In the context of the ongoing Mueller investigation, the nomination of Barr is both appalling and unsurprising 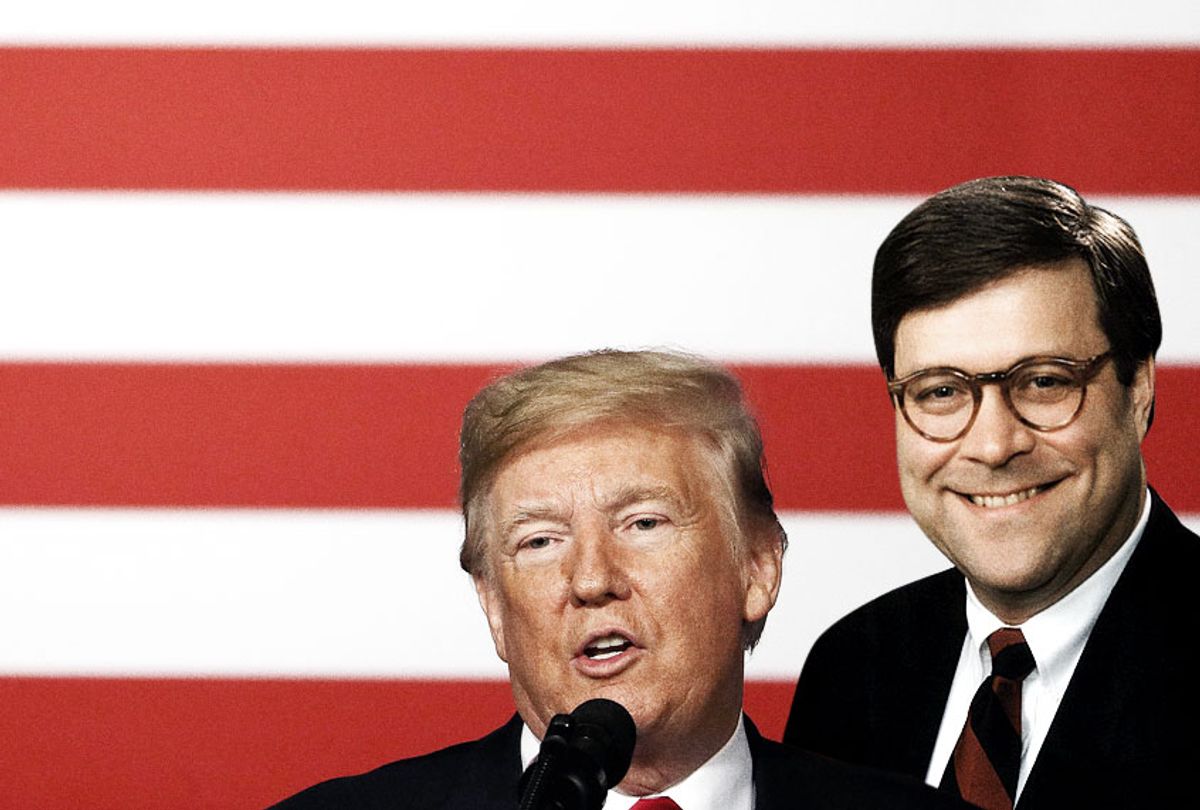 Donald Trump has been president for almost 700 days now. In all that time, I have managed to find exactly one redeeming quality in the man: I thoroughly enjoyed the prodigious hard time he gave his now-departed attorney general, Jefferson Beauregard Sumpter Appomattox Shiloh Both Bull Runs Sessions III. Even that small pleasure, however, is poisoned.

Aside from Scott Pruitt, who managed to defoliate the Environmental Protection Agency while stealing everything that wasn’t nailed down or glued to a desk, Sessions was Trump’s most effective cabinet secretary by far and away. His backlit segregationist tendencies, his ruthless pursuit of child-parent separation at the southern border, and his retrograde approach to the criminal legal system and the so-called “war on drugs” all conspired to make me loathe Sessions without restraint. Trump hated Sessions because Sessions wouldn’t protect him from Robert Mueller, which thoroughly spoiled my enjoyment of that spectacle while it lasted.

The Trump-Sessions passion play ended a day after the 2018 midterms with all the class and collegiality of a car accident, to the great surprise of nobody. Three weeks later, we are three weeks away from the arrival of a new Congress, which will have on its plate Trump’s nominee to replace Sessions. Trump has tapped William Barr to be his next attorney general. In the context of the ongoing Mueller investigation, the nomination of Barr is both appalling and unsurprising in equal measure.

What a piece of work is this guy. Barr was assistant attorney general, and then attorney general, during the presidency of George Herbert Walker Bush (who at last report remains dead despite his ongoing appearances in the news cycle). The most noteworthy line item on Barr’s résumé is his decision to officially recommend pardons for six of the top scoundrels — Caspar Weinberger, Robert McFarlane, Elliot Abrams, Duane Clarridge, Alan Fiers and Clair George — in the Iran-Contra “scandal.”

“The Reagan administration had been negotiating with terrorists (despite Reagan’s repeated public position that he would ‘never’ do so),” wrote Peter Kornbluh of Iran-Contra. “There were illegal arms transfers to Iran, flagrant lying to Congress, soliciting third country funding to circumvent the Congressional ban on financing the contra war in Nicaragua, White House bribes to various generals in Honduras, illegal propaganda and psychological operations directed by the CIA against the U.S. press and public, collaboration with drug kingpins such as Panamanian strongman Manuel Noriega, and violating the checks and balances of the constitution.”

“Scandal,” they call it. Sometimes it’s the “Iran-Contra affair,” as if Oliver North were cheating on Daniel Ortega behind the Shah’s back. In point of fact, it was a felony festival in which missiles and other war weapons were sold to Iran to pay for the slaughter of civilians, nuns and schoolteachers in Central America. It was a genuinely murderous piece of business, and H.W. Bush was in it up to his knobby little patrician chin. The pardoning of those six men guaranteed that Bush Sr. would die comfortably in his own bed, and Barr did his part to make sure that escape from justice was seamless.

Dick Cheney’s belief that the executive branch is beyond the rule of law began during his time as a staffer to Donald Rumsfeld in the Nixon White House, but those beliefs grew fangs and claws during the Iran-Contra investigations. The same, as it turns out, can be said for Barr, who journalist Jeremy Scahill describes as a “fanatic who believes in a dictatorship of executive power.”

With unitary executive adherent Brett Kavanaugh firmly ensconced on an already hard-right Supreme Court and Mueller’s work nearly completed, the peril of an attorney general who cleaves to presidential invincibility is manifestly unnerving. There is little need to dust off the Iran-Contra files to explain what a menace Barr is to the cause of justice. Very recently, he made it abundantly clear that he considers Mueller’s investigation to be an invasive waste of time, and has cheered Trump’s call for investigations into Hillary Clinton and other political opponents.

All that and a bag of chips: Barr would be a terrible nominee even without his Iran-Contra unitary executive baggage, because he brings to the table everything that made Jeff Sessions a terrifying attorney general. Barr, like Sessions, is a merciless regressive on the topics of mass incarceration and mandatory minimum sentencing. He does not believe in abortion rights, even in the case of rape, and has actively opposed providing equal rights to the LGBTQ+ community for decades.

The ACLU states that Barr’s record “suggests that he will follow Jeff Sessions’ legacy of hostility to civil rights and civil liberties.” The Drug Policy Alliance concurs: “It’s hard to imagine an attorney general as bad as Jeff Sessions when it comes to criminal justice and the drug war, but Trump seems to have found one.”

Barr must be confirmed by the Republican-controlled Senate, and “is likely to face tough questions at a Senate confirmation hearing,” according to The Washington Post. Under normal circumstances, I would dismiss the idea of a stalwart Democratic minority rising to the occasion, but that was before Trump went Full Baby Huey on Chuck Schumer and Nancy Pelosi in the Oval Office on Wednesday. Trump’s tantrum — “I am proud to shut down the government!” he declared at one point — certainly doesn’t change the math in the Senate, but it could help make for some interesting hearings when the time comes.