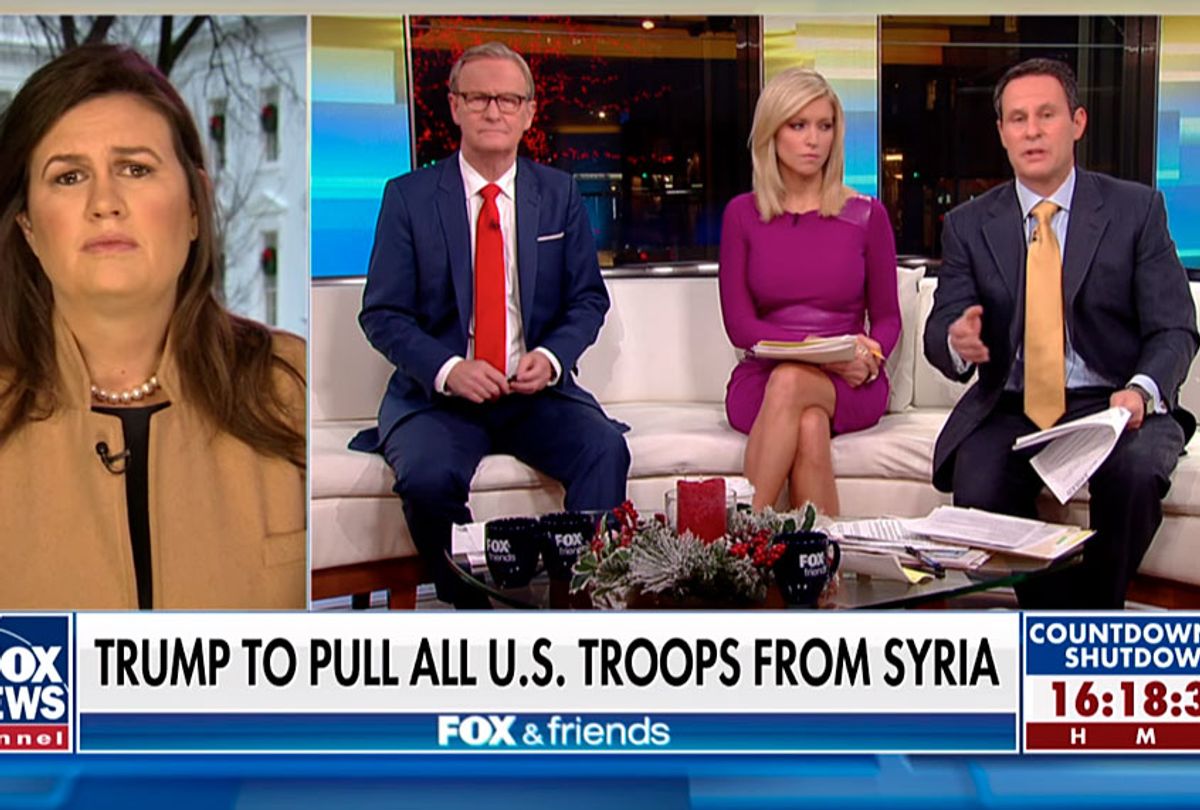 Brian Kilmeade, the host of President Donald Trump's favorite morning show, "Fox & Friends," ripped into the president over his abrupt announcement that he wants to withdraw all 2,000 U.S. troops from Syria— a decision Kilmeade warned would allow the Islamic State group, also known as ISIS, to re-establish its reduced power.

Trump, during the 2016 presidential campaign, accused former President Barack Obama of being the "founder of ISIS" because of the power vacuum critics contend Obama established after he withdrew U.S. troops from Iraq in 2011. "He was the founder," Trump said at the time. "His, the way he got out of Iraq was that that was the founding of ISIS, okay?"

Kilmeade noted that ISIS still has thousands of fighters in the region despite the fact its power has been diminished due to a loss of territory across Iraq and Syria. "The president is really on the griddle with this," Kilmeade said.

Sanders, who appeared somewhat surprised and amused at Kilmeade's claim, replied, "Brian, I have to respectfully and vehemently disagree with you."

"The idea that the president has had anything to do with helping ISIS reemerge is absolutely outrageous," Sanders added.

Kilmeade, who often defends Trump on television, then said, "Leaving is helping."

Sanders continued to push back, stating that if ISIS wants to "pick a fight" with Trump then he will "destroy them and defeat them."

In a searing insult to Trump's ego, Kilmeade compared Trump's announcement to Obama's attempts to get troops out of Iraq: "He is doing exactly, if not worse, than what President Obama did."

The president appeared to be tuning in as he expressed his frustration on Twitter not long after Kilmeade's outburst. He said, "I've done more damage to ISIS than all recent presidents....not even close!"

But turning to FoxNews.com would not have served as much of a refuge for the president.

"Trump is about to repeat Obama's mistake in the Middle East," read a headline of the network's website on Friday.

"When your enemies are cheering," wrote former George W. Bush speechwriter Marc Thiessen, "you have made a mistake."

"The fact that the US has decided to withdraw its troops is right," Putin said at an annual press conference.

But Trump's decision prompted confusion and alarm in Washington and beyond. Just a day before Trump declared ISIS was defeated, State Department deputy spokesman Robert Palladino said, "We've made significant progress recently in the campaign ... but the job is not yet done." In addition, Defense Secretary James Mattis, who did not agree with Trump's thinking and decision on Syria, announced his resignation Thursday.

In his resignation letter, Mattis wrote, "Because you have the right to have a Secretary of Defense whose views are better aligned with yours on these and other subjects, I believe it is right for me to step down from my position."

Trump also faced significant backlash over the announcement to pull out U.S. troops from fellow Republicans.

Sen. Marco Rubio of Florida expressed similar dismay with the announcement. In a tweet he proclaimed that "'full and rapid' withdrawal from #Syria is a grave error with broader implications beyond just the fight against #ISIS."

For his part, Trump on Wednesday declared the terror group has been "defeated" and announced plans for a "full" and "rapid" withdrawal of U.S. troops from Syria were underway. He also shared a video on social media, in which he defended his decision to leave Syria.

Trump on Thursday, however, appeared to walk back his claim that ISIS had been totally defeated, and suggested that other countries, including U.S. allies, will have to confront ISIS on their own.

"Does the USA want to be the Policeman of the Middle East, getting NOTHING but spending precious lives and trillions of dollars protecting others who, in almost all cases, do not appreciate what we are doing? Do we want to be there forever? Time for others to finally fight," Trump said.