The big "Bumblebee" question: With no Michael Bay, could Transformers have been good all along?

"Bumblebee" is a heartfelt story of wonder rather than an explosion factory packed with vulgar, offensive jokes 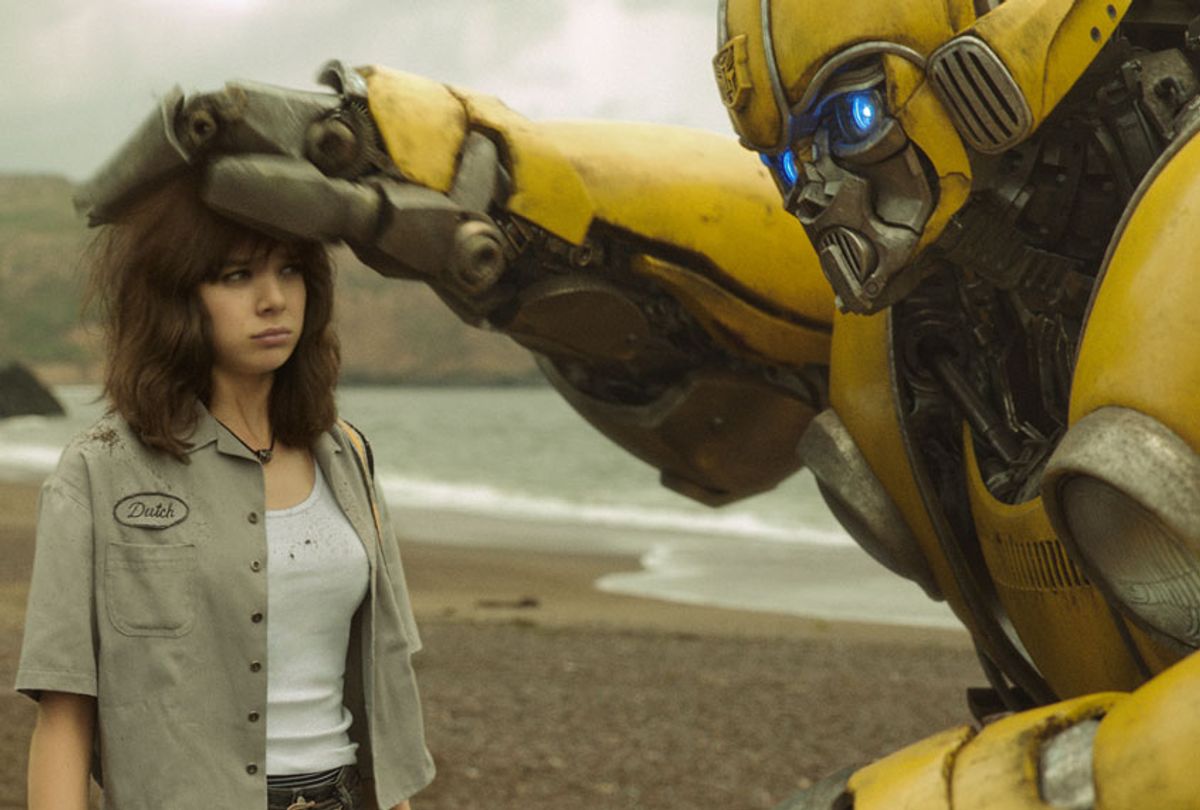 Hailee Steinfeld as Charlie and Bumblebee in "Bumblebee" (Paramount Pictures)
--

I must confess when I first heard that a "Transformers" spin-off about Bumblebee was in the works, my expectations were subterranean. After five headache inducing "Transformers" movies, all visually incoherent and narratively chaotic, I couldn't fathom how a sixth would be any better.

My mistake, it seems, was forgetting that the "Transformers" franchise exists separately from Michael Bay, the explosion-happy director who has helmed the previous five entries. As it turns out, when you take the "Transformers" concept and use it to tell a heartfelt story filled with wonder rather than a special effects extravaganza packed with vulgar and offensive jokes, you can create a genuinely good movie.

"Bumblebee" tells the story of how the titular character (briefly voiced by Dylan O'Brien) goes to Earth in 1987 to provide a refuge for his fellow Autobots, most notably Optimus Prime (Peter Cullen), as they are being chased by Decepticons led by Shatter (Angela Bassett). After nearly being murdered by Decepticons shortly after his arrival — an event that is witnessed by government agent Jack Burns (John Cena) — Bumblebee, known at this point as B-127, befriends a teenage girl named Charlie Watson (Hailee Steinfeld) and her friend Memo (Jorge Lendeborg Jr.), and they have a series of mini-adventures before eventually facing off against the Decepticons and sinister government agents led by scientist Dr. Powell (John Ortiz).

This is more or less what you'd expect from a "Transformers" movie, and yet "Bumblebee" does something that audiences really only got to see at the beginning of the first live-action "Transformers" film in 2007. In the earlier scenes of that film, there was a Steven Spielberg-ian quality to the story (Spielberg is an executive producer of the series), one that tried to focus on the feeling of just how cool it would be for a kid to have their very own Transformer. This idea not only drove the plot of that movie (at first), but imbued it with a sense of wonder; I vividly recall the moment when Optimus Prime first spoke with Peter Cullen's voice, who had also played the character in the animated series, and half of that 2007 auditorium cheered.

Unfortunately, the sludge that is Michael Bay's soul couldn't resist bubbling up to the surface, and when that inevitably happened it drowned out the burgeoning quality of the earlier section of that movie. The second half of "Transformers," as well as the entirety of the four miserable movies that followed — including 2009's "Transformers: Revenge of the Fallen," 2011's "Transformers: Dark of the Moon," 2014's "Transformers: Age of Extinction" and 2017's "Transformers: The Last Knight" — were defined by bombastic action scenes in which you frequently couldn't tell which robot was punching what; broad, obnoxious comedy that would make even the most juvenile teenager cringe; racial and gender stereotypes that would be offensive in any context but were especially appalling in a series aimed at children; and explosions. Lots and lots of explosions.

It says something about the degree to which Bay left his imprint on the Transformers brand that these qualities soon were soon associated with the entire series.  The phrase "Transformers movie" became synonymous with lazy screenwriting, horrendous characters, lowbrow comedy and over-indulgent special effects because after a solid decade of Bay helming the franchise his approach to filmmaking seemed inseparable from the brand. It became possible to forget that, before 2007, Transformers had been a clever toy line and existed in an animated universe that was genuinely heartfelt and charming. The tentacles of Bay's cynicism had managed to smother the beloved Transformers name, leaving nothing but empty popcorn cinema and billions of dollars in its wake.

Yet "Bumblebee" avoids these pitfalls by returning to the child-like wonder found at the beginning of the first film. Much credit belongs to director Travis Knight and screenwriter Christina Hodson for crafting a story that wouldn't feel out-of-place in a better '80s film: The plot threads in which Charlie uses her friendship with an alien creature to cope with the loss of her father feels straight out of "E.T.," as does Jack Burns overcoming his initial prejudice against the extraterrestrial and getting back in touch with his inner decency. Yet these wouldn't be so effective if it wasn't for the fantastic performances of Steinfeld and Cena, who convincingly make these characters seem like flesh-and-blood human beings rather than two-dimensional cardboard cutouts. It would be enough for them to simply not be as insufferable as the characters played by Shia LaBeouf, Megan Fox and Mark Wahlberg in the original series, but because they're downright likable, one leaves the theater hoping they'll be brought back for a sequel — and, indeed, wishing the Bumblebee character had reached out to them in the later movies.

That's not to say the film lacks action — "Bumblebee" improves on that front as well. One of the most frustrating qualities of Bay's Transformers films is that it was notoriously difficult to keep track of which robots were which; what Bay no doubt thought was thrilling spectacle became a confusing chore for audience members who couldn't determine what was happening in the plot (which, for Bay, was always a secondary consideration anyway). With "Bumblebee," though, I always knew precisely who was fighting who, when and where they were fighting each other, why they were fighting each other and what the stakes were in the fights themselves. This is an admittedly low bar to apply to action scenes, but because Bay let them sink to such depths, the fact that "Bumblebee" elevates action back to the level of competency is commendable.

It is tempting to overstate "Bumblebee"'s accomplishments, which I am reluctant to do. While it is the best "Transformers" movie by far, that isn't really saying very much. At the same time, "Bumblebee" does hold up as a fun, family-appropriate movie on its own terms, and redeems its beleaguered franchise in the process.