In 2001, "Temptation Island" was trashy, cynical TV. Maybe it was 18 years ahead of its time 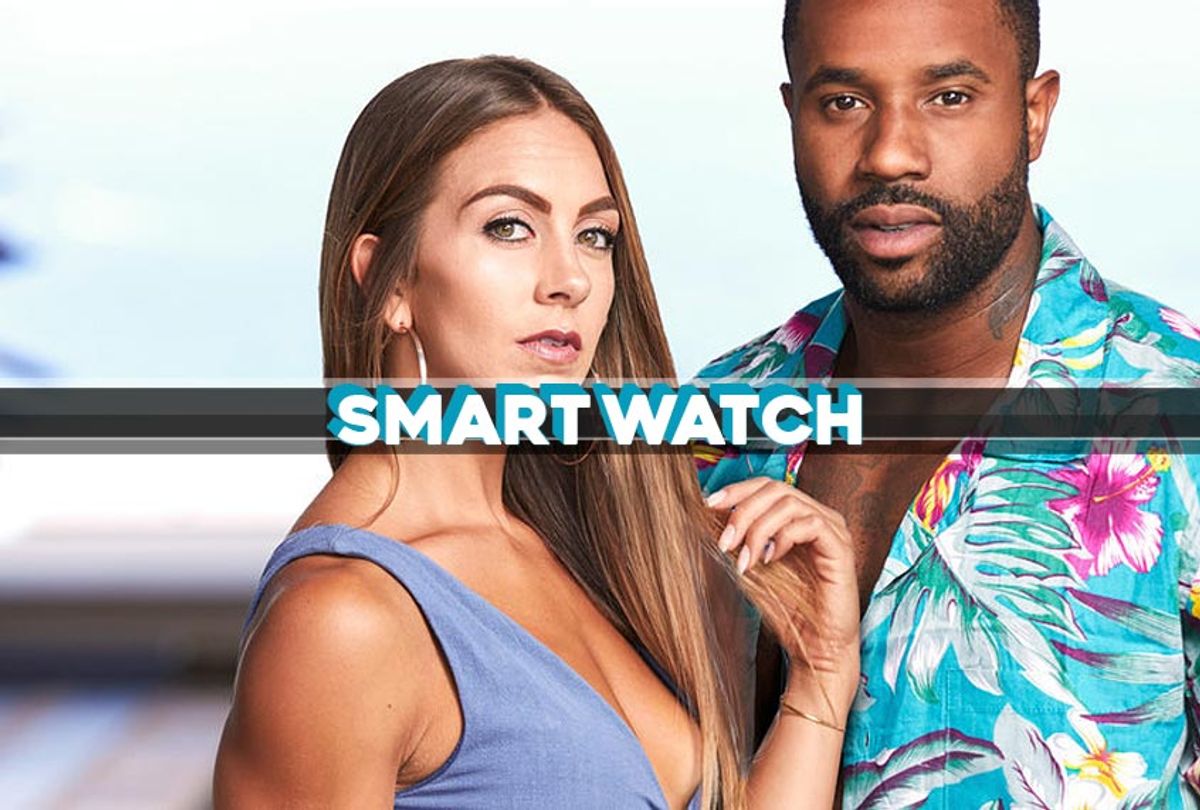 Before 9/11, but also in 2001, Americans obsessed over a benign and, let's be honest, entirely brainless sort of disaster: Fox's "Temptation Island."

"Temptation Island" is a simple, trashy proposition: Several unmarried couples who are at a crossroads in their relationship visit a remote paradise where they split, and each partner lives separately, with groups of single ladies and men of the opposite sex.

Ostensibly this is meant to challenge the fortitude of their relationships. Drama ensues, involving tears, the snatching of extensions and a lot bleeped expletives.

But it's not as if anybody put a ring on it before they sailed to Cheatin' Cove, so no harm, no foul.

Imagine our delight at the news that "Temptation Island" is back, this time on USA and sporting all the high-production gloss of a Durex commercial.  Drink in the trailer, which could be an advertisement for one of the bargain package parks in Westworld — you know, for the poors who can't afford safaris with androids, but still have enough disposable income to convince themselves they can do better than an all-inclusive resort compound in Maui.

We're talking circa 2001, when "Survivor" was the highest rated series in primetime, having transformed the unscripted television gamebook originally shaped in the 1990s by MTV's "The Real World."

"Survivor" added a psychological element to the shut-in factor, not only forcing strangers to live together but exposing them to the elements and stepping back to watch just how ruthless they'd become.

"Temptation Island" represents the unholy wedding of that long-running if seminal CBS series and MTV's Petri dish. Or as former Salon arts critic Carina Chocano lyrically described it in 2001, it was "Fox's answer to the Stanford Prison Experiment, only with sand."

Season 1 was a surprise hit, premiering at the end of January 2001 and running through the end of February, dumping out all over that year's Valentine's Day fever.

The second season debuted October 31, 2001 — less than ideal, given that was a month after 9/11 and audiences, still numb with shock, craved comfort. What America didn't need was cynicism brought to us by conniving hotties on Nobody Here is a Virgin Island; that run tanked, and although the series was picked up for a third round, its popularity never recovered.

"Temptation Island" became synonymous with the worst of unscripted reality in the Aughts, even though the genre was yet to hit an oil patch and skid right into "Fear Factor."

But we know better now.

You see, post 9/11 was the age of "The Bachelor" and artificially inseminated romance (metaphorically speaking!), when America wanted real faked courtship, with dating and roses and champagne and tears and limousines. They wanted Chris Harrison, not Mark L. Wahlberg.

But 18 years ago the creators of "Temptation Island" could not have known how profoundly and thoroughly the world would tumble into cynicism, not to mention nihilism, and how extensively popular culture would come to regard romance as transactional and fleeting.

Thus, "Temptation Island" is a natural choice for a reboot because — I mean, look at where we are.

Technology has refined all of the physical legwork and emotional messiness out of the hunt for love. One might even theorize it has refined love itself out of the algorithm. Courtship in the Tinder Age removes antiquated expectations such as monogamy out of the dating equation. In some quarters, even commitment itself is a perishable concept.

And if you think about it, "Temptation Island" is where the reality series path that leads to "90 Day Fiancé" begins.

TLC's stupefying longform docuseries is a great and terrible beauty that combines the appearance of overnight love with the practicality of immigration concerns. Gasp! Yes, it's an immigration-themed series that's not about walls. And it pre-dates the current mainstreaming of xenophobia, having debuted in 2014.

The series follows couples who have applied for a K-1 visa, allowing a U.S. citizen to bring over their affianced love from another country. From the moment each hot and hopeful foreigner sets foot in the United States, the pair has 90 days to get married, or international bey has to return home.

Remember, Great Leader is only worried about penniless, desperate and dusty brown people invading our country on foot. Pageant hotties are a different matter. Foreigners hot enough to be extras in videos can afford plane tickets, or can land Americans willing to pay for their plane tickets.

Ideally they'd all be Swedish. But the Swedes don't want or need us, and besides, they have socialized medicine. This is not the time to get choosy, America.

As Rob Sheffield recently pointed out in his recent Rolling Stone article on this madness, which I am not going to attempt to top, a mercenary element exists in each storyline that makes "90 Day Fiancé" addictive, in a "taking joy in the misery of others" kind of way that also reflects a fun-house version of American immigration fears.

But then there's the other side of the coin, which Sheffield weaves into a metaphor for the series dangerous seductiveness:

Getting hooked on 90DF is like falling for a stranger you found online, then leaving your homeland to meet your new soul mate, then the next thing you know, you're stuck in Baraboo, Wisconsin, surrounded by hostile folks arguing in a language you barely understand, while planning your quickie wedding at the local Dunkin Donuts.

Hence, Season 6 has blessed us with a variety of Yanks who went on vacation and returned with their hearts pledged to lovers who were strangers only a short time ago, but are now dedicating themselves to staying in the United States permanently.

A couple of these crazy kids just might make it. Seriously. The rest are dealing with invisible extra partners in their relationship, primarily language and culture barriers but also narcissism and insanity.

Throughout its six seasons, there have been examples of relationships sweetly blossoming despite the odds, shuffled in with a bunch of would-be "The Jerry Springer Show" panelists.  In the way of many veteran reality series, however, the featured couples have gotten less likable and more wretched as the series has evolved.

The current season, airing its finale on Sunday, is a journey through various trainwrecks in progress.

Most would trace this show's lineage back to "The Bachelor," since the Americans have bought the "love at first sight" fairy tale hook, line and sinker.

If not that, they've convinced themselves that true affection can be established across digital space and time or hatched in the bubble of destination travel. To be fair, that does happen, albeit rarely.

A few of their non-American lovers also believe in that fantasy. Others are in it for the exposure and the green card.

But such strains of false hope and manufactured conflict share more DNA from "Temptation Island," except instead of booty booty booty booty rockin' everywhere, the couples in question are set up by suspicious family members and the worst parts of America's fast-casual culinary and dressing habits.

Season 6's king and queen, Colt and Larissa, represent a cautionary worst-case scenario of instant love premise. Colt is a gentle computer programmer who lives with his mother, a cat lady, in Las Vegas. He met Larissa through an online dating website. She hails from Brazil. She's also a volatile nutcase.

As one might imagine, Larissa thought she'd slide into the lifestyle of a high roller. Colt, meanwhile, thought he'd landed a normal person. Wrong on both counts.

Thus their road to that 90-day cutoff is pretty much a one-woman telenovela being inflicted on a horrified family who can't understand how they found themselves trapped with this force, as if they were shipwrecked on a landmass surrounded by deep water and terrorized by humanity's darkest impulses.

All of this is a gift to rubberneckers, who are the reason TLC even exists in 2018. Two decades ago, grave disaster brought the nation together, but a series of small ones, apparent and invisible, have steadily chipped away at our trust in the intervening years.

Nowadays, when a devastating hurricane is considered tragedy when it hits Texas and an example of a failure of impoverished people to prepare in Puerto Rico, we're inured to the sufferings of others — especially anyone who isn't on our team.

The shielding of the television screen makes natural disaster palatable. The variety people choose is now embraced as entertainment.