Forgot to order the Christmas roast? Reverse-sear steak for the holidays 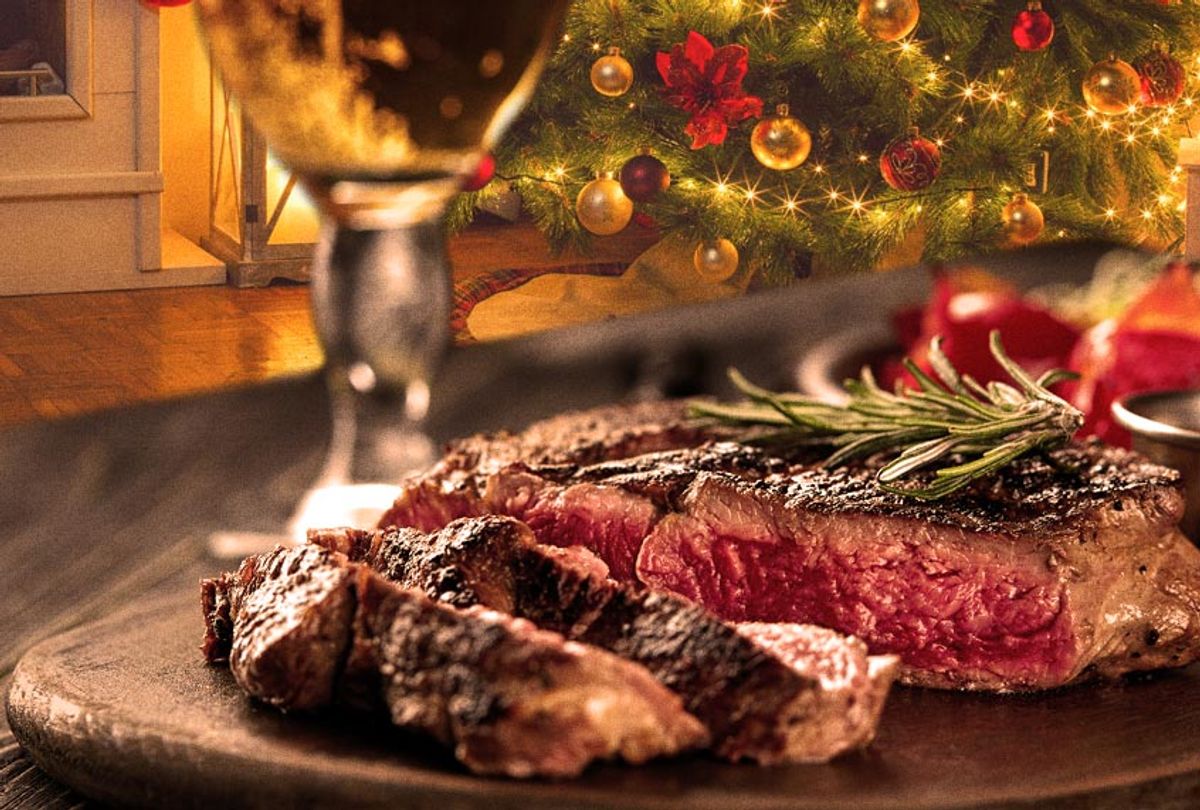 Holiday feasts tend to summon images of charismatic mega proteins like prime rib or crown rack of lamb or a golden-hued goose, all of which need to be ordered in advance. If the comings and goings-on in Trumplandia or the market's precipitous dive in December, or maybe the specter of a resurgent ISIS swarming out of Syria has you focused on other things, you would be forgiven for forgetting a thing or two on your festive list, but overlooking the centerpiece of the holiday meal could prove a costly misstep.

I walked by Paisanos, my favorite neighborhood butcher this afternoon and the line of holiday preppers was around the block, and that was for folks picking up cuts they'd ordered weeks ago.

If you're scrambling, here is a solution. Steak is a luxury menu item that pleases most everybody but gets left off holiday ledgers primarily because it is served with simple sides that are not time intensive, and because it is most often cooked outside on the grill.

Reverse-searing is a method that keeps the steak preparation in an unusually controlled state because rather than the high-stakes game of perching the cut on the edge of an inferno and flipping it regularly to avoid incineration, you are melting the meat in a low oven and then giving it a quick smack in the face with a superheated cast iron pan. This technique allows you to prep sides and keep them warm on the bottom shelf of the oven while you prepare the steaks, or, if you have access to an outdoor grill you can prepare many of the sides simultaneously on the stovetop while you blast the steak on cast iron over an open flame.

Steak is typically the centerpiece of the meal with very few and often simple side dishes so the portions tend to be larger (typically nine ounces or so per person). When served as part of a festive meal, the meat will be competing with the trimmings, so scale back your portion sizes when shopping at the butcher. It is is also important to buy cuts of uniform thickness (the standard is 1.5 inches, I buy mine closer to two inches) so that, no matter how many steaks you buy, you hit your target when you're aiming for medium rare — and you are aiming for medium rare. Don't make Donald Trump's mistake of assuming everybody likes their steaks well done. If you do, you are the exception; well done steaks are awful, and a nearly unforgivable waste of cow.

When selecting the cut, I look for ones without bones, so I like New York Strip steaks, boned Rib Eyes, Eye Round or Top Sirloin (London Broil is a preparation method, not a cut, the cut is usually Top Round, so not technically a steak. If you can get it 1.5 inches thick it's a suitable stand-in, but the lack of integrated fat in the Top Round means you have to gamble with flavor and tenderness).

Reverse-sear is a two-stage cooking process. The first stage occurs in the oven. Preheat your oven to 275 degrees. It's important that you have a gentle oven because, in this first stage of the preparation, you are going to cook the steaks for about an hour (time the preparation of your sides accordingly, you'll want to serve the steaks after they are seared). For medium-rare, you want an internal temperature of 135 degrees, so pull your steak at 120 or 125 degrees. Tent the steaks with foil and let them rest 10 to 15 minutes while you preheat your cast-iron skillet — you can also use a hot charcoal or gas grill if your stove top is crowded (fire that before the steaks come out of the oven).

The rest period is important to the reverse-sear. The temperature will regulate throughout the cut and raise a few degrees while it sits. Though the caramelization does impart important flavor, the final searing stage is very quick and done primarily to finish the surface of the meat for presentation, so not much heat transfers to the interior of the cut.

When the cast iron pan is turning white hot (test it by dripping tap water onto the surface, if it evaporates in a single blast of energy, the pan is hot enough. Turn the ventilation hood on high. Do not add oil or anything but steak to the pan. Place the steaks in the pan two at a time if they fit without touching. Press the steaks into the pan with a long-handled spatula, flipping often. When it looks great (we're talking two minutes), remove it from the pan. Repeat as necessary.

Cut the steaks quickly after they are seared and serve immediately.