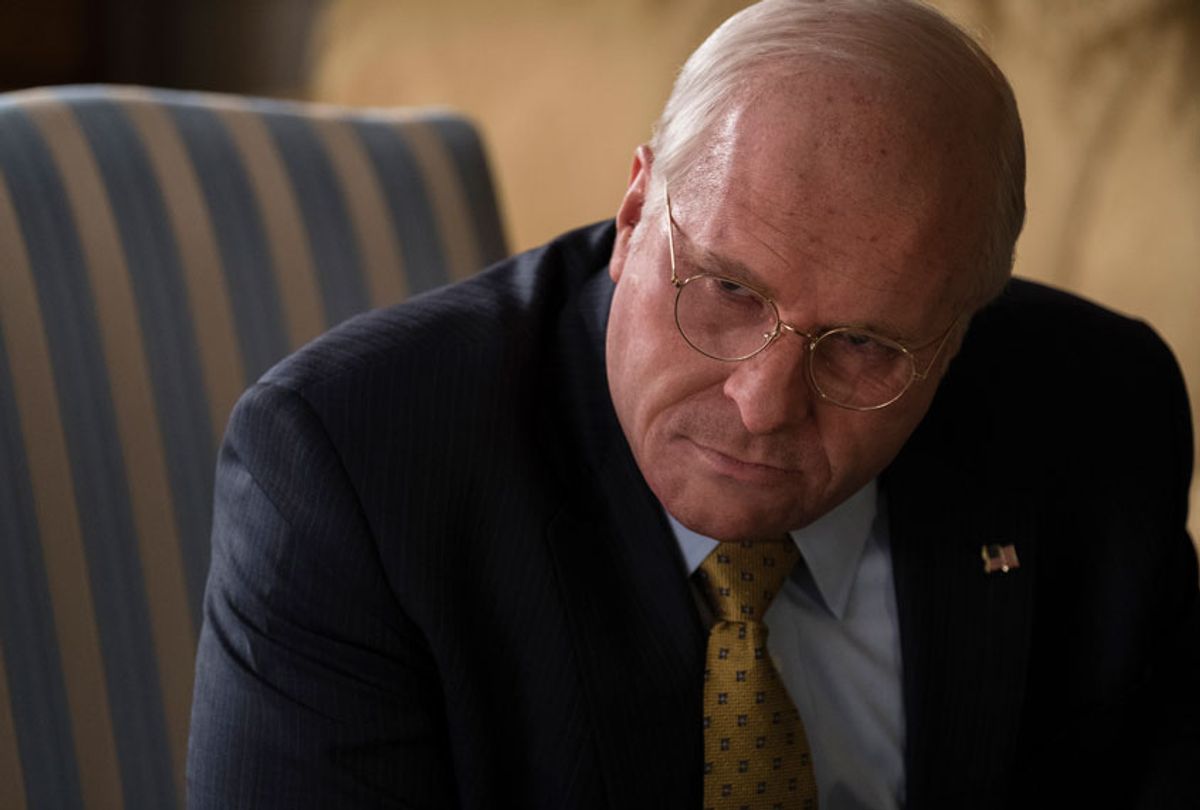 Adam McKay, the wisenheimer behind “The Big Short,” takes on Dick Cheney in his latest film, “Vice.” McKay smartly — and smart-assedly — connects the dots of how power was abused, most notably during the George H.W. Bush presidency. However, the writer/director cannot corroborate any of the assumptions he makes in the film; in fact, he opens “Vice” with a disclaimer, “We did our f**cking best.”

For most viewers, their best will be pretty damn good. The film’s first hour, full of sly observations about how Cheney came to and wielded power, is downright hilarious. On 9/11, where others saw confusion, fear, and uncertainty, Cheney saw opportunity. How he changed history, most notably with his unitary executive theory, is one of McKay’s main points.

But “Vice” is no dry civics lesson. It’s an irreverent, rollicking story narrated by a guy (Jesse Plemmons) who recounts key episodes from Cheney’s life — some amusing, some scary. The tonal shifts in the film are both its blessing and its curse. The fun stops about halfway through the picture, when Cheney becomes Vice President. There’s even a clever cue to signal this shift, practically daring viewers to get up and leave.

In the early parts of the film, McKay inserts photos or film clips rapidly, in the style of a “Monty Python” sketch, that provide punchlines to the action, as if he can’t get the jokes out fast enough. When Donald Rumsfeld (Steve Carell), addresses a group of interns — Cheney among them — he’s performing a stand-up routine. It’s comical and satirical, and it explains why Rummy appeals to Cheney.

McKay, however, can’t resist being crude and throwing in some real frat boy humor, from Rumsfeld’s priceless advice to Cheney about when to say “Thanks,” or a completely hysterical exchange with Kissinger (Kirk Bovill) and Ford (Bill Camp) about a “puppet show” on the White Houes lawn. But perhaps the most scandalous moment has Rummy responding to young Cheney’s question, “What do we believe?”

What is even odder is that viewers may actually find themselves rooting for these guys’ bad behavior when all of a sudden — dammit! — Carter becomes president. “Vice” really clicks in these moments, because McKay reveals how Cheney’s wild and extreme ideas were delivered in a reasonable fashion. The director marvels at it and celebrates it, regardless of his righteous liberal outrage. The approach is keeping in line with the film’s observation that the American people don’t want a complicated analysis; they want things dumbed down. There are even focus groups seen in the film to make this very point.

“Vice” isn’t dumb. It unpacks the unitary executive theory, it features pillow talk in iambic pentameter. Hell, Cheney even uses the word “perspicacity” when he’s trying to get elected to congress in Wyoming.

The film is also pretty sharp when Cheney’s wife Lynne (Amy Adams) has the opportunity to put her foot down and keep things in check. Lynne’s role in the story is interesting, as when she has to deal with her daughter Mary’s coming out (and consider the scrutiny should Dick run for office), as well as question her husband’s meeting with George W. Bush (Sam Rockwell) about a possible job opportunity. A lunch between Bush and Cheney is both wickedly funny and scary as both men get what they want, but don’t deserve.

However, McKay gets a bit heavy-handed in the film’s second act. It’s one thing to connect the dots with Halliburton, or the FCC fairness doctrine, but McKay can’t resist underlining his points by showing how laws are broken and then flashing on a sign that reads, “Wherever law ends, tyranny begins.” (That’s an apt John Locke quote, by the way).

And the abuses keep on coming. There are tax laws that benefit the rich, and torture laws that are bent or broken to “protect” America, WMDs that don’t exist as well as a political gambit that gave rise to ISIS. Cheney’s other bad behavior is also mentioned, from outing Valerie Plame to the shooting of a hunter that Cheney never apologized for. And to generate (fake?) sympathy, Cheney’s heart condition fells him at the most inopportune times.

There is almost too much going on in here, and by the time Alfred Molina shows up as a waiter offering Cheney and his cronies a list of “outrageous” menu options, it’s hard not to feel a little sour. That may be the film’s point — but it’s not nearly as chilling as Cheney’s final unapologetic direct address to the camera.

Bale’s performance is absolutely letter perfect, and he disappears into the role. The Academy Award-winner gives a very internalized performance that lets viewers know what Cheney is thinking, even when he’s trying not to, as when he gargles to keep Lynne in suspense about his conversation with W. A scene where he recounts his reaction to meeting Nixon is particularly revealing — and Bale’s Cheney deliberately does not reveal much.

In support both Amy Adams and Steve Carell are spot on, as is Sam Rockwell who plays W. with the right amount of genial idiocy. And viewers may marvel at the casting of Tyler Perry as Colin Powell, or an uncredited Naomi Watts as a newscaster.

Despite its unevenness, “Vice” is certainly satisfying for what it is and what it does. It will likely make viewers anxious to see what McKay will do should he make a film about Trump. Amy Adams already seems like perfect casting for Hillary Clinton.