How my kid found friends on "Fortnite"

Beyond a mere shooting game, Fortnite requires collaboration and communication — and can help build social skills 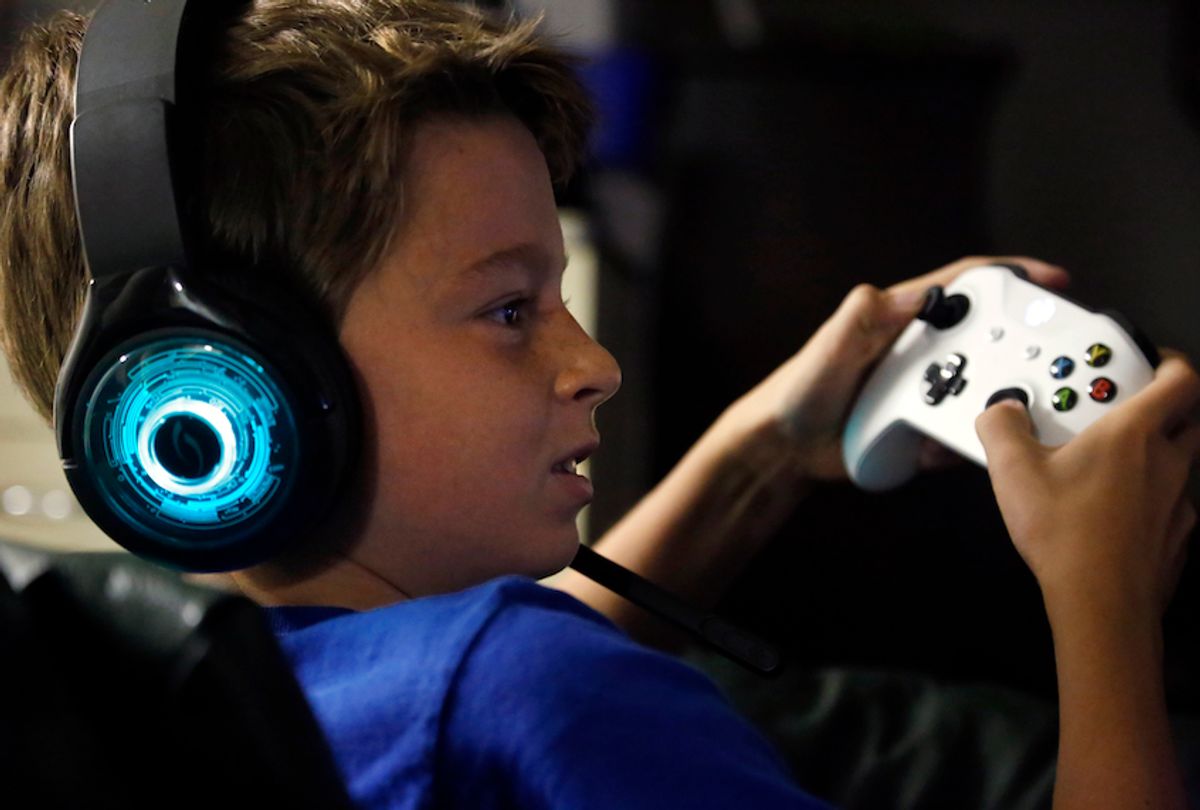 Henry Hailey, age 10, plays one of the online Fortnite games in the early morning hours of Saturday, Oct. 6, 2018, in the basement of his Chicago home. His parents are on a quest to limit screen time for him and his brother. The boys say they understand sometimes -- but also complain that they get less screen time than their friends. (AP Photo/Martha Irvine) (AP)
--

When we moved to a new town last summer, I wasn't sure how my 12-year-old son would make new friends. I saw lots of kids his age biking around our new neighborhood or playing ball at the park. But when you're 12, it's not easy to just walk over to a strange kid and introduce yourself. Plus my son was more interested in staying inside to play Fortnite and other video games, which wasn't helping. With the new school year approaching and my son's anxiety about going to a new school rising, I decided to take things into my own hands.

To my surprise, the response was overwhelming. I immediately heard from a mom who said my son sounded exactly like her son. More parents -- both moms and dads -- responded and expressed enthusiasm for getting our kids together. Since our kids were a little too old for traditional playdates, one mom suggested we connect our boys through Fortnite.

Before this suggestion, I'd written off Fortnite as just another shooting game. It was bloodless and cartoonish enough to make me feel somewhat comfortable with my kid playing. But I hadn't really paid attention to how much collaboration and communication was happening as players worked together to build defenses and fight off enemies. And it hadn't occurred to me that my son could meet new friends who could translate into real-life friends.

But the next thing I knew, I was sending Messenger chats back and forth with several parents trying to sort out which platforms were compatible (Xbox? PlayStation?) and what gamer handles our kids were using (coolboy2012, Smurf2cat). Eventually my son hooked up with about four kids through Fortnite, and they started playing together regularly. I'd hear my son's side of the tentative conversations as they slowly got to know each other by trading Fortnite weapons and teaming up to snipe enemies. Soon, my son was asking if he could go meet up with a new friend at the nearby park. The boy's mom sent me a message on Facebook, and we ended up chatting on the phone before our kids met in person.

As the school year approached, my son was super nervous about how he would manage the unfamiliar routines (new locker combos! New PE uniforms!). On the morning of the first day, as he scarfed down buttered toast and we double-checked his backpack for all the necessary paperwork, one of the Facebook group moms texted me. She wanted to see if it would be OK if her kid stopped by so he and my son could bike to school together. It's been two months and that same boy comes by every day.

My son seems to have more friends each weekend. Sometimes coolboy2012 shows up alone at the door asking to bike around the neighborhood. Sometimes smurf2cat brings a few friends, and they huddle around the TV screen as they watch each other win and lose elaborate Fortnite battles. I'm not too worried about the guns-and-weapons talk anymore because the pros clearly outweigh the cons. My son has friends to sit with at lunch, call with homework questions, and meet up with at the nearby burrito shop. I may have kicked off some of these friendships, but my son is keeping them going. And I'm confident that the next social hurdle he encounters, he can navigate himself -- with or without Fortnite.

Here are some tips for managing friendships and gaming:

Set rules for chatting. Every family will have different comfort levels around talking to strangers online through games like Fortnite. Whatever those rules are, make sure they're clear, kids understand them, and there are consequences for breaking the rules. In our house, my son wasn't allowed to use voice chat at first. Eventually we allowed him to chat with friends he knew in real life. Now, he's allowed to chat in any game, but he knows that if he hears any inappropriate talk or ever feels uncomfortable with the tone of the conversation, he should get off immediately. We also made sure he knows how to block players if necessary.

Listen in. If possible, keep gaming in a public place. That allows you to listen to the tone of the conversation (even if you can only hear one side). My son plays in the living room, so I can keep track of who he's talking to. This offers a chance to ask questions about the other players and get a sense of who your kid is playing with. It can also reassure you that your kid is having positive interactions and allows you to correct any misbehavior you notice.

Be cautious about real-life meet-ups. Though scary stories about pedophiles luring kids to meet in person abound, the reality is that that scenario is incredibly rare. But you and your kid should still use common sense when planning to meet an online friend in person. It was important to me to connect with a friend's parent before our kids met. If that's not possible, be available to supervise the meet-up until you're comfortable with the new friend.

Set limits. While I love how Fortnite has helped my son make friends, I don't love that he spends hours every day playing the game. Some families set firm limits on how much time kids can game or be on screens. We tend to be more flexible, and so long as he's done his homework and chores, he can game. But I've started paying closer attention to when he's playing with friends versus playing alone. If he's not chatting with friends, I often ask him to get off the game and go read or play outside. It's easy for him to get into the habit of gaming constantly. What I want is for him to be making mindful decisions about when to plug in -- and when to unplug.

Watch out for scams. The popularity of Fortnite has spawned a cottage industry in various scams, including fraudulent websites selling V-Bucks (Fortnite's in-game currency) and players selling their Fortnite accounts (which is against the rules.)