This Will Ferrell/John C. Reilly parody is so painfully unfunny we’re not sure it can legally be called a comedy 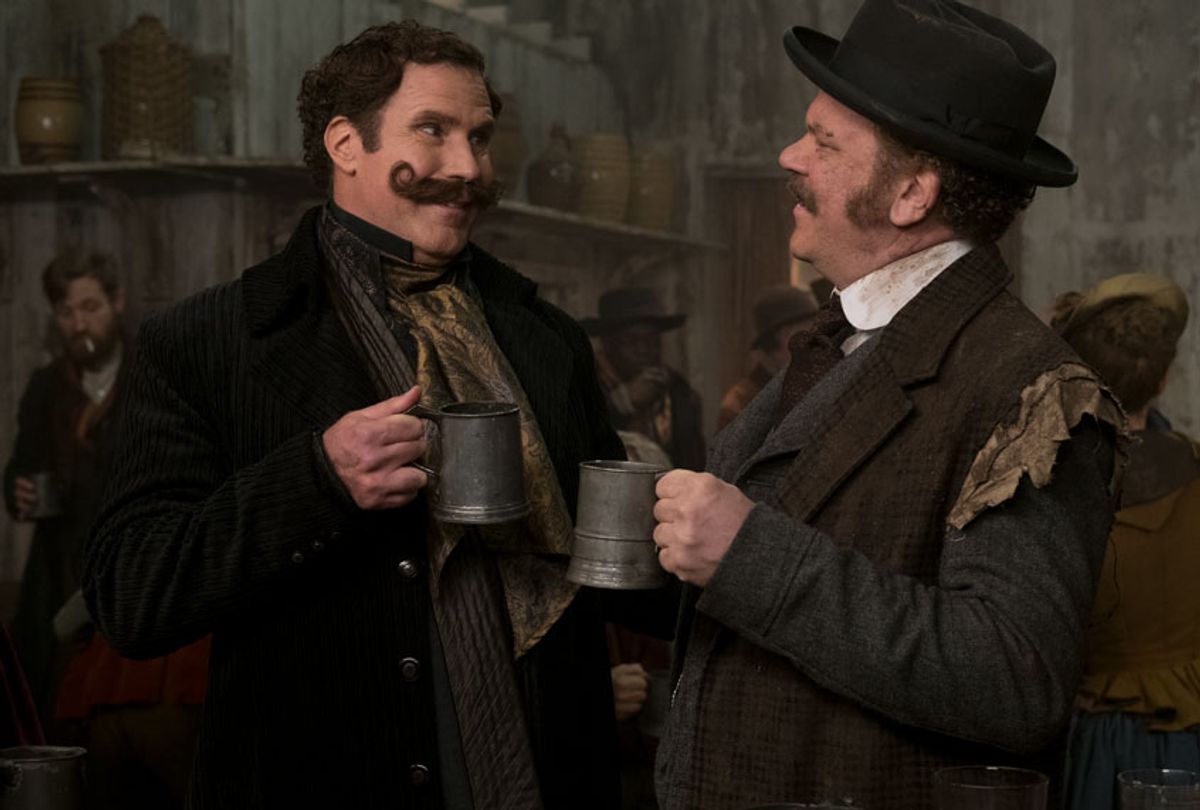 Remember that scene in Step Brothers, when a sleepwalking Will Ferrell and John C. Reilly end up wrecking their parents’ kitchen? My god, that was hilarious. What about that part in Talladega Nights, when Ferrell’s NASCAR champion and his best friend/sidekick say grace at the dinner table (“Dear Tiny Jesus, your golden fleece diapers and tiny little balled-up fists …”)? So riotous. Or how about any random scene from, say, Anchorman or Walk Hard? You can’t go wrong with the former’s “Afternoon Delight” sing-along, or anything in the latter involving drugs or Dewey Cox’s Dylan phase. We’re crying just thinking about them.

It’s easier, not to mention far less agonizing, to go back and just reminisce about those Ferrell/Reilly greatest-hits moments than to try and reckon with Holmes & Watson. It’s so painfully unfunny we’re not sure it can legally be called a comedy. Let’s put it another way: You know that story about the monkey paw, where a grieving mother wishes for something and her wish comes true, only it’s all twisted and wrong and horrible? Someone may have gotten a hold of one of those talismans and said, “I’d love a Step Brothers reunion, maybe with a recognizable I.P.” and then a rotting, shambling corpse is suddenly knocking on the multiplex doors. The idea of giving Arthur Conan Doyle’s famous characters to a great screen duo surely seemed like a genius idea. You’d almost have to willfully want to squander the notion to screw it up this badly. You’d also have to be ignorant of the fact that, even if with A-list comic talent capable of turning this into more than just the sum of its wink-nudge Sherlock-foolery, you have to give them something more than a rough sketch to work with. That, dear friends, is elementa … sorry, we’re too depressed by this whole thing to even finish the joke.

Perhaps it’s best to use deductive logic to figure out what exactly happened here. Observe, the high concept/low return ratio, suggesting someone merely scribbled down an elevator pitch at the last second before a meeting — “Um, Ferrell and Reilly as, ah, Sherlock Holmes and Dr. Watson” — then were surprised to suddenly get a greenlight. Look closely at the recognizable traits of Ferrell’s master detective and Reilly’s beta-male sidekick, all of which are slightly exaggerated for effect and retro-fitted for the stars’ personae yet never really utilized beyond reiterating: Yup, he’s smart but also arrogant and stupid, and the other guy’s his buddy! The desperate, extreme mugging of both actors — truly, a telltale sign that even they realized that the story, involving the escape of Holmes’ archenemy Moriarty (really, Ralph Fiennes? Really?) and a plot to kill the Queen, wasn’t much to hang gags upon, so they’d better make faces ASAP.

Notice, amateur sleuths, the anachronistic touches — Selfies! Pay-Per-View! MAGA hats! — and in-case-of-emergency-hit-someone-in-head crappy slapstick in lieu of an almost complete absence of actual jokes. Behold how a sequence involving Watson and Rebecca Hall’s female medical practitioner is take-off on a scene from Ghost, a movie that’s almost 30 years old, yet there’s a generic hip-hop-lite soundtrack in a “how do you do, fellow kids?” attempt to be hip. (There’s also a character who pretends to be a cat, because why not?) Peruse the IMDb page of one Etan Cohen, a gent with an impressive screenwriting resumé (he had a hand in the scripts for Idiocracy and Tropic Thunder), yet is the director responsible for the wretched Ferrell/Kevin Hart 2015 project Get Hard. Kindly note how what should have been no-brainer wins, like an Alan Menken-penned musical number and several parodies of slo-mo scenes à la the Robert Downey Jr. Sherlock movies, are virtually smothered in the crib.

And as we close the case file on this crime, perhaps it’s worth jotting down in the dossier that while it’s not unusual for studios to not screen movies for critics and whatnot ahead of time, the combination of a somewhat muted marketing campaign and slipping it into theaters on Christmas sans much promotion suggests that even the distributors knew they had a cut-bait situation on their hands. Also: You can only swindle audiences by thinking you simply throw A-list stars in anything and people will still show up, drooling like Pavlov’s pups, for so long before the echo in empty theaters is deafening. At one point in Holmes & Watson, a character goes undercover as a manure salesman and begins screaming, “Horseshit for sale! Will anyone buy my horse’s shit?” It’s the one genuinely honest, self-aware moment in the movie.