Good riddance to a bad year: Trump closes out the calendar with squirrelly Iraq visit

Trump ends 2018 the way he started it: with tantrums, tweets, and lies 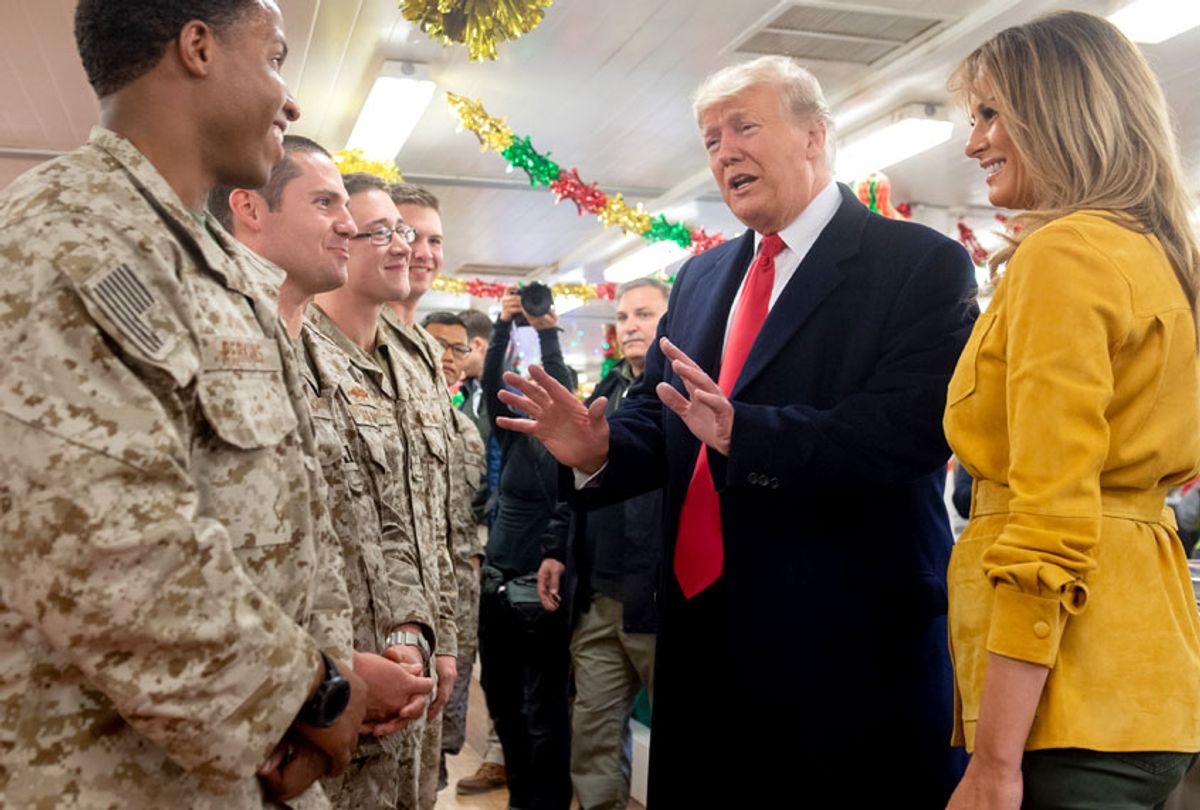 US President Donald Trump and First Lady Melania Trump greet members of the US military during an unannounced trip to Al Asad Air Base in Iraq on December 26, 2018. (Getty/Saul Loeb)
--

Could there have been any better way to bring the disastrous year of 2018 to a close than Trump’s fake moon landing trip to “visit the troops” in Iraq? I mean, there he was in a dining facility behind 20-foot blast walls and concertina wire piled so thick it looked like Don King’s hair, and he was telling a hundred or so combat veterans they aren’t “suckers” anymore. Has any other president in American history used the word “suckers” other than Poppy Bush when he was handing them out to his grandchildren?

He was on the ground at the Al Asad airbase in western Iraq for all of three hours. Punch up Google maps and have a look. If there’s any place in Iraq further out in the desert and away from it all, I don’t know where that is. A friend who has spent time there sent me a message and said you’d be safer at the Al Asad base than you would be at Boston’s Logan airport, it’s so remote and well defended.

So Trump jets in after dark on a military version of a business jet outfitted for the flight as Air Force One, and he’s whisked from a bunkered hanger to the dining facility, where the first thing he does is sign red MAGA hats handed to him by some of the troops.

Let’s stop right there with the red hats. WTF were a bunch of troops doing with MAGA hats in the middle of the Iraqi desert? There wasn’t enough forewarning for the hats to have been ordered from the States in advance, but there was a hint if you looked at them closely. All the hats, every one of them, looked like they’d never been worn. The back panels of the hats were folded in against the crowns like they are when stacked together for shipment — that is, like they had just been removed from a box and handed out by one of Trump’s aides. Trump has gone to great lengths since returning to the White House to say that the hats were the “personal items” of the troops. Right. They were so “personal” they had never been handled. They were brand new.

Trump himself was striding around all proud of himself in a shiny, billowing flight jacket that looked like it had just been unfolded from an Amazon box. In case you didn’t know it was him, his name was embossed on a leather patch sewn onto the jacket’s breast. After signing fake “personal item” MAGA hats, Trump posed for selfies with the troops. Later it was revealed that some of them were from the Navy’s Seal Team Five, a top secret outfit assigned to conduct anti-terror insertions into Syria in the fight against ISIS. Multiple commentators criticized Trump for “outing” the identities of the Seal Team members, supposedly putting them in danger if they are ever captured. As if other soldiers captured by the enemy in Iraq or Syria won’t be in danger because their faces haven’t appeared on TV. Okay. Gotcha.

Some of the troops who posed with him were in full combat gear, wearing helmets affixed with night vision goggles, bullet proof vests with loaded ammo pouches, knee protection, the whole kit and caboodle of going to war . . . except weapons. None of the troops were armed, despite the fact that it’s a hard and fast rule in a combat zone that every soldier carry his or her weapon at all times. So Trump’s big visit to his first combat zone was a bit like his appearances at NRA conventions, where no weapons are allowed. We want to arm kindergarten teachers, and we want everyone to have rights to open carry so they can defend themselves on those dangerous trips out to Walmart or McDonalds, but no weapons around us, because, you know, a little hypocrisy never hurts when it comes to defending the president of the NRA, or the president of the USA.

But let’s be fair about Trump’s Iraq visit. Sure, it was all a photo-op, Trump in his flight jacket, Melania in her military-style Victoria Beckham outfit that London’s Daily Express said cost $1,995. But so were Bush’s trips to Iraq, and so were Obama’s visits. Each of them was flown in and out in total secrecy, so the only way most of the troops they were supposed to be supporting would know they had been there was if the media covered it.

What set Trump’s visit to a combat zone apart from those of his predecessors was the circumstance and the lies. He had just announced the complete pull-out of American forces from Syria and all but fired his Secretary of Defense after he had the temerity to have disagreed with Trump’s approach to the defense of the country in his letter of resignation.

Trump treated his Iraq visit like a campaign rally. He railed against Democrats for not approving the funds for his wall on the Mexican border. He implied that before his presidency, the country had not fought wars to win, calling the national security policy of his predecessors “the prevent defense.” “Like, in football, where a team is holding the other team scoreless — they can’t throw; they can’t pass; they can’t do anything.  Now it’s three and a half quarters; they got to just hold them.  And they say, ‘Let’s change to prevent defense.’ And that’s what happens. And you know what it does?  It prevents them from winning. How many times have you seen that?  We don’t like prevent defense.  We want real offense and we want real defense. And that’s what we’re doing.”

He was out there in the desert of Iraq, he was surrounded by hundreds if not thousands of heavily armed soldiers, on the tarmac of the airbase sat the most deadly jet aircraft and helicopters ever designed by man to wreak havoc upon an enemy, and yet he was beset by the pesky demons that are always after him. The “media.” Those “other people” who don’t understand him and don’t have his best interests at heart. But not to worry, he told the soldiers and sailors serving thousands of miles away from home, exposing themselves to danger and death on a daily basis, he has “things” on his mind that he’s “doing.”

Every one of those men and women in uniform knew they had gotten a pay raise every single year for the past 10 years, and most of those raises had been in the vicinity of two, or three, or four percent, and they knew their most recent raise was nowhere near 10 percent. But that didn’t matter to the man in the ill-fitting flight jacket and red tie.

No, what mattered to him was telling the kinds of lies that he knew would be picked up on the television cameras accompanying him and broadcast back home on Fox News and repeated by conservative commentators keeping his supporters adequately misinformed so that they will continue to lavish their unquestioning adoration upon him as he goes into 2019 facing no less than 17 investigations and the inevitable indictments and plea deals that will bring him closer and closer to a day of reckoning he doesn’t need night vision goggles to see coming.

Trump wasn’t visiting the troops in Iraq. He was doing the same thing he did every single day for the past year with his lies and his tweets and his tantrums. Donald Trump was visiting his base.