Removing Trump from office would come at a steep price

There is no chance that he would go quietly. None! 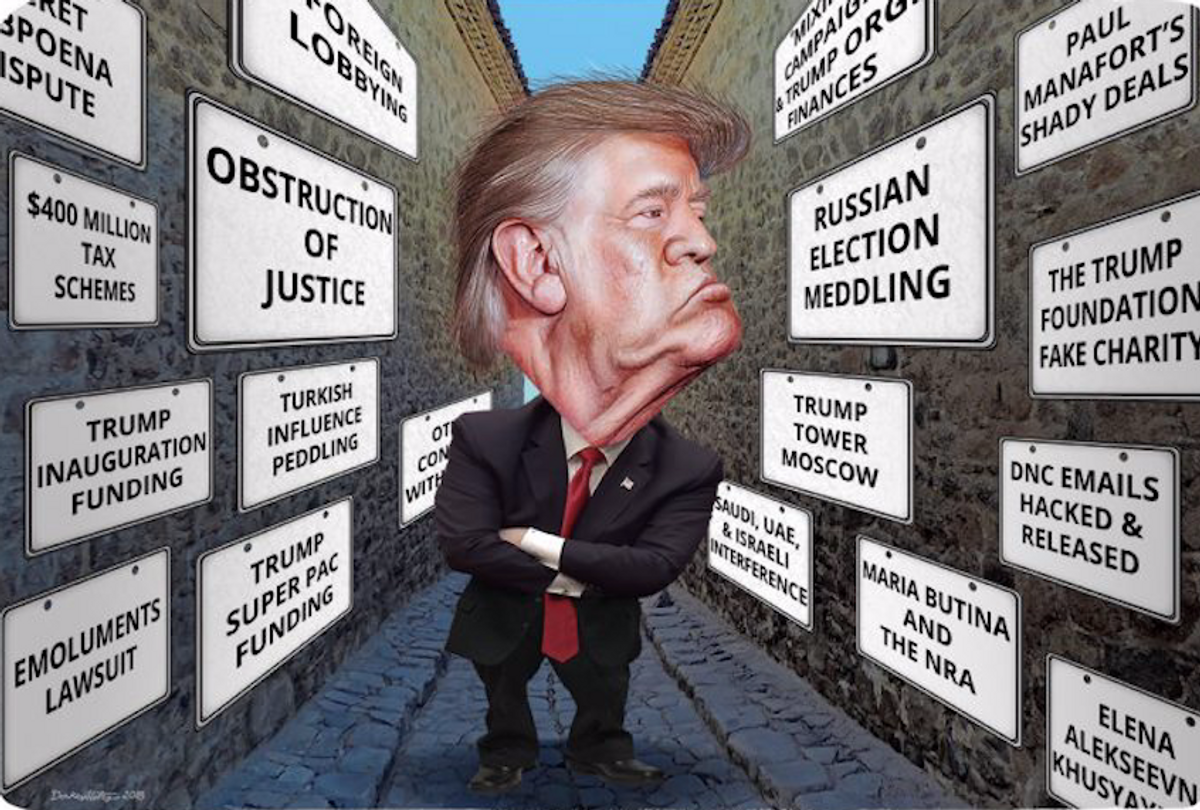 Nobody has ever done so much in the first two years of a presidency. (DonkeyHotey / WhoWhatWhy (CC BY-SA 2.0))
--

Lots of people are rejoicing at the prospect of President Donald Trump being exposed as a con man and a grifter. They believe that either a Democratic House or various investigations into Trump’s campaign, administration, foundation, and businesses will bring down the president. But people hoping for this outcome need to be very careful what they wish for — because that will only happen at a very steep price.

However, the many people giddy about the president’s mounting legal and political problems may not have thought things through. Because an indictment or an impeachment of Trump would not be the end, it would only be the beginning of something very, very bad.

As with so many things concerning the current occupant of the White House, there is no precedent for what would happen — but it won’t be pretty.

With one exception, US presidents have left office only because they decided not to run again, had served the maximum number of terms, died, or were defeated and peacefully handed over power. The sole outlier was President Richard Nixon, who resigned when it became clear that he would otherwise be impeached by the House and likely convicted of “high crimes and misdemeanors” by the Senate.

On August 8, 1974, he signed his letter of resignation, packed his things, got in a helicopter and left. That was it.

If you think that Trump would do the same in a similar situation, then you have not been paying attention. There is no chance that he would go quietly. None!

It is much more likely that he would burn the country to the ground in order to try to save himself. Because Donald Trump has never done anything that benefited anybody other than himself or his kids.

If this sounds far-fetched, then consider that the president is already laying the groundwork for this scorched-earth approach. On the one hand, he has conditioned his most loyal supporters to reject facts, to only believe what he tells them, and to overlook any of his transgressions. On the other, he has systematically undermined the press, the courts, and the investigation of special counsel Robert Mueller.

So, what do you think those supporters are going to do when he is impeached in Congress or indicted in a criminal court? Trump himself offered his thoughts on the issue last week: “I’m not concerned,” the president told Reuters when asked about the prospects of being impeached. “I think that the people would revolt if that happened.”

That might not be a far-fetched theory, especially if Trump fans the flames, which he would probably do if it looked like nothing else could save him.

And it would probably not even take an indictment or impeachment to trigger the president’s desperate fight for survival.

The New York Times reported last week that New York prosecutors have already checked the statute of limitations for the campaign-finance violations Trump is believed to have committed. They concluded that charges can be brought against the president if he is not reelected.

The likely result is that Trump will do anything to prevent that from happening, so look for unprecedented levels of propaganda, voter suppression, using government resources to dig up dirt on opponents, etc.

None of this is to say that Trump shouldn’t be indicted or impeached once it’s determined the facts warrant it. But if the case to do either isn’t absolutely watertight, then get ready for one of the nastiest chapters in US history. And even if the indictment or the impeachment is a slam dunk, Trump will still leave a path of destruction in his wake, so those in charge better proceed very carefully.

The cartoon above was created by DonkeyHotey for WhoWhatWhy from these images: Donald Trump caricature (DonkeyHotey / Flickr – CC BY 2.0), and walls (Leon Yaakov / Flickr).