"It's not propaganda from the evangelicals," Carlson claimed on his Fox News broadcast. "It's social science" 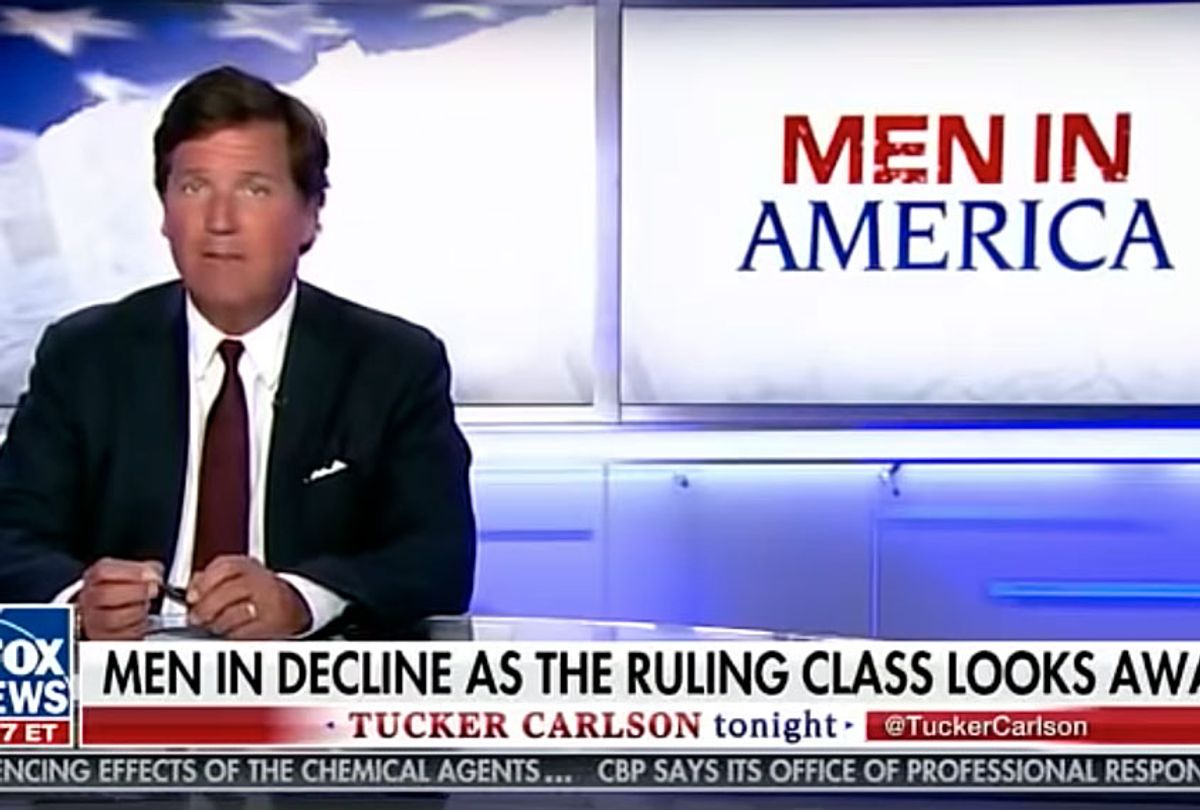 Fox News host Tucker Carlson on Wednesday claimed that, in areas where women outearn their male counterparts, there is "more drug and alcohol abuse" and "higher incarceration rates."

During a segment on his namesake show, "Tucker Carlson Tonight," the conservative cable news host complained about his show's chyron, which read "MEN IN DECLINE" — part of the latest installation of Carlson's "Men in America" broadcast that highlights the alleged challenges that American men face and stresses that women are fighting against oppression that could not exist.

Carlson, whose show lost more than a dozen advertisers in December after he claimed that immigrants make America "dirtier," proclaimed, "Male wages declined. Manufacturing, a male-dominated industry all but disappeared over the course of a generation. All that remained in many places were the schools and the hospitals — and both of them are traditional employers of women."

"In many areas, women suddenly made more than men," he continued. "Now, before you applaud that as a victory for feminism, consider some of the effects."

Carlson then cited unnamed studies which purported that women "generally don't want to marry" men who earn less than them.

"Maybe they should want to marry them, but they don't," the Fox News host continued. "Over big populations, this causes a drop in marriage, a spike in out-of-wedlock births and all the familiar disasters that inevitably follow: more drug and alcohol abuse, higher incarceration rates, fewer families formed in the next generation."

"This is not speculation. It's not propaganda from the evangelicals. It's social science," Carlson contended. "We know it's true. Rich people know it best of all. That's why they get married before they have kids — that model works."

Carlson, who previously labeled feminism as the new "F-word," once stated that the patriarchy is dead and that feminists want men to suffer — a patently untrue distortion that appears designed to whip up his base. "The patriarchy is gone: Women are winning; men are failing," he said.

"'The patriarchy is thriving,' [our leaders] tell us. 'Men are in charge and they succeed precisely to the extent they thwart the progress of women,'" he once said. "'Society is a zero-sum equation in which a man's gain is a woman's loss. This is wrong and we must rectify it.' That's the message. It also happens to be the core assumption of second-wave feminism, which became popular 40 years ago just as many of our Baby Boomer leaders were coming of age."

Though it has been 100 years since women were granted the right to vote — and significant progress has since been made — gender inequality persists in the modern world. Working women still earn less than men for the same job. In 2018, the World Economic Forum said "the world still has a long way to go" when it comes to equal political and economic leadership, since the group started following the issue in 2006.  The organization noted the global gender gap will take exactly 108 years to rectify, compared to 100 years last year, at the current rate of progress.

But modern-day feminism is not just about equal pay. It is about inclusion and fighting to equal rights for all American citizens. It is about dismantling society's gendered ideas about parenthood and mental health. It is about ending rape culture and adopting a sex-positive attitude. Ultimately, feminism is not about gender at all, as the movement seeks to demolish harmful gender stereotypes completely — an egalitarian goal that benefits everyone.