The Bronx city park that is making public land forage-friendly

Combining public space with edible gardens, the Bronx River Foodway might be the future of public park design 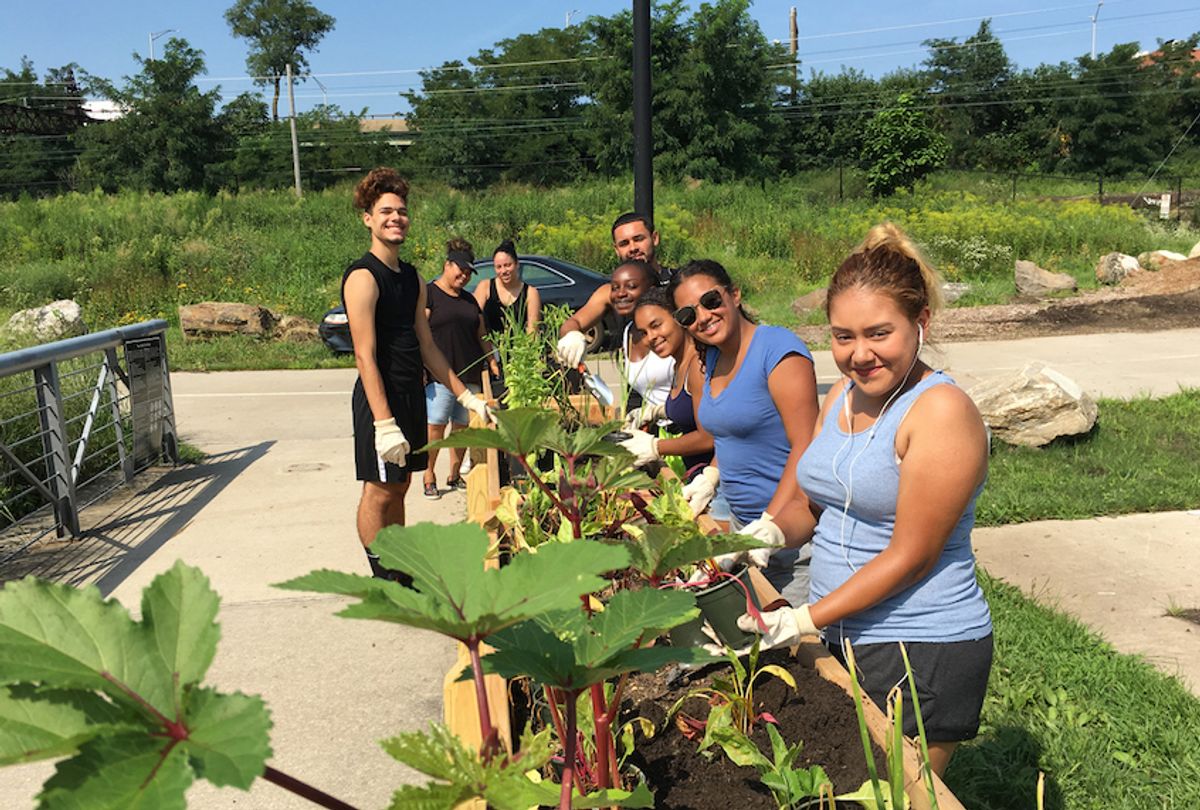 A team of farmers working at the Bronx Foodway as part of a program from Youth Ministries for Peace & Justice and New York City’s Summer Youth Employment Program. (Nathan Hunter/Civil Eats)
--

Urban noise blankets a section of the South Bronx along the narrow Bronx River. Dense evening traffic blares on the Bruckner and Sheridan expressways; subway cars clank on an elevated line, and a freight train idles on some lower tracks.

Amidst the sounds of the city, tall red metal sculptures, once part of a concrete manufacturing facility, mark a thin green oasis known as Concrete Plant Park. Since 2017, a pilot project called the Bronx River Foodway has run a public forage garden out of this small waterfront plot.

The Foodway differs from a community garden in that the plants are part of the decorative landscaping—there are no separate plots with veggies in rows. Instead, visitors can follow the garden’s meandering path through medicinal plants, pollinator-friendly plants, fruit trees, nut trees, and berries — and they can harvest as they go.

Integrating gardening into public park design, the experiment offers fresh food to communities that lack it. The neighborhood surrounding the park has one of the highest rates of asthma in the country and is also considered a “food desert,” where fresh and affordable fruits and vegetables are hard to come by. This status is especially ironic, considering that the 113-acre Hunts Point Food Distribution Center, which is the hub for 130,000 truck deliveries throughout the region every year, is nearby.

In addition to feeding the community, the creation of the Foodway aims for the triple goals of encouraging park use, promoting food education, and creating a cleaner environment. “Food is an amazing way to engage the public and address all kinds of issues,” said Mario Yanez of Foodscape Designs and nonprofit inhabit earth, the permaculture designer who played a key role in develop the park’s planting plan.

Foraging isn’t generally permitted in New York City parks, mostly due to concerns about liability and over-harvesting, which can be harmful to the flora and fauna. As a result, the Foodway pilot challenges long-held ideas about how public park space is designed and used.

“It’s a radical concept because parks are not spaces where you’re allowed to forage,” says Nathan Hunter, Foodway coordinator with the Bronx River Alliance and NYC Parks.

Still, foraging a concept that has gained traction in recent years around the world as a beneficial synthesis of farming and public space. While the Bronx River Foodway is the only foraging park in NYC, other cities around the country are starting to strike down their own anti-foraging laws, including Minneapolis and Boston. In fact, those pro-foraging laws actually harken back to pre-Civil War days when foraging was widely protected.

But as food law and policy attorney Baylen J. Linnekin wrote in "Food Law Gone Wild: The Law of Foraging," early anti-foraging laws were based on “racism, classism, colonialism, [and] imperialism,” targeting Native Americans, African Americans, and those living in the country.

Concrete Plant Park’s history is one of community collaboration. Once the plant stopped functioning in 1987, the property was slated to become part of a highway extension. But local residents fought for the creation of a park — and won.

The seven-acre project was completed in 2009 by the city’s Parks Department and the Bronx River Alliance and it’s now part of a greenway of connected parks that runs along the Bronx River. Growing food was not part of the plan until the floating art and food project Swale docked at the park for two summers in 2016 and 2017 and introduced summer youth workers to the delights of gardening. That’s when community organizers began to talk about growing food in parks, says Dariella Rodriguez, director of community organization and outreach for Youth Ministries for Peace and Justice.

Meanwhile, in a “great minds think alike” moment, Foodscape’s Yanez and NYC Parks were talking about a food project for the park. The parks department wanted to find ways to get more people involved with the land, says Yanez.

The first edible plants were planted in Bronx Foodway’s permaculture garden in 2017. All the plants on the grounds are useful: Bayberry is a vegan source of wax; Blue Mountain mint can be made into a tea and is a favorite of bees; and Lamb’s Ear has antimicrobial properties and can be used as a bandage, says Hunter of the Bronx River Alliance. Gardeners host garden tours and periodic cooking events to demonstrate how to use different plants.

Though most of the plants are integrated into the landscape, there’s also a community vegetable container garden at the south end of the park, where edibles such as tomatoes, eggplant, basil, a three sisters garden, and onions grow. There’s a row of ADA wheelchair-accessible raised beds as well. All the gardens are maintained by local community groups and the Parks Department.

One downside to the project is the cost. Although the garden is permaculture and designed to be somewhat self-sufficient, it still needs maintenance — like pruning the fruit trees for better yields — and because it’s also next to unmaintained Amtrak land, invasive plants and weeds often appear, as have volunteer goji berries, which came up recently and are flourishing (much to the community’s delight).

In planning the Foodway, organizers solicited the knowledge and desires of the community, rather than creating the garden and hoping people will like and use it. In fact, so many people showed up for the community meetings that the organizers had to find bigger spaces, says Dariella Rodriguez.

The Foodway is also a way of building community in an area with a large multicultural population — “everybody’s here,” as Rodriguez puts it — from Puerto Rico, Southeast Asia, several African countries, the Middle East, and Central America.

“You don’t have to speak the same language if we talk about a plant,” she says. “People can connect on, ‘This is what we do in my country with this plant,’ and, ‘Oh, this is what we call it in my country.’ That is a critical piece of building community and connecting folks.”

Local nonprofits and community members also hold events, such as cooking demonstrations using the Foodway’s produce and workshops on using medicinal plants. There are also non-food activities like yoga and drumming circles. Non-profit Sustainable South Bronx will soon be offering a horticultural job training program using the Foodway as the literal training ground and other similar workshops for community members who want to learn how to maintain the gardens.

Take Mario Rodriguez (no relation to Dariella). He saw the park from the 6 train one day and decided to stop by for a visit. He later helped plant some of the park’s trees and then helped plant the Foodways. As a vegetarian, he says, it’s difficult to find good produce at local markets.

“It was a great opportunity for me to plant some holistic herbal medicines plants,” he says. He’s a particular fan of echinacea, peppermint, and lavender.

We’re told to use public parks very specific certain ways and the Foodway design upends those ideas by introducing a  hands-on approach to nature. Case in point: People at community meetings asked whether the gardens should be fenced in to avoid people taking things, says Yanez, and he reassured them that taking things is actually the point; people should use the gardens, eat from them, and participate.

“It takes a while because we’re so locked into our habits and conceptions of how things have to be,” Yanez says.

The Bronx Foodway is one example of a trend of integrating edible plantings into public green spaces, which, by the very act, questions the purpose and use of these spaces.

Fallen Fruit, an arts collective in Los Angeles that created a public fruit-tree park, and Seattle’s Beacon Food Forest, are other types of urban food projects, although neither added food plants to existing city parks. In Philadelphia, the Fair-Amount Food Forest is an initiative to create a community food forest. In addition, Yanez is working on another edible park in Miami’s Coconut Grove neighborhood, and Hunter says he regularly gets inquiries about the Foodway.

Foodway organizers hope to create more foodways in other spaces along the greenway; Yanez is awaiting funding. But even an expansion won’t fill the fresh food needs for the entire neighborhood — there are about 7,000 people living in a single block in this area — nor is that the point.

“My dream is this space will be an opportunity to teach people how to grow in their own spaces,” says Hunter. “Hopefully we can allocate spaces in other public and private lands and residences.”