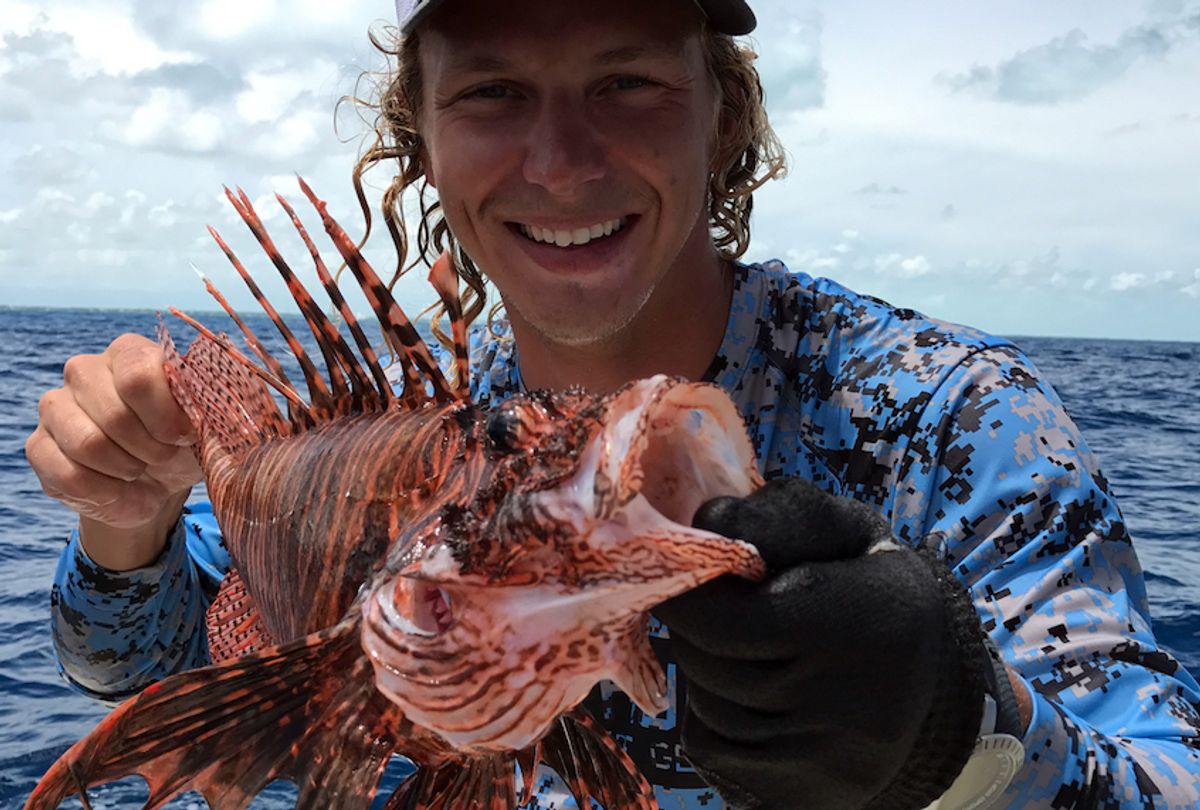 For the folks at Forever Young Charter Company, preparations for the Upper Keys Lionfish Derby start days in advance. Owner Tony Young and his crew fill up scuba tanks and ready their gear so on the morning of the derby, they can be out on the water early.

While it’s possible to catch a lionfish with a rod and reel, the name of the game on derby day is speed, and most teams use spear-fishing techniques in order to catch as many fish as possible. During the most recent derby, which took place in the waters around Key Largo from sunup to sundown over three days last September, 14 teams competed for the chance to win $1,000.

Put on by the Reef Environmental Education Foundation (REEF), the goal of the Upper Keys Lionfish Derby and others like it is to reduce the number of invasive lionfish, thus diminishing their impact on the reef ecosystem.

Before the sun came up on Sunday, Young and his team were already out on the water. “We were already at our first spot by the time the sun was coming up over the horizon, and [we were] jumping on our first dive when there was barely enough light to penetrate down in the water column so we could see what we were doing.”

Diving down in the early morning light, Young spotted a group of lionfish on the coral head. Careful not to damage the reef, Young started spearing, tucking his catch into a PVC container at his side. By the end of the day, Young’s team had caught 206 lionfish, narrowly losing the competition to another team.

Lionfish are native to waters around Indonesia in the Indo-Pacific oceanic region. The lionfish problem started more than 25 years ago, when the first fish were released into the waters of South Florida, most likely by the aquarium trade. Since that time, their numbers have grown exponentially, and they have spread throughout the Caribbean and Gulf of Mexico, as far south as Columbia and Venezuela and as far north as North Carolina.

Lionfish can grow as large as 18.5 inches in length and have venomous spines that prevent other marine species from eating them. They’re also predators themselves.

“They’re changing the composition of our reef fish communities,” says Stephanie Green, a marine biologist at the University of Alberta who has been studying the effects of invasive lionfish for almost a decade. “Lionfish are an invasive predator. They consume primarily fish but also crustaceans. There’s over 150 species of Caribbean fish that we’ve documented in their diets.”

In areas where lionfish numbers are high, Green has found the density of native species reduced by up to 90 percent—and many of these native species play vital roles in the reef ecosystem. For instance, lionfish are known to prey on juvenile parrot fish, which would otherwise grow up to eat algae off of coral, allowing the coral to thrive. Lionfish also eat other species that are ecologically important as cleaners that remove parasites from other fish. Lionfish have affected grouper and snapper populations, too, which are already imperiled from overfishing.

Despite the negative effects of lionfish, the purpose of derbies isn’t to wipe out the invasive populations. Green doubts that can be done. “We’re not going to eradicate lionfish, but we certainly can keep their populations in check so that we can manage their effects on the system,” she says.

Overall, the REEF derbies have removed more than 23,000 invasive lionfish since 2009. Altogether, this year’s derby harvested 1,192 lionfish from the waters surrounding Key Largo.

A new fish at the market

As a mild but meaty white fish, lionfish tastes similar to cod and lends itself to a variety of preparations. At the Upper Keys Derby, some of the catch became lunch: Local restaurants competed to cook the most detectible lionfish dish, with creations ranging from fried filets to lionfish ceviche. Chef Drew Tsang of Chef Drew’s Island Catering won the competition with his Lionfish Tempura with a sweet wasabi sauce.

The fish that wasn’t prepared in the derby’s official culinary competition was donated to Whole Foods. “The sustainability piece with lionfish is that there are too many of them in the water,” says David Ventura, Whole Foods Market’s Florida seafood coordinator. “So we’re trying to find more impactful ways to harvest them and restore balance to the ecosystem.”

“We were amazed with the customer enthusiasm and passion about lionfish,” says Ventura. “A lot of our customers were aware of the situation and just how serious the lionfish problem is, and right away, we started selling them.” Ventura says all 28 Whole Foods Markets in Florida stock lionfish, and the retailer has so far sold more than 75,000 pounds of lionfish.

Getting their stock of lionfish isn’t easy. Whole Foods relies on scuba divers — and partnerships with lionfish derbies — to bring a fresh catch of the invasive fish from the ocean to the supermarket year-round.

Still a ways to go

Despite the joint efforts of REEF, Whole Foods and others, the problem of invasive lionfish is a long way from being solved.

“It’s unlikely that we’ll get rid of all the lionfish from the system, because they’re in such a huge area and in such a huge variety of habitats,” says Green. “Submarines are seeing them at a thousand feet deep, which is not where they’re normally found. What we’re focusing on instead is controlling their numbers… essentially weeding the garden and keeping them from becoming hyperabundant to a point where they’re affecting our native species.”

Even though divers still encounter lionfish in abundance in more remote reef areas, Green says the derbies are working. She recently reminisced about the first derby, which took place in the Bahamas in 2009. In those days, the goal of derbies was to raise awareness about invasive lionfish rather than to control their populations.

Green’s study, “Mobilizing volunteers to sustain local suppression of a global marine invasion,” the first of its kind to analyze the effectiveness of the derbies at suppressing invasive species population, found them to be successful. Each year between 2012 and 2014, derbies succeeded in reducing lionfish populations by 52 percent in the observed area.

Green cautions that derbies aren’t a silver bullet, however: their effectiveness depends on a number of factors, including how many people participate and the severity of the invasion in any given area. Even though lionfish populations will bounce back over time, derbies have the potential to reduce their impact on native species.

“It feels really good to be able to help like this, even just a little bit,” says Young. “We all do what we can to protect the reefs so more people can enjoy them.”

Rebecca Renner is a writer for Civil Eats.