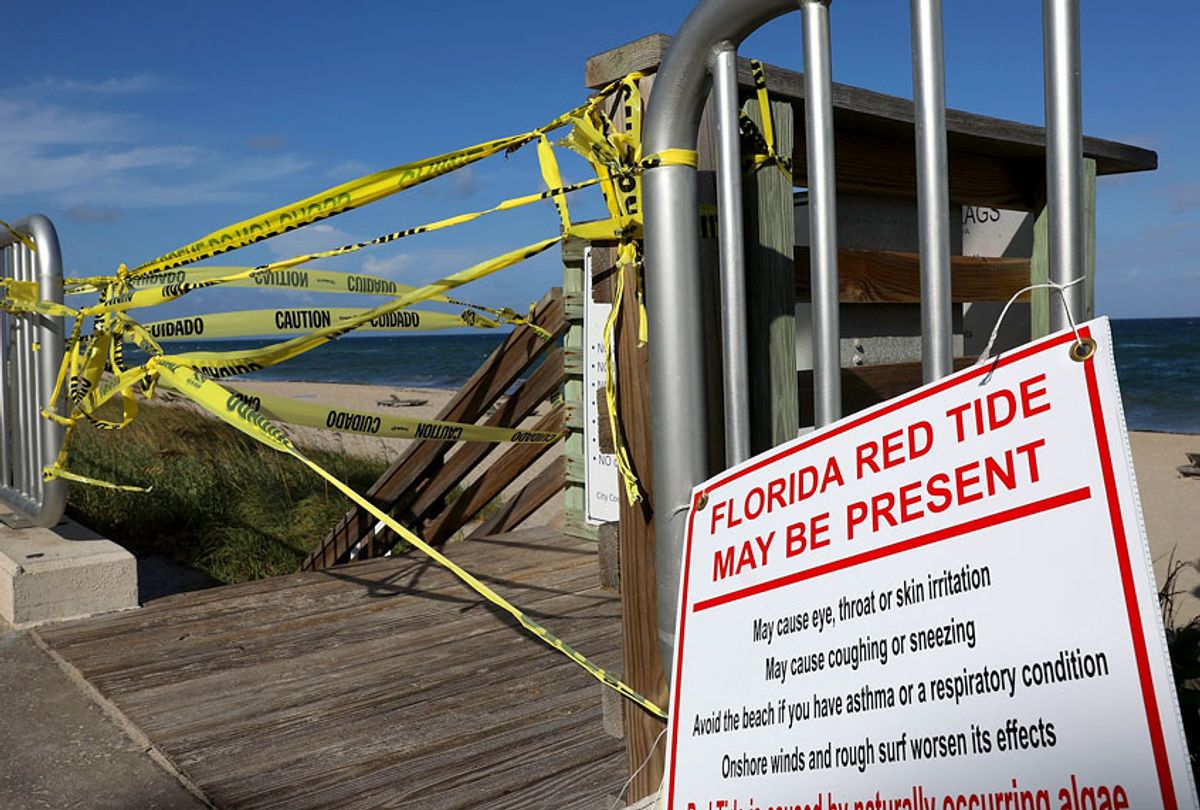 Caution tape closes off an entrance to the beach as Palm Beach County officials announced that all county beaches are closed due to red tide affecting coastal areas on October 4, 2018 in Lake Worth, Florida. (Getty/Joe Raedle)
--

For the past 14 months, various sections of Florida’s Gulf Coast have been at the mercy of a toxic red tide, caused by an abnormal concentration of a microscopic algae called Karenia brevis. The economic and environmental effects of a red tide are always devastating, and alarmingly, climate change may mean Florida's future consists of longer and more frequent red tides.

The ecological havoc so far includes the death of dolphins, sea turtles, fish, manatees, and a whale shark. Meanwhile, humans in proximity to the red tide — those living in coastal towns, for instance — have higher risks of respiratory issues. Red tides can cause economic ruin, too: Stone crab season in Florida is severely suffering, all because of the toxic algae that has worked its way up the coast from Sanibel Island to Tampa Bay.

Last week the red tide in the Sarasota area seemed to be waning, but it turned out to be only a brief reprieve, as high concentrations were detected just a few days ago. Scientists say that the bloom from November 2017 is still lingering.

Dr. Tracy Fanara, a staff scientist with Mote Marine Lab in Florida, tells Salon the situation is definitely “unique” but not unprecedented. 1953 marked an 18-month red tide episode. In 1994, a bloom started that lasted two years. It is not so much the length of these episodes, which are undoubtedly harmful to marine life, humans, and the economy, but the fact that they are so hard to predict and manage that makes them particularly perplexing to scientists.

Fanara said there are many different hypotheses as to why this one is so long and intense.

First, Fanara noted that NASA and NOAA have found that an active hurricane season contributes to red tide. As those agencies noted in a 2004 report, at the conclusion of a busy hurricane season:

Scientists Chuanmin Hu and Frank Muller-Karger of the University of South Florida, and Peter Swarzenski of U.S. Geological Survey, all of St. Petersburg, Fla., said there were several things that led to that red tide of 2005. The four hurricanes in 2004 brought heavy rain, and created a lot of runoff. Also, it is possible that a lot more ground water went into the ocean, and it flowed into the water from below the ocean floor. All of the nutrients (like nitrogen) that washed into the ocean helped create more of the algae that made up red tide.

The 2017 Atlantic hurricane season — when the red tide began — was hyperactive, to say the least.

In addition to a busier hurricane season, a rainy summer in Florida can feed nutrients to a red tide bloom.  In addition to the rain, a warmer winter means that the algae cells are less likely to get stressed, and more likely to survive and reproduce.

As the oceans temperatures rise, red tides may become longer and more common, particularly as warmer water helps sustain the red tide. Fanara says the minimum temperature off the Gulf of Mexico is rising more rapidly than the average high temperature.

“In my opinion, climate change not only plays a role with changing predations and biodiversity, but it can also play a role in shifting the typical bloom season,” she said.

In other words, it is only making the current situation worse.

“There are a number of possibilities,” she said. “We know the ingredients, but we need to find out the recipe.”

In October 2015, the journal Environmental Science & Technology published a letter penned by researchers at the University of Florida and the University of North Carolina who warned “because of climate change, we are at a crossroad with regard to control of harmful algal blooms, and must aggressively tackle the problem before it becomes so difficult that in many ecosystems we are faced with the option of allowing these micro-organisms to go unchecked.”

The state of Florida seems to be a bellwether for climate change disasters to come. Indeed, the Sunshine State, much of which is low-lying, may see many cities and swamps submerged by rising seas as polar ice melts.