In one of the first few signs of criminal conspiracy, Paul Manafort's link to Russian intelligence is revealed 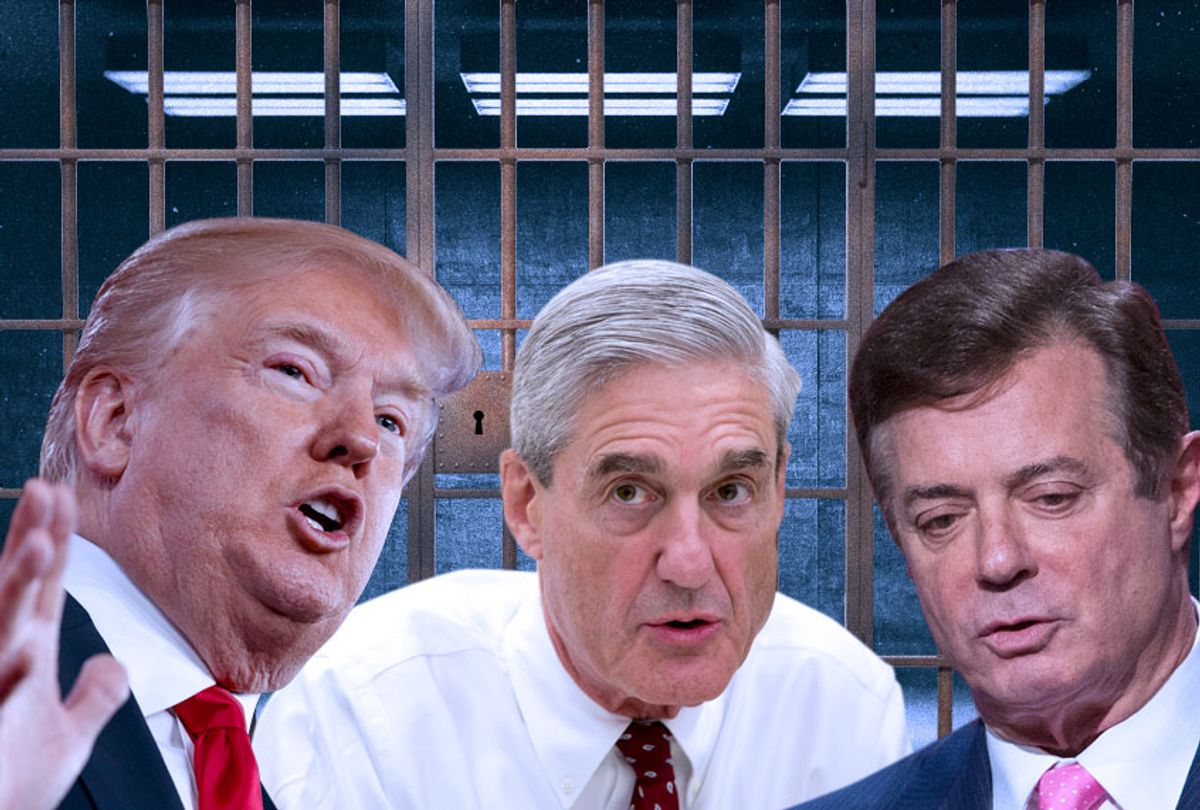 President Trump gave his first prime-time Oval Office address on Tuesday evening, and it was as wooden and predictable as expected. He's not a good teleprompter reader and his speechwriters rarely offer up any lines worth remembering. This speech was especially vapid since it basically just reiterated what he's been saying in rallies and press avails for three years now -- unauthorized immigrants and refugees are flooding into our country, bringing violent crime and disease with them, and we have to build a great big wall to stop them. These charges are either outrageously misleading or outright false, which the networks dutifully reported -- after the tens of millions of people who had watched the speech changed the station to watch something else.

According to the New York Times, even Trump didn't much see the point in this but apparently, the Republicans are very, very antsy with more than a handful in the Senate starting to balk. So this speech was to try to keep congressional Republicans on board. I guess we'll find out soon if it worked.

Meanwhile, the issue of declaring a national security emergency and deploying the military to build the wall is still on the table. It's looking more and more as if that may be Trump's only way out. As I wrote on Monday, he's used this excuse before to justify his trade war, so it's certainly not beyond the realm of possibility that his speech was just designed to be his "good faith effort" to appeal to the Congress before he goes it alone. His base will love such a macho display even if the right-wing pundits squawk, and since keeping them happy is his raison d'être that may just be enough.

To call that Oval Office address anticlimactic is an understatement. But it did serve one important purpose for the White House: It blunted the impact of a blockbuster day in the Russia investigation.

Perhaps the least surprising of the three big Russia stories yesterday was the news that the Supreme Court rejected the efforts by a "mystery" foreign government-owned corporation to resist a subpoena issued by special counsel Robert Mueller. It restored the daily fine imposed by a lower court that Chief Justice John Roberts had briefly put on hold so the full court could consider the issue. The fact that there were no dissents caused some legal observers to speculate that the court doesn't want to jump into the case at this point. Whatever the motives, it seems to have been a loss for the company, which will now have to start paying up until it agrees to the prosecutors' request. This decision did not shed any more light on the identity of this corporation, which has become an obsessive guessing game among those who are following this case closely. Whatever Mueller wants from them must be important since this has gone on for months and has now reached the high court.

The second big story was the announcement by the Southern District of New York of an indictment for obstruction of justice against Russian lawyer Natalia Veselnitskaya, who led the infamous Trump Tower meeting in June 2016 that included Donald Trump Jr., Jared Kushner and Paul Manafort. This indictment was for a different case involving a Russian company called Prevazon, which she represented in a case involving money laundering and New York real estate schemes around the same time as the Trump Tower meeting. The prosecutors have documentary evidence that Veselnitskaya was actually working for the Russian government, which she had denied under oath.

This case doesn't relate specifically to Trump or the Mueller investigation but since Veselnitskaya led the Trump Tower meeting and various pieces of these cases may intersect, there may be some coordination between the two prosecutors, if only to avoid stepping on each other's toes. Veselnitskaya is not in the U.S. so she won't be arrested unless and until she leaves Russia, but the indictment is another strand connecting agents of the Russian government to the Trump campaign.

The big story that goes right to the heart of the Mueller probe was revealed by accident. Lawyers for Paul Manafort, Trump's former campaign chair, filed a response to charges that he had lied to the special counsel's office and mistakenly made it possible for reporters and others to see some redacted material through a formatting error. That included a bombshell revealing that Manafort had shared campaign polling information with Konstantin Kilimnik, a suspected Russian intelligence agent who is himself under indictment by Mueller's team on obstruction of justice charges. The New York Times further reported:

Both Mr. Manafort and Rick Gates, the deputy campaign manager, transferred the data to Mr. Kilimnik in the spring of 2016 as Mr. Trump clinched the Republican presidential nomination, according to a person knowledgeable about the situation. Most of the data was public, but some of it was developed by a private polling firm working for the campaign, according to the person.

Mr. Manafort asked Mr. Gates to tell Mr. Kilimnik to pass the data to Oleg V. Deripaska, a Russian oligarch who is close to the Kremlin and who has claimed that Mr. Manafort owed him money from a failed business venture, the person said. It is unclear whether Mr. Manafort was acting at the campaign’s behest or independently, trying to gain favor with someone to whom he was deeply in debt.

Coincidentally, the Department of the Treasury has just agreed to lift sanctions against Deripaska's aluminum company, an odd decision under the circumstances, and one that House Democrats have vowed to investigate.

The redactions also mention a meeting between Manafort and Kilimnik in Madrid, apparently in the early months of 2017, and some discussions about a Ukraine peace plan, the details of which remain obscure.

This is one of the first clear reports of Trump campaign officials sharing information with people tied to the Russian government. Since it was revealed by accident in one small section of a legal filing, it's fair to speculate that it's not the only piece of evidence pointing to a conspiracy. The only question now is whether Donald Trump was personally aware of what his campaign chairman was up to. Most people who have worked with Trump have said it's unthinkable that he wouldn't have known about this or that he would have seen anything untoward about it, particularly since he was aware that currying favor with the Russian government would be good for business if he lost the election.

One thing we know for certain is that Trump has been very happy with Manafort's stoic resistance to Mueller's pressure to cooperate:

Manafort doesn't deny that any of this collusion happened -- he just denies lying about it to prosecutors, saying that he simply didn't remember doing any of these things. Trump is clearly grateful for his service.