Alexandria Ocasio-Cortez vs. the establishment: Which one has the real problem with truth? 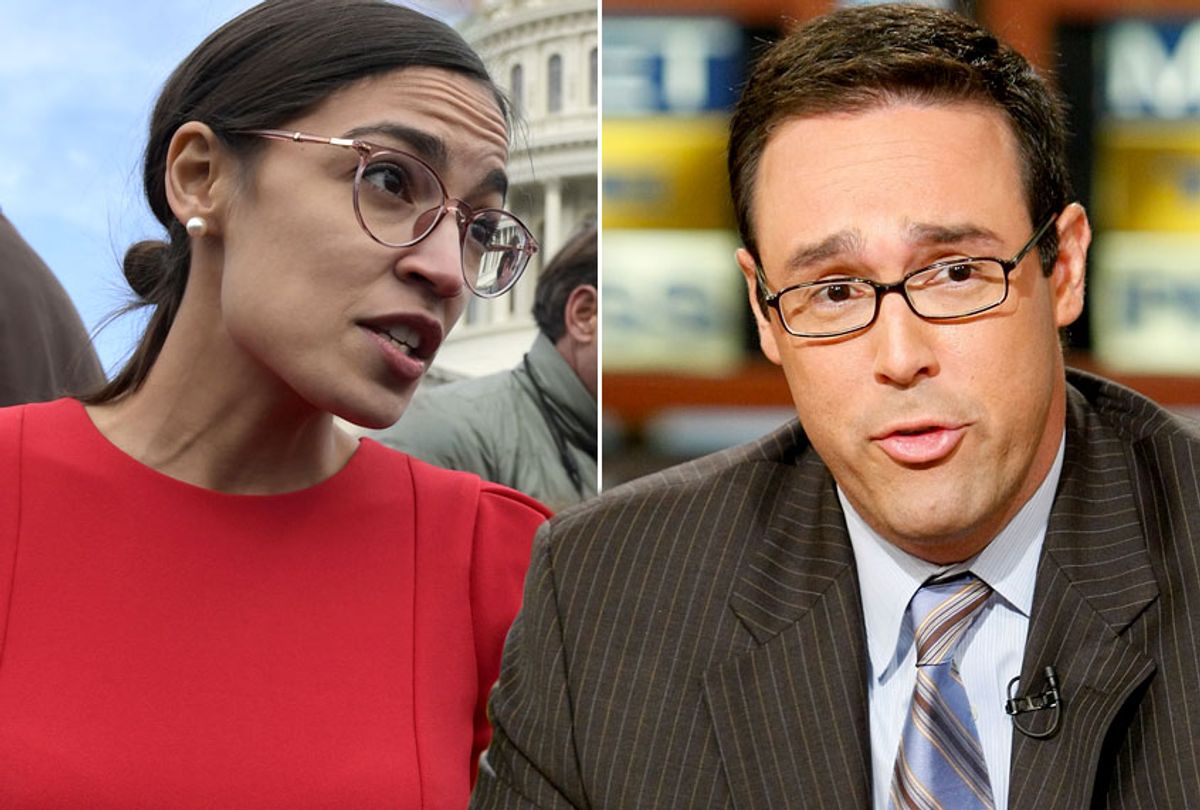 It’s hilarious how right-wing pundits and their social media universe react hysterically to almost everything that newly-elected Rep. Alexandria Ocasio-Cortez, D-N.Y., says, does or dances. But what’s much more serious — and even downright dangerous — is the way the so-called serious center, typified by fact-checkers, seem similarly unable to grasp what she’s up to, even when she uses very small words.

In December, as detailed here by Reed Richardson, the Washington Post fact-checked Ocasio-Cortez for being as bad as Donald Trump over a single tweet, which she had clarified within minutes of posting it, days before their fact-check appeared. Now, after her "60 Minutes" interview with Anderson Cooper, they’re proving it once again.

“Rep. Alexandria Ocasio-Cortez (D-NY) is fine with being called a ‘radical,’ believes President Donald Trump is racist, and is okay with sometimes fudging facts as long as she is ‘morally right.’” That’s how Vox described “key moments” from her interview.

Apparently, Vox is OK with sometimes fudging facts, because that’s not what Ocasio-Cortez said. In fact, it’s the opposite: She called it “completely necessary” to get facts right.  But a lot of folks — CNN’s Chris Cillizza, for example — seem strongly invested in pretending otherwise, because Ocasio-Cortez dared to make the added point that being morally correct was more important to the core purpose of public discourse.

We’ll  return to Cillizza below, but first we should note that Nobel Prize-winning economist Paul Krugman gave Ocasio-Cortez four “anti-Pinocchios,” as it were, for the most newsmaking aspect of the interview: her argument for a 70 percent marginal income tax rate on incomes over $10 million.

“Who thinks that makes sense?” Krugman asked, rhetorically. “Only ignorant people like … um, Peter Diamond, Nobel laureate in economics and arguably the world’s leading expert on public finance,” he answered. Then he added, “[I]t’s a policy nobody has ever implemented, aside from … the United States, for 35 years after World War II — including the most successful period of economic growth in our history.”

But here’s the thing: Diamond’s work (with Emmanuel Saez), estimating an optimal 73 percent top rate, was published back in 2011, as was work by Cynthia Romer, former head of Barack Obama’s Council of Economic Advisers, estimating an optimal rate of more than 80 percent. That was the same year as the debt-ceiling crisis precipitated by House Republicans on the one hand, and Occupy Wall Street on the other. As Krugman noted in a later column this week, it was the "winter of debt" when unemployment was still around 9 percent, but instead of being concerned about that, “Washington was obsessed with debt …. America was about to embark on a period of cutbacks in government spending unprecedented in the face of high unemployment.”

It’s taken seven-plus years and a Democratic wave election to finally get some common sense economics back into the national conversation — in this case tax policy, though that’s only one part of the picture.  As Krugman explains, the Diamond-Saez analysis rests on two core economic propositions: Diminishing marginal utility (meaning that an extra dollar means a lot more to low-income than high-income people) and competitive markets (meaning that everyone gets paid according to what they contribute to the economy).

The first of those things implies “that we shouldn’t care what a policy does to the incomes of the very rich. A policy that makes the rich a bit poorer will affect only a handful of people, and will barely affect their life satisfaction, since they will still be able to buy whatever they want.” The second implies that how much the rich get paid is irrelevant to the rest of the economy — except for the taxes they pay. “When taxing the rich, all we should care about is how much revenue we raise. The optimal tax rate on people with very high incomes is the rate that raises the maximum possible revenue.”

That’s where the 73 percent and 80 percent figures cited above come from: basic economic ideas rigorously applied and drawing on historical data. To the extent that markets aren’t perfectly competitive, Krugman notes, “this almost surely makes the case for even higher tax rates, since high-income people presumably get a lot of those monopoly rents.”

So, Krugman concludes, “AOC, far from showing her craziness, is fully in line with serious economic research,” but her critics “do indeed have crazy policy ideas,” most notably the supply-side thesis that “tax cuts at the top will have huge beneficial effects on the economy,” a claim that “rests on research by … well, nobody.” It also flies in the face of this illustrative chart Krugman provides, with marginal income tax rates on the left versus growth in real GDP per capita on the right. (The data has been smoothed over 10 years to reduce short-run noise.)

In short, there’s no empirical support for GOP trickle-down orthodoxy, and plenty of support for Ocasio-Cortez’s advocacy of much higher top tax rates.

“She definitely knows more economics than almost everyone in the G.O.P. caucus,” Krugman concludes, “not least because she doesn’t ‘know’ things that aren’t true.”

But there’s more to the story than just macroeconomics. In his 1991 book “Revolution and Rebellion in the Early Modern World," historian Jack Goldstone studied demographic and economic fluctuations over time and their relationship to political instability in England, France, the Ottoman Empire and China, developing a coherent theory of how those processes function together. In his concluding chapter, in a section titled “Selfish Elites and National Decay,” Goldstone writes that the reason those regimes fell was “because they had used their nation’s resources poorly. Inefficient tax systems failed to capture a growing share of national wealth.” He continues:

It is quite astonishing the degree to which the United States today [1991!] is, in respect of its state finances and its elites’ attitudes, following the path that led early modern states to crises. As in the past, inability to sustain international influence is merely symptomatic of deeper internal decay.

For example, lack of consensus among U.S. elites has virtually immobilized efforts to deal with a persistent federal budget deficit, and has hamstrung state action in many foreign policy theaters and in much domestic policy planning. The only consensus that has prevailed in the last decade is precisely that which history tells us is the most disastrous, namely, the consensus that private consumption should take precedence over all public expenses, and that raising taxes to realistic levels to meet state obligations should be fiercely resisted. Hence the U.S. government has been running a growing debt, sustained only by foreign borrowing.

So the wrong-headed GOP chorus of 2019 is not an isolated historical phenomenon. It's an integral part of the systemic dysfunction that has befallen America over the past 50 years, and just the latest example of a recurrent phenomenon that has been documented in multiple other historical examples across the millennia and around the globe.

The history of how such instability and dysfunction grows is much more clear-cut than the question of how it can be remedied or resolved. That's especially true given that we’re the first people in history to actually have some idea of the process we're in the middle of -- if we care to examine what has been learned about it in recent years. One thing is certain: The lessons conclusively show that much of today’s conventional wisdom — not just about taxes, but many other things as well -- is completely wrong.  The more diligently we follow it, the more certainly we seal our doom.

Which brings us back to Chris Cillizza, a leading arbiter of the conventional wisdom in all its self-important glory. “Alexandria Ocasio-Cortez's very slippery slope on 'facts,'” Cillizza tweeted (that was also the headline of his CNN story). Then he continued:

Cillizza responded by claiming he hadn't had enough space.

As Parker Molloy was perhaps the first to note, that simply wasn’t true:

Ocasio-Cortez's point about the GOP’s blatant tax-rate lies is worth an article all by itself. But worse than Cillizza’s phony "character count" argument was his admission that he included her full quote in his story — and then ignored it in his own analysis! In days of old, men simply didn’t listen to women. Now they listen, and even transcribe, but simply do not hear.

Cillizza scolds Ocasio-Cortez by saying: "Here's the thing: Being factually accurate and morally right isn't an either/or situation. You can do both!" As the transcript of her interview with Cooper makes clear, that was exactly the point she had made.

Ocasio-Cortez didn’t say it was a question of either/or. She said it was a question of priority, of prioritizing the important moral argument you’re trying to make. Failure to grasp that simple fact has been liberals' problem since the birth of Enlightenment reason, as George Lakoff has argued since his 1996 book “Moral Politics,” which I reviewed for the Christian Science Monitor at the time. Lakoff's 2004 book “Don't Think of an Elephant!: Know Your Values and Frame the Debate” was directly aimed at activists and became a bestseller, but still didn’t seem to penetrate at the highest levels of political leadership, where it matters most.

Until now. Ocasio-Cortez knows better, and she has shown that over and over again. Her point about the primacy of moral rightness cannot be emphasized strongly enough, and is in no sense opposed to making sure you get the facts and figures right. That brings to mind the famous phrase “budgets are moral documents,” which has long been associated with Martin Luther King Jr., although there's no documentation that ever said it.

We do know that King said this: “A nation that continues year after year to spend more money on military defense than on programs of social uplift is approaching spiritual death.” That was from his epochal prophetic sermon, “Beyond Vietnam,” and the sad fact is that 52 years later we have not yet gotten past the mistakes that led us into Vietnam and the lessons we ought to have learned there.

By insisting on putting questions of morality first, Alexandria Ocasio-Cortez is pointing the way forward, seeking to turn us away from that "spiritual death" and toward a future that includes us all.